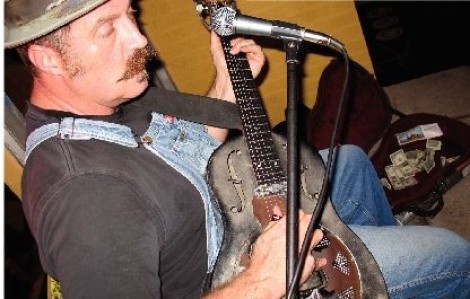 Where people with dollar bills pass by, buskers will congregate.

Often called street performers, their antics for pushing their art while simultaneously opening their hats or instrument cases to receive tips vary widely—from balloon-tying to juggling to playing music; anything to entertain—as do their ages and intentions. Regardless, from time immemorial, busking has been about more than trading tricks for dollars.

“Before there was recorded music, people had to see it live, typically from unpaid performers,” Parrish says. He’s busked the blues for more than 20 years and performed at the Downtown Farmers Market for 14. “It’s where I learned how to play music,” says Parrish, who, over the years, has seen the local busking scene grow organically, adding cultural value to city streets and the market.

These days, you can stand at any spot in the market and throw five stones at five different buskers, says Kristin Peck, Downtown Alliance arts and crafts market manager. After the market attracted a plethora of performers, the performances warranted management by the Downtown Alliance.

“By the time June hits, we have close to 100 on the listing [wanting to play], with 30-plus on any given Saturday,” Peck says. Buskers fill out an application and pay yearly city fees of $30 to perform in designated areas that include the farmers market, street corners and fairs.

Although Peck would like to see more day-to-day buskers on downtown’s streets on nonmarket days, she says “we’re really lucky to have the market turnout we do. There’s always some stand-out acts every year.”

This year’s summer market saw Eric Rich and Corbin Baldwin’s piano-bike—a piano transported via converted bicycle wheels at its base—draw hordes. City Weekly also met mime and accordion player Anthony Carpenter, who epitomizes the busker’s traveling spirit, stopping wherever he likes and earning travel money. His stint in Salt Lake City was brief before he headed on to Pennsylvania.

James Miska of Salt Lake City band Bramble also travels to busk. He’s currently on a three-week bike tour from Vermont to Virginia, with a few paid gigs along the way, but most of his performances will be busking.

Miska started busking to recoup some stolen money on a trip to Spain, then learned from talented troupes in New Orleans in 2008 while doing relief work. He persisted, although learning the busking ropes was a humbling experience.

“It can be hard, especially when you’re playing a song that’s meaningful to you and people just walk on by,” Miska says. “You have to swallow your pride.”

Fast-forward to 2009, when Miska founded busking band Bramble, currently on hiatus after losing a guitarist. “The first day at the [Downtown Farmers] Market was an overwhelmingly positive experience. We made over $100 in a few hours—all from dropped ones. That means over 100 people liked our music,” says Miska, who’s encouraged merely by people stopping to listen. They also provided a stark contrast to the glamour of the Sundance Film Festival earlier this year, with the four rough-edged youths of Bramble playing accordion, banjo and guitars on Park City’s streets—a spectacle that caught people’s eyes, ears and wallets. Miska says Bramble always makes more money busking than at hired gigs.

“It’s not always about the music,” Miska says. “There’s something about the novelty of what you’re doing. There’s just this magic that some [buskers] have. It’s this really spontaneous live performance that takes a lot of charisma and sheer determination.”

Jaecey Adams, 17, has that charisma. She’s been doing hula-hoop tricks—with her father on djembe—at the market for three years, and easily works a crowd into a frenzy.

“I have a steady stream of fans,” Adams laughs. “I like to be able to bring fun to people. Sometimes they don’t know how.” She also sells hand-made hoops but lets anyone play for free. However, if folks enjoy her show, tips are, of course, appreciated. “Every week I say, ‘This is my job, this is how get by, without tips I can’t come back.’” At a minimum, she’s content making people happy, enriching the market and adding character to Salt Lake City. “It’s good for everyone because it’s the out of the ordinary stuff that makes people smile, and [buskers] collect change by doing what we love,” Adams says. “That’s win-win.”