Pucker up Utah: Sour beers are creeping into the mainstream. 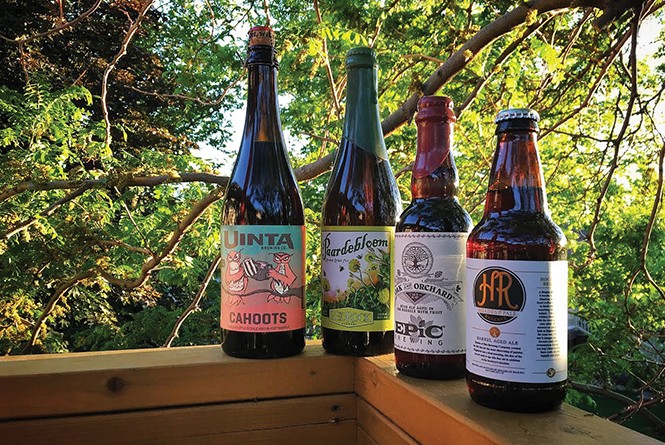 The first time I tried a sour beer, I wasn't a big fan. This was in 2003 when India pale ales were just starting to make their hoppy splash. Back then, it was all about caramel malts and big bitterness. When a close friend urged me to try Belgian sours, they made me wince—they were dusty, dry and jaw-lockingly tart. As I experimented with sour beers more, I began to understand the wisdom behind them. I was still in an old-school frame of mind, and I needed to approach them more like sparkling wine and less like beer.

Having gotten over the whole sour thing, my new problem was being unable to find these tasty brews. Living in Utah at the time was a bit of a challenge for a newly christened sour nerd. No local breweries were making them and few local bars had them on the menu. Fast forward 15 years, and not only have sour beers found an audience, but they're finding their way into regular production schedules at many of the state's top breweries. Right now, a half dozen or so local sours are available; here are four of my favorites.

Shades of Pale Bourbon Barrel Quad (13% ABV)
It pours a honey-brown color that's somewhat murky with ruby highlights. The tan head is about one finger deep and fades to a thin cap. The nose has bourbon with liquor-soaked cherries, vinegar and marshmallow. The taste starts with tart cherry and balsamic vinegar. Hints of cocoa and brown sugar come next with thin bourbon notes rounding out the back end. It's quite complex, has tons of flavor and is slightly slick in the mouth.

Uinta Cahoots Flanders Style Red (8% ABV)
Pours a clear ruby color with mahogany highlights. This beer has a two-finger-tall dense, foamy, beige head that quickly reduces to a large patch of thin film. The nose is vinous with spicy red wine, vinegar and tart cherries. Tastewise, it starts with caramel malts but quickly transitions to sharp cherry and a big smack of lactobacillic sourness. There are light to moderate flavors of vinous/red wine and vinegar in the finish. There is a lingering aggressive sourness in this beer, which was conceived in collaboration with homebrewer Rob Rutledge.

Red Rock Paardebloem (9.2% ABV)
With a slightly hazy golden peach color, this pour has a single finger of foamy white head. The nose is peachy and lemony with some dusty/sour notes. The taste starts with dry candy-peach-like sweetness that is followed by a vague floral bitterness. Next comes a touch of sourness along with some nice peppery notes; this provides a good balance for the big spicy/sweetness that the ale carries. As it warms, the toasted grains become more apparent and the sweetness becomes a little less pronounced. The sourness in this seasonal brew is more subtle than in previous years. Pro tip: Store it away for a year to bring out even more tart qualities.

Epic Oak and Orchard Syrah: Blueberry, Boysenberry and Black Currant (8.5% ABV)
This beer pours a nice ruby color with a minimal head that has light tinges of fuscia. The nose is a bouquet of raspberries, cherry and a hint of melon sweetness that's balanced out by a crisp, jaw-tingling sourness. The taste is excellent, as huge unripened berry and fruit flavors smack the tongue right off the bat. Nice puckering sourness comes next with a bit of balsamic sweetness rounding out the fruity tones. The end rewards the drinker with nice, dry-toasted oak flavors. It finishes slightly tannic and puckering, providing a great balance.

If you're feeling adventurous, you can buy any of these at their individual breweries. According to a trend forecasting piece by Bon Appétit, lactose-infused brews—along with sours and wine-barrel-aged beers—are set to make a big splash this year. Horchata stout, anyone?