Onward can't connect its emotional core to a world that feels fully-formed. 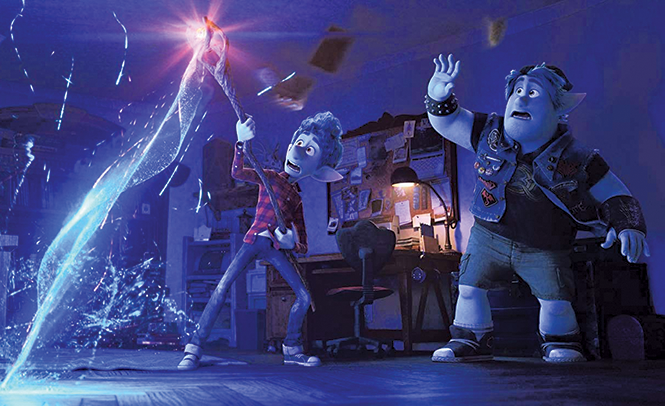 Onward introduces itself in a way that feels comfortably familiar—What if fantasy creatures had feelings?—and ultimately builds to an attempt at real emotional resonance. Yet there's something profoundly disappointing about Onward, in a way distinct even from its least successful previous films like Cars 2 and The Good Dinosaur. It's a narrative that treats its universe almost with a shrug, never offering a compelling reason why this story needed to be told in this setting.

That setting is a city called New Mushroomton, populated entirely by the kind of creatures you'd find strolling through a Dungeons & Dragons campaign: elves, trolls, dragons, centaurs and so forth. The focus is on a pair of elf brothers—timid teenager Ian (Tom Holland) and boisterous "gap year" young adult Barley (Chris Pratt)—whose personalities have evolved quite differently in the wake of their father's death before Ian was born. But they get an unexpected opportunity when the discovery of a wizard staff leads to a half-successful attempt to bring Dad back to life for a single day—he manifests as a pair of animate pants topped by a mystical sparkle—and launches a road trip for the magical object that will allow a fully-formed Dad to appear.

What follows is vintage mismatched-buddy-comedy stuff, built mostly around the clash between Ian's instinct to play things safe and Barley's enthusiasm about undertaking a real-life quest along the lines of the role-playing games he adores. Neither role is a stretch for the respective voice actors—Holland the squeaky adolescent, Pratt the good-natured doofus—but they have a satisfying enough chemistry that their scenes together carry Onward a fairly long way.

They have to, because it's not easy to connect to everything else that's going on here. The broad strokes for this world's back-story cast it as a land of magic that has forgotten that sense of wonder in favor of the technological modern world familiar to us, making both the reappearance of Ian and Barley's father and their mystical journey an attempt to recapture that magic. There's a faint hint of a big moral creeping around the edges of the narrative—about the life lessons that can be contained in mythological stories—but director Dan Scanlon (Monsters University) and his creative team rarely make the case that they know what to do with their world in the meantime. Sure, you're going to see some wordplay Easter eggs in the background based on variant names for well-known brands, but that's not the same as fashioning a world as visually striking as Coco's Land of the Dead, or Inside Out's mindscape. And while there are a few attempts at fun supporting characters—like a bunch of minuscule sprites with the attitude of a biker gang—Onward doesn't seem particularly interested in establishing the unique normalcy of "what would it look like if these creatures lived in our modern world?"

Because this is Pixar, Onward does build to a payoff with real emotional stakes, even as it involves a huge action set piece. That climax is well-executed and even surprising as a piece of filmmaking. But it's not quite enough to stick the landing when much of what has preceded it for 90 minutes feels like wandering around. A lot of Onward is based on the idea that for an attempt at magic to work, you've got to commit to it with everything you've got. As much as this story wants to end with a lump in the throat, the journey toward that moment involves too much that feels like a shrug in the shoulders.