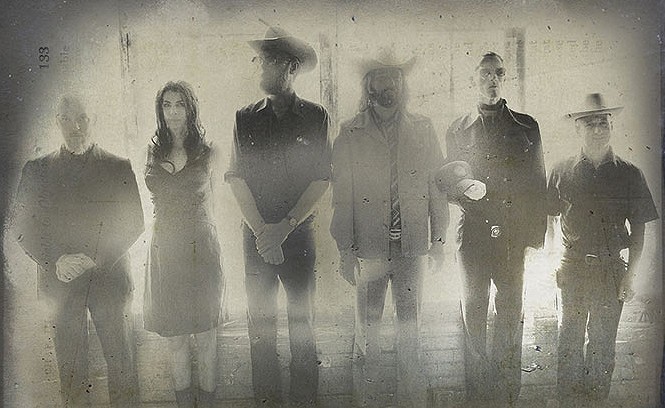 Maybe your bible is leather-bound with gilded, wafer-thin pages. Perhaps it's actually called the Bible. To a Slim Cessna's Auto Club fan, their bible might be a gatefold album cover with paper inner sleeves—and its title is more verbose. SC 102: An Introduction for Young and Old Europe, the Coloradan gothic country band's double-vinyl, single-DVD release, is a collection of parables, proverbs and lies. These were never intended to be anyone's gospel, but they inspire devotion just the same.

When you meet one of the indoctrinated SCAC fans, they evangelize in much the same way as a zealot of any denomination. It goes somethin' like this: "What? You've never heard of my god? You haven't heard his/her Word? Listen—and be forever changed!"

Cessna himself laughs at the notion that his band's followers are fanatical. "I think we do have that," he says. "The people that get it, get it really hard. I think music-lovers, which is what we are, get what we do."

A Slim Cessna's Auto Club song is the domain of deeply flawed characters. Like the six-foot-four, 220-pound, gold-digging, transgender heroine of "That Fierce Cow Is Common Sense In A Country Dress," who wants to find a gentleman to court her with "hard candy, chocolate bears, doodads and fox furs." Or, the musky, husky "Magalina Hagalina Boom Boom," who wants to teach co-lead vocalist Munly Munly that "beauty's deeper than skin." Or, the amoral fatcat Mr. Beerbohm, who, in "Hallelujah Anyway," forces a would-be preacher to impregnate his daughter, whom they both know will die during delivery—in order to carry on Beerbohm's bloodline. Some of these characters seek salvation and find damnation. Others rot in an earthly limbo, never finding answers. This makes SCAC songs intensely entertaining, relatable and even—like parables and proverbs—instructive.

Cessna gives all the credit to Munly. "He's been writing all the songs for some time," Cessna says. "As far as I'm concerned, he's on par with Flannery O'Connor in terms of the imagery and the American experience and superstition. He's so gifted and has such a wild imagination."

Delivery is key to the efficacy of SCAC's messages. When the band plays live, the bearded, bespectacled and behatted Cessna stands tall beside the shorter, gaunt but fiery Munly. Bathed in red, blue and purple light, the two sing as though every show is a hot, sweaty, crowded tent revival—which it certainly is. As fans stand shoulder-to-shoulder in front of the stage, the six-member band often does likewise. It's especially crowded on the SC 102 DVD, Live at the Lion's Lair, where five former bandmates join SCAC to celebrate the band's 20th anniversary. It's like the hoedown at the apocalypse—or, as Jello Biafra, erstwhile singer of the Dead Kennedys and proprietor of SCAC's former label Alternative Tentacles, put it: "[SCAC is] the country band that plays the bar at the end of the world."

Of course, when you start talking about the end times, that's when a lot of people stop listening. What's more, Cessna and company don't need to be deified. They're just a profoundly entertaining band that wants to continue being what they are. Devoted fans help keep them there, but there is such thing as overthinking something. After all, A Guide To Young and Old Europe is just an allusion to the fact that SCAC is trying to get a foothold in Germany.

That's where the record—which is more of a greatest-hits compilation—was originally released in 2012. Now, the band is releasing it stateside on their own label, SCAC Unincorporated, in order to re-introduce themselves to American audiences. To spread the Word, so to speak.

"I think that, when I was a teenager, it would've been cool to have a cult band," says Cessna. "You know, where only a certain population had ever even heard of us. But right now, we're just tryin' to pay some bills and figure things out."