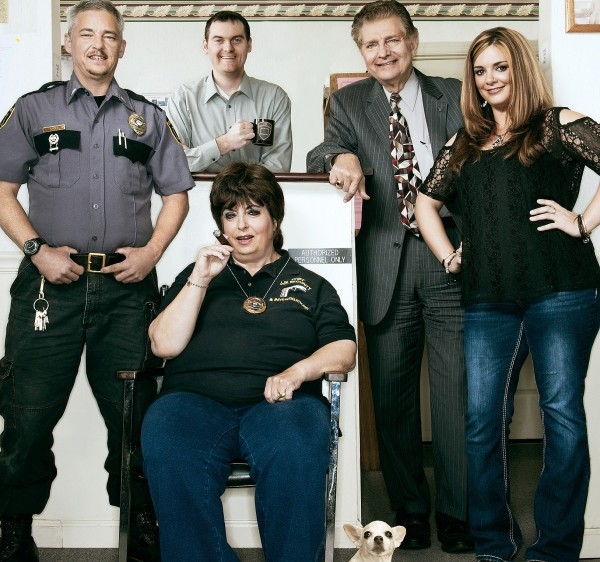 Season Premiere: When it premiered in 2012, Small Town Security (a reality-show tag-along to Breaking Bad) looked like just more quirky redneck filler taking up space on an otherwise respectable cable network. This year, compared to all the other realty suckage AMC has come up with since, it’s not looking so terrible—it’s still bad, just not BAD. Georgia’s JJK Security company is still a weird joint run by prospective David Lynch characters, namely breakout stars “Chief” Joan Koplan (think Liza Minnelli’s Lucille from Arrested Development on discount meds) and “Lieutenant” Dennis Croft (a transgender badass who used to be Denise); STS remains loaded with rubberneck-worthy moments. But how will it fare without its massive Breaking Bad lead-in? AMC has stuck by The Killing and Freakshow, so anything’s possible.

Bob Saget: That’s What I’m Talkin’ About
Friday, May 10 (Showtime)

Stand-up Special: Since his wallet-padding/soul-crushing days in the Family Zone on Full House and America’s Funniest Home Videos, Bob Saget has gained infamy as a dark and filthy comic on film, TV and stage—but is his post-TGIF shock-value shtick played out? Not in That’s What I’m Talkin’ About, a semi-greatest-hits stand-up special taped in Seattle in 2012 that places the love/blame for his dirty mouth on his father before descending into a bawdy barrage of acoustic-guitar tunes (if you loved the much-YouTubed “Danny Tanner Was Not Gay,” there’s more where that came from). Since Saget isn’t a material-cranking overachiever like Louis C.K.—or even John Stamos—there’s not much new here, but it’s a solid hour that makes you question the satanic intentions of the Olsen twins just a little bit more.

Movie: Lifetime’s latest White Women in Peril flick asks for even larger suspensions of disbelief than usual: 1. We’re supposed to buy that any man would have the urge—or balls—to leave Tricia Helfer. 2. Also, that the new woman she’s being shoved aside for is Estella Warren. 3. Estella Warren is still a working actor. 4. This isn’t the same Vancouver where every Lifetime movie since the Clinton administration has been shot … the list goes on. Anyway: In Dangerous Intuition, Helfer stars as a driven career woman who’s forced to share custody of her daughter with her ex and his new, seemingly ideal stay-at-home wife (Warren). When Helfer begins having visions of the kid in danger, is she losing her mind, or is the new wife really something evil, like … a mommy blogger?! Don’t want to spoil it; Helfer’s over-the-top “crazy” acting is a wonderful thing to be enjoyed either here or, more likely, on next week’s The Soup.