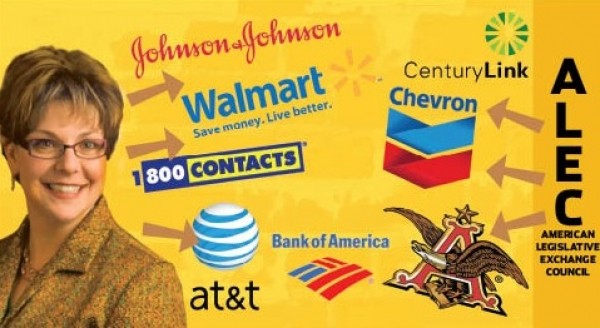 It was all pretty funny double-agent play until Feb. 26, 2012, when Trayvon Martin was killed. That’s when the American Legislative Exchange Council (ALEC) blipped onto the national radar, big time. The death of that young, hooded black man by neighborhood-watch volunteer George Zimmerman brought Florida’s “Stand Your Ground” law to light, and with it the people and corporations who helped shepherd it to passage.

ALEC touts itself as a “nonpartisan individual-membership organization of state legislators that favors federalism and conservative public-policy solutions.” But it is much more than that. The website ALECExposed.org has identified 800 pieces of legislation that were modeled by corporations for various state legislatures. That includes a host of educational-voucher bills, and others affecting consumers, health care, immigration and, of course, public safety.

And until the Martin case, ALEC managed to work in virtual secrecy—since 1973, when conservative kingmaker Paul Weyrich founded it and other right-wing organizations such as the Heritage Foundation.

Local legislators, of course, were well aware of ALEC, and it’s no surprise that 32 Utah Republican lawmakers belong to the group. That Salt Lake City Democrats Rep. Jennifer Seelig and former Sen. Scott McCoy joined up was surprising at best.

Seelig, who allowed her membership to lapse last month, says the whole thing was largely a joke. “Scott said, ‘Wouldn’t it be hilarious if you, a progressive female, and me, a gay male, were to join?’” Seelig says.

The idea was to “expose all of the inner meetings,” Seelig says. “I was a majority of one. I could have recruited progressive leaders from all over to fulfill a policy agenda but, ultimately, it was time and energy.”

After Trayvon Martin, though, Twitter was suddenly aglow with questions about her membership. “I got personally attacked on my Facebook page,” Seelig says. And according to Wikipedia-version history, friends of Seelig were “correcting” misinformation about her ALEC association.

Jesse Fruhwirth, former City Weekly writer and now OccupySLC activist, was so concerned that he invited Seelig to a confab at the Twilite Lounge. “We played pool, and I was trying to urge her to give a speech at one of the protests to clarify her role,” Fruhwirth says. Seelig called back to say she wouldn’t speak publicly because of her work issue.

That issue is her employment with 1-800-Contacts, which, incidentally, is the corporate co-chair of ALEC’s annual summer conference in Salt Lake City. Like many legislators, Seelig must tread a fine line between loyalty to her job and to her constituents.

“Jen Seelig’s record on social issues is unimpeachable,” Fruhwirth says. “But the interplay between government and business is very shadowy.”

Seelig, who sits on the House Law Enforcement and Criminal Justice Committee, actually traveled to Cincinnati in 2011 for an ALEC conference on public safety. Since the Trayvon Martin case and the resignations of many corporate entities, ALEC has disbanded its Public Safety and Elections task force. The reason, ostensibly, was to focus more keenly on economic issues.

Former Utah Rep. Sheryl Allen, R-Bountiful, understands the fleeing from ALEC. She did it herself almost a decade ago. That was when she was sitting on the House public-utilities committee, which was considering electrical deregulation. “Utah resisted deregulation—much to our glory,” Allen says.

Allen rarely left the Legislature during the session but heard about an ALEC conference in Seattle on electrical regulation. She decided to take a day to attend. “Off I went to Seattle, and in two days, I gained only two bits of information,” she says. “One was that global warming is a myth, and the other was that mercury in fish is not a real threat. … The information was so prejudicial that I said, ‘That’s it. I am completely disillusioned.’”

Allen had joined ALEC, as she had several groups related to legislatures. It cost only $50, and legislative funds paid up to $1,500 for travel. She no longer believes that taxpayer dollars should go to such travel. “It’s treated just like the National Conference of State Legislatures, but it is not unbiased. … The conference I went to seemed to be for sale.”

For sale or not, it is more the secrecy aspect that concerns Utah activists. The Alliance for a Better Utah is rolling out a website devoted to ALEC issues and complementing the ALEC Exposed website that came online after Trayvon Martin. The Alliance wants to compare model legislation from ALEC to bills proffered in Utah. “We want to understand which legislation is coming from ALEC and point out the companies to benefit from it,” says Alliance director Maryann Martindale. “Who are the corporate players and who donated to campaigns here?”

To this end, the Alliance has sent out questionnaires to legislators, asking them to fess up to their ALEC connections. Only Sen. Howard Stephenson, R-Draper, actually posts ALEC as a “personal affiliation” on his legislative website. “Most others don’t,” Martindale says. “We want them to throw off the cloak of secrecy and own it.”

ALEC’s secrecy, though, is its moniker. Michael Bowman, ALEC’s senior director of policy, recently reiterated a tired rationale to a NPR reporter—that legislators will speak more freely when they’re not being eyed by the public.

So far, the Alliance has heard back from only four or five nonmember legislators and three who are ALEC members. Ultimately, the Alliance would like voters to thank their legislators for this affiliation or to ask them to resign. The goal is transparency, she says. Martindale finds it ironic that the conservative majority in Utah wants legislative autonomy, and yet appears to act in lockstep with ALEC’s partners, however far-flung.

Seelig maintains she was never in step with ALEC, but some Democratic delegates think her association will affect her chances for legislative leadership in November. “You don’t know Jen very well if you think she’s sympathetic to ALEC,” says Rep. Brian King, D-Salt Lake City, who, like Seelig, is interested in the caucus-minority-leader position. “There’s no question to her loyalty to the caucus. The downside is that it looks bad to a number of people out there when ALEC comes to light.”

Still, King notes that those people won’t be voting on minority leadership. The close-knit House Democrats will, and “we’re both hard-core Democrats.” Seelig insists that the leadership position and her ALEC membership have nothing to do with one another, but ALEC has certainly taken its toll on her.

“The Legislature can suck the life out of you, and this is one example. It infiltrates on every level,” she says. Seelig seems to have become the unwitting target of progressives who want her to carry the torch against ALEC. She won’t. Maybe it’s the business ties; maybe it’s the joke gone bad. But she’s been burned once, and that’s enough.