Chemical Hearts leans into the big emotions of adolescence. 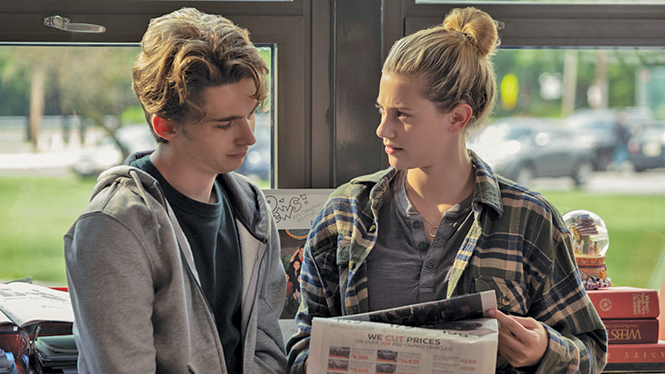 "You're never more alive than when you're a teenager," intones Henry Page (Austin Abrams) as Chemical Hearts begins—and that sentiment lies at the heart of the disconnect between those who embrace young-adult fiction, and those who scoff at it. Its appeal as a genre, often if not always, is a recognition that during the teen years, every emotion feels monumental. Whether the reader is a teen themselves connecting with the validation that, yes, the things they are going through are huge, or an older adult looking back in either wistful or relieved remembrance, the stories acknowledge the essential, necessary egoism of emerging from childhood into adulthood. No love has ever been greater, no heartbreak has ever been more profound—and don't be the fool to mock those feelings, because we've all been there.

On a certain baseline level, Chemical Hearts is about validating the tumultuous emotions of that time of life—which makes it an intriguing notion that it's built around an actual tragedy, rather than something that just feels like a tragedy. Adapting Krystal Sutherland's novel Our Chemical Hearts, the story follows New Jersey high-school senior Henry as he begins his stint as editor of the school newspaper. Assigned as his associate editor is Grace Town (Lili Reinhart), a transfer from a neighboring school who is a bit of a mystery. She walks with a cane, wears oversized boys' clothes and reads Pablo Neruda poetry. What dark secrets weigh on her heart?

It doesn't take long—and a little cyber-stalking by Henry, including that ongoing trope of movies about teens laboring under the misapprehension that 21st-century high-schoolers are on Facebook—for Grace's back-story to emerge. The passenger in a car crash that took the life of her then-boyfriend a year earlier, Grace is left with survivor guilt and uncertainty about how to move forward in life. The complexity of her character makes it an interesting choice that Henry, not Grace, is this story's protagonist, digging to find out the secrets of Grace's history even as he falls in love with her. His hobby of repairing deliberately broken pottery is an obvious enough metaphor that Grace herself draws attention to it, though that doesn't make it any less of a thematic underline.

But again, it might be missing the point to ask for a ton of subtlety from a narrative like Chemical Hearts. One of the story's through-lines is the need for Henry and Grace's school paper to come up with a theme for the year-end issue, which Grace suggests as "Teenage Limbo"—a recognition of the frustrating in-between-ness of young adulthood. In another subplot, Henry's older sister (Sarah Jones), a medical resident, deals with a recent breakup while explaining to Henry the physiological basis for love and grief. The common thread that emerges is one of reassurance: The stuff you're going through is normal, and natural, even if it means you feel like shit sometimes. It's even normal and natural to believe the emotions your feeling are the biggest ones that have ever been felt, though the person right next to you has experienced trauma that's by most objective measures much more profound. There's a lot of compassion in Chemical Hearts for Henry's adolescent self-absorption.

Chemical Hearts might have been much more effective if it could have navigated the bumpy road of its other filmmaking and storytelling choices. Screenwriter/director Richard Tanne—who oversaw a very different kind of romance in the Barack & Michelle Obama origin story Southside With You—relies a bit too heavily on montages, yet also provides a delicately handled sex scene built on the too-rarely-explored dynamic of an inexperienced guy and an experienced girl. And while it's interesting to build another subplot around the romantic angst of Henry's lesbian best friend La (Kara Young)—further emphasizing the universality of this age's operatic emotions—it also skirts the edges of tokenism. Everything revolves around Henry and Grace, and while Abrams and Reinhart are both solidly effective individually and as a pair, their chemistry as a couple is almost beside the point. As the title suggests, this is about a bigger kind of chemistry that connects us all. There's nothing wrong with melodrama being a feature, rather than a bug, if it's part of reminding people who need to hear it that they're not alone.