Marijuana's movie road from Reefer Madness to the mainstream.

Google "pot movies" and the resulting list is long, with each (relatively recent) suggested title a rompin' stompin' glorification of the good herb. But at the end of that Google list is the granddaddy of all weed films: the 1936 unintentional larf-festReefer Madness.

You knowReefer Madness, right? It's the original smoke-this-joint-and-you'll-go-fucking-bananas propaganda flick. Funded by a church group, this anti-weed story (originally titledTell Your Children) features typical teenagers—played by actors who look older than Judd Nelson inThe Breakfast Club—getting sucked into an underworld of speakeasies, joints, madness and murder. Apparently, if you smoke a joint (or to use the 1930s vernacular, "marijuana cigarette"), you'll end up a basket case...or you'll kill someone. The devil's weed is dangerous stuff!

So what happened between Reefer Madnessand Harold and Kumar's epically comic and weed-soaked trip to White Castle 68 years later? It wasn't all madness and mayhem for decades, followed by an easy switch to acceptable cannabis consumption. Charting the switch isn't an exact science, but there's a rough timeline if you look hard enough.

There was a second 1936 anti-marijuana film—simply titledMarihuana—in which smoking pot leads inevitably to skinny dipping, drowning, unintended pregnancy, becoming a drug kingpin, heroin use and, finally, kidnapping your own child (no shit). In fact,Marihuana's plot makesReefer Madnessseem downright tame. There are contemporary soap operas less outrageous thanMarihuana(though its camera work makesReefer Madness look like it was shot by Gordon Willis).

Flash forward to 1949, and the moralizing takes a new tack:She Shoulda Said No!features Lila Leeds, an actress arrested in a 1948 marijuana bust along with Robert Mitchum. Leeds is Anne Lester, a woman drawn into the world of weed and its accompanying wickedness. What makesShe Shoulda Said No!more than a footnote in history is the fact that Leeds' career never recovered. Mitchum's career, on the other hand, flourished—because sexism.

The pivot to softer marijuana depictions can be seen tangentially with the release of and acclaim forThe Man with the Golden Armin 1955. Frank Sinatra stars as a cleaned-up junkie who struggles to stay straight after being released from prison. He gets strung out again, but finally overcomes his addiction. The drug is never named, but it's clearly heroin. Compared to heroin, marijuana is as dangerous as whole milk.

By the 1960s, marijuana as a hoot is practically de rigeur, if discreet. For each Sonny Bono irony-free educational film such as 1968'sMarijuana, in which Sonny has all the energy of a somnambulist, there are movies like Bob Rafelson's Headand Stanley Kubrick's2001: A Space Odyssey, also from 1968, that don't mention marijuana specifically but definitely feed into pot's mainstream acceptance. The2001one-sheet even had the line "The ultimate trip" written right across the top. 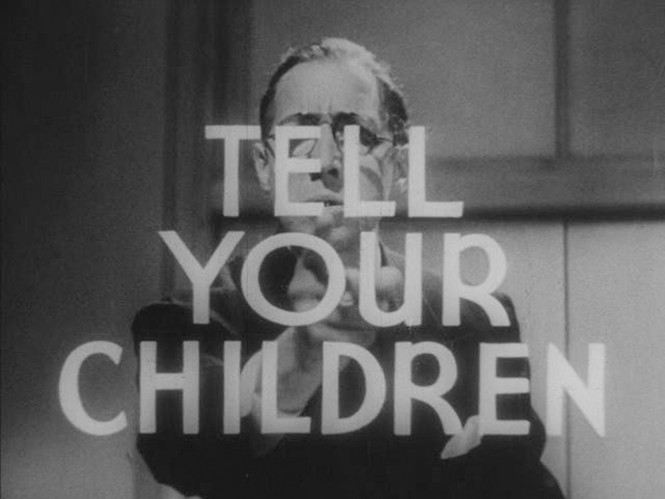 Arguably, the big weed coup de grace came in 1969 withEasy Rider, the ultimate counterculture flick. Directed by Dennis Hopper—loosely—it features a star-making performance by Jack Nicholson as a drunk attorney reluctant to smoke pot—because it's a gateway drug—until Peter Fonda tells him it's really no big deal, man. (Fonda and Hopper smoke up throughout the film after selling cocaine to finance their road trip.)

For all ofEasyRider's freedom-pushing ideas, it plays a darker hand throughout; as the trio travels deeper into the American South, their lifestyle is questioned and ridiculed until ultimately, Nicholson is beaten to death by rednecks during a campfire raid. Fonda and Hopper are later shot to death by guys who have about three teeth between them. But fuck the movie's politics.It made an ass-ton of money, made a star of Nicholson (whose performance is really just OK) and ushered in New Hollywood, which meant Robert Altman could makeMASH, an anti-Vietnam movie disguised as a Korean War movie, in which a bunch of Army officers smoke pot on the sidelines of an illegal football game.

Open and acceptable marijuana use becomes frequent in movies of the 1970s. There's Ralph Bakshi's godawfulFritz the Cat, the X-rated animated movie featuring a bastardized version of Robert Crumb's creation;Taking Off, Miloš Forman's English-language debut, featuring a hilarious scene in which Vincent Schiavelli instructs parents of runaway teens how to blaze up in order to better understand their kids; National Lampoon's Animal House, in which Prof. Donald Sutherland gets the bulk of the cast stoned; andCheech & Chong's Up in Smoke, a movie in which marijuana might as well be listed third in the credits after Cheech Marin and Tommy Chong.

But I'd argue the moment marijuana became completely mainstream was December 1980, when9 to 5became a box office smash. Lily Tomlin, Jane Fonda and Dolly Parton are sexually-harassed office workers who decide to give their rapey boss Dabney Coleman the what-for. In a scene for the ages, the three women smoke a joint procured from Tomlin's son and fantasize different ways to get even with the big cheese. They're all variously funny, but when Parton ties Coleman up like a show calf, you just know weed is no longer taboo. After all, if Dolly's cup of ambition has a little weed in it, does it really matter if yours does, too?