A slow-motion academic protest of fascism emerges after conference. 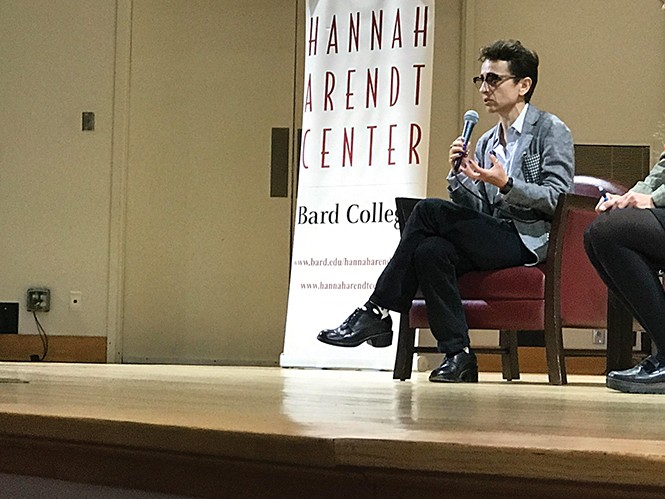 The great Russian-American writer Masha Gessen was on the stage last month at New York's Bard College in front of a sign that read "Crises of Democracy." It was the name of a conference sponsored by the school's Hannah Arendt Center for Politics and Humanities.

"I think it's safe to say that all of us are living in a state of low-level dread, always suspecting that we are missing something of enormous impact while chasing something else of enormous impact," she said, standing at the podium with short dark hair, thick glasses and a stylish sports jacket. She resembled the famous portrait of a young Arendt, one of the 20th century's most influential political theorists.

A journalist and author, Gessen compared her experience in Donald Trump's America over the past year to that of living under Vladimir Putin when "the only skill I had really honed for more than 10 years was the skill of protecting the views I already held."

Gessen's newly released book, The Future Is History: How Totalitarianism Reclaimed Russia, follows seven different characters from the 1980s through the present. It weaves together narratives of their lives into a vast tapestry that, among other things, presents the brief rise and swift destruction of gay rights in her home country—a development which caused Gessen, who immigrated to the U.S. as a teenager and returned to Russia as a reporter, to go into exile once again.

Among the book's main subjects is Alexander Dugin, the far-right ideologue behind Putin's nationalism. Dugin has influenced Steve Bannon and Richard Spencer, who is married to Dugin's primary English translator.

Gessen recounts that in 1984, Dugin was in love with Evgenia Dobryanskaya—who later became an LGBTQ rights activist—and then follows them, tragically, to the present.

So enthralling was her speech, that I didn't pay much attention to the other conference speakers. So, I was taking a quick nap and missed the speech of Marc Jongen, who's the Dugin of the AfD, the far-right Alternative for Germany party. Jongen got somewhere around 13 percent of the vote in a recent election, securing him a seat in parliament.

Things were quiet and respectful, and it seems I was not the only one snoozing through fascism. But last week, a group of 50 professors and academics wrote an open letter to The Chronicle of Higher Education condemning the center for lending its legitimacy—and the legacy of Arendt—to the extreme and violent positions of Jongen and the AfD.

"The AfD subscribes to a nationalist far-right agenda and is closely allied with the violent street movement 'Pegida' (Patriotic Europeans Against the Islamization of the West) that attacks refugees, immigrants, and Muslims," the letter read. "Jongen is devoted to providing intellectual legitimacy to the AfD's extreme rhetoric and actions. His philosophical jargon seeks to justify the incitement and violence carried out by Pegida, including the physical blockade of refugee buses, as the expression of a laudable thymos, or rage, that has been suppressed by liberalism and multiculturalism. During his talk at the Hannah Arendt Center, Jongen repeated the racist and xenophobic statements that make the AfD such a dangerous phenomenon in contemporary German politics."

Attempting to state his side, Jongen exposed during his talk that he was oppressed, and his free speech is limited in Europe where people show up to protest his talks.

"Since I joined the AfD ... I made the experience that conferences where I should appear were disturbed. There was a huge protest going on when I should give a talk in Switzerland," he said, adding, as do his American counterparts, that his opponents were really protesting free speech. He blamed it on the "spectre of Hitler" haunting Germany.

The controversy over his appearance at a university may cast Jongen under the shadow of Richard Spencer or Milo Yiannopoulos in the American mind. But instead of states of emergency and antifa and far-right battling in the streets, we now have the polite and archaic battle of academics that is almost reminiscent of the old Partisan Review. At Bard, there were no chants or signs or attempts to shut him down. And while the questions from the audience expressed a deep sense of dismay, it was all so quiet that you could snooze through it.

Roger Berkowitz, the founder and director of the Arendt Center, has since argued that it was essential to "include at least one person who represents the idea of an illiberal democracy," since "majorities of people in Hungary, Russia, Turkey, and Austria and ... large pluralities of people in France, Germany, and the United States (amongst other countries) ... embracing ideas of democratic nationalism and democratic authoritarianism" in an open letter of his own posted on Medium.

Still, it's as if at a conference 50 years ago, an organizer had invited a Nazi to add balance to Arendt's critique of totalitarianism.

"Her account of Adolf Eichmann sought to understand who Eichmann was and what it was that allowed him to actively participate in the killing of millions of Jews," Berkowitz continued. "For many of her readers, this effort to understand Eichmann was a betrayal. They thought he should be simply and categorically condemned as a monster."

But Berkowitz' Arendt analogy, which employs the same "both sides-ism" that Trump used after Charlottesville is way off. Inviting a speaker and giving him a platform is not a way of analyzing his ideas. (In his defense, Berkowitz cited Arendt wondering "how to write historically about something—totalitarianism—which I did not want to conserve, but on the contrary, felt engaged to destroy.")

Gessen's book, not Jongen's speech, is the answer. Her account of Dugin—or her 2012 portrait of Putin in The Man Without a Face—is a far more effective and Arendtian way to deal with noxious ideas and the people who espouse them. In The Future Is History, Gessen—who has since written about the slow-motion academic conference version of a protest in The New Yorker—places Dugin in his time, in the world of others, and pits his policies against those harmed by them. That is, perhaps, the true meaning of Arendt's "plurality of voices" that make up politics—not a false sense of giving all voices an equal weight.