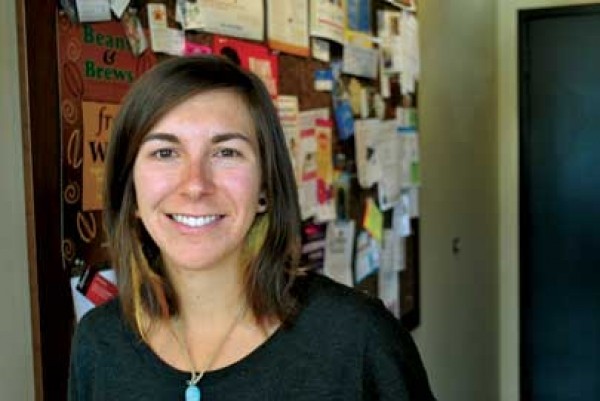 In mid-December, Kaitlin Elliott will be heading out on a three-month world tour that will take her to six countries. It’s mostly a work trip, but for up-and-coming snowboarder Elliott, it’s also a chance to play and explore her passion. The 27-year-old started competing at Snowbird in 2008, and last year worked her way through all the U.S. qualifying events to be the only woman from the U.S. to qualify for the Freeride World Tour (watch live on FreerideWorldTour.com). She’ll be competing alongside stars Shannan Yates, Laura Hadar and Laura Dewey—the four are the only women from the U.S. who will be taking part in the international competition, and they’re all from Utah. Elliott organized a fundraiser to help offset the cost of traveling to the competition, which will take place at The Canyon Inn (3700 Fort Union Blvd., Salt Lake City) on Dec. 5 at 9 p.m.

The first event starts Dec. 18 up in Rebelstoke. Then I’ll take off for Europe on the 17th of January. There’s the Chamonix co-ed comp in France. And then the week after that, there’ll be one in Austria, and then I’ll stay an extra week for a four-star event that’s just a qualifying event. I’ll come back the 20th of February, and then there’s another event in Kirkwood, Calif., that’s co-ed, and then the championships will be in Verbier, Switzerland, and that’ll be the 20th of March.

Is snowboarding a full-time job?
I’ve heard that most of the girls in Europe are professionals, whereas we’re just everyday people, trying to make a living, and snowboarding’s just a side thing—it’s our passion, but we don’t really make a lot of money doing it. I would really like the Freeride World Tour to blow up here. It’s really big in Europe, but not a lot of people have heard about it here in America. And I think it’s really cool for women to know that they don’t have to do slopestyle or half-pipe. If they want to try competing, freeriding is a great alternative. It’s fun, and not intimidating—everyone’s cheering at the top and cheering at the bottom, and you can just ride how you normally ride, or ride how you want to in your heart, and just have a good time. My favorite description of freeriding is: It’s a vertical free-verse poem on the mountain. It’s the ultimate expression of all that is fun and liberating about sliding on snow in wintertime. I don’t know who said it, but it’s so true.

How long have you been competing?
Since 2008. When I turned 18, right out of high school, I started working at Snowbird and wanted to do the ski-bum lifestyle. And in 2008, that was the first year that the Masters was starting up, and the first venue was going to be at Snowbird, and I thought I’d try it. I had done park competitions when I was younger—slope-style and half-pipe—and I did OK, but I didn’t love riding the park. When I heard about the North Face Masters, which was a freeride event, I was just getting started in jumping off cliffs and riding that kind of terrain, and I pretty much came in last in that event. But it was a really cool feeling, and I knew I could do better. The next event they had that year was in Alaska, so I went up there to try it, and I got sixth place, so I was stoked—that was a big step up for me. So the following year, I tried it again at Snowbird, and came in fifth place. Then I had some injuries that stopped me from doing the other events that year. In 2010, I ended up getting second place. I was really excited, and I started to do it more regularly after that.

What does a freeride competition entail?
There’s a start and there’s a finish, and you get to make up your own line down the mountain. There are elements: fluidity, control, style, line choices and crashes. But most of all, it’s an overall impression from the judges, so whatever they feel best represents freeriding and looks the most fun, gets the most points.

What do you like about competing?
There’s a camaraderie that comes along with these events—it’s competitive, but the girls, we’re all so loving to each other, and supportive, that it never really feels like a competition. It just feels like you’re going to shred with your friends, and you get to do this event that brings everybody together. It’s been a lot like a family.

How are you able to afford to compete—in time and money?
I’m a massage therapist. The past seasons, all of my spots have been really cool about letting me have the time off to do this. This is the first season that I’m actually going to be taking off and really concentrating on snowboarding. I pay for travel, but during the events, they pay for lodging, lift tickets, entrance fees. Which is a pretty big deal, because doing the qualifying events, you pay for everything—it’s a $150 entrance fee, and then however long you’re staying, it’s a couple hundred bucks to stay, and food, and travel ... it got to be quite an expense. I was spending $500 to $1,000 at every event I was going to. I was doing like three or four a year.

Do you have sponsors?
SmithOptics and DFP, which is an insole company. It’s hard. Let me tell you. This year is the first year that I feel like I’ve had something to offer companies, so I’ve been e-mailing everybody and trying to tell them what I can do for them.

What’s your long-term goal?
I want to stay on the Freeride World Tour and travel around and just get as much world experience as I can. I went up to Revelstoke, British Columbia, once for a comp, but other than that, I’ve never been out of the United States, and I want to ride as many mountains as I can.