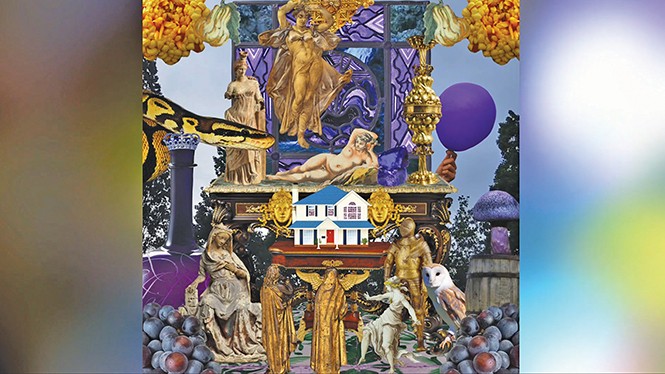 The world of a visual artist can be a solitary one—just you in a studio, bringing life to the ideas in your head. It was that reality, in part, that inspired artist Justin Watson to consider a variety of ways to get artists to think about being part of a larger society.

"Artists are looking for avenues of expression, and to connect with people," Watson says. "We're looking for opportunities to engage. I'm a computer artist using software, which is a completely isolated experience."

Watson—a Utah native, University of Utah graduate and current adjunct professor at the U. teaching video and sound—offered more than 30 artists what might seem superficially to be a very simple prompt: "Invent your own society." As part of that project, the artists would create some kind of physical artifact to represent that society, and those artifacts will be on display when the exhibition PERMADEATH opens Jan. 26 at the Utah Museum of Contemporary Art. "Even though it's a vague, seemingly juvenile question," Watson says, "it actually yields pretty interesting responses."

Indeed, those responses cover a broad spectrum of interpretations, inviting visitors into these newly-created societies. For one piece, an artist projected data streams onto silk, which will be hanging at the entrance of the exhibition—which means that those who enter will be entering that data stream. Chris Kelly, a professional set designer, has constructed an on-site set that's fully automated, mirroring his own everyday experience of creating worlds. Another participant had an ideal world she had drawn on paper when she was 5, and held on to, making a diorama of that world for this exhibition. There's even a world inspired by one artist's young son, who imagined "a world made out of foxes and raccoons."

While the opportunity to create an entire society might seem likely to generate political statements—whether idealized or dystopian worlds commenting on our own—Watson notes that the timeline for the creation of PERMADEATH dates back to late 2015, before, in Watson's words, "a lot of this nonsense that's going on now happened."

"There are these clusters of connected pieces ... some really obvious running themes," Watson says. "But a lot of it is not actually cynical. It was kind of nice, actually."

Watson's own role in the exhibition is unique, in that he doesn't consider himself exactly a "curator." In fact, he says he made it a requirement for himself that "if anyone asked to be in, I put it in." He adds with a laugh, however, "I know some of them are only doing it because they're getting a museum exhibit."

The concept of PERMADEATH is intended to continue past the dates of the UMOCA exhibition, though. The opening also marks the launch of what Watson hopes will be an online community in which artists can interact and connect, in a way that they haven't typically been able to do. "With this, it's actually an insular structure; you don't have to be bombarded by everything else that's going on constantly, everybody always updating their feed about politics," Watson says. "I wanted to make a sort of platform that artists can communicate with each other, talk about art, and keep it centralized around that topic."

While in some ways this creation is a response to—and against—more conventional social media platforms, Watson realizes that imagining his own version of an ideal virtual society for artists is bound to evolve in ways he hasn't foreseen, in the same way bots became a problem for Facebook and Twitter. "I have to own that. I understand that can happen," he says. "Honestly, I'm not looking to take over anything. It's a way to come together with like-minded people that would want to work a certain way, a micro-community making this little niche thing."

While Watson is establishing the initial architecture for this community, his vision is that the concept will be carried on by someone else, turning PERMADEATH into a kind of ongoing game where the role of the facilitator rotates to other participants. "The ideal scenario is, the next person comes up with a different set of rules," he says. "And I would like to participate, too. But you have to have someone directing the ship. You have to have someone stick their neck out and say, 'I'm collating it in this kind of way.'"

As with the democratized approach to gathering artists for the UMOCA exhibition, there's a sense with PERMADEATH of addressing the changing notion of how artists not only interact with each other, but present their work to the world. Physical artifacts might occupy the gallery space, but many of these works will continue to exist in a virtual way, along with the online artist community itself.