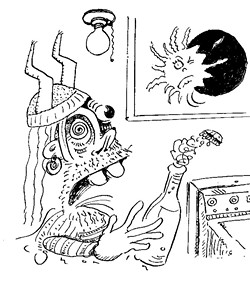 In Star Wars: The Force Awakens, the planet-killer device absorbs the sun to do its dirty work. This got me to wondering: If the sun suddenly went out, how long would it take us to freeze solid?

Notwithstanding the primary source you cite—i.e., some Disney focus group's idea of a movie plot—it strikes me that there are a few fundamental physical laws of the universe that just might work against the sun's being abruptly extinguished. But OK, I'll play along. What might conceivably produce such an effect here on Earth? The sun could be eaten by a black hole, I guess, in which case the temperature over in these parts is going to be the least of our worries. Some enormous foreign body could pass between us and the sun. Or, in what's probably the most realistic scenario, a passing high-mass object (black hole, rogue planet, etc.) could pull our planet away from the sun, sending us spinning into interstellar oblivion. (Serious sci-fi fans—not your Star Wars types, I mean the real geeks—may have come across this conceit in a 1950s short story by Fritz Leiber called "A Pail of Air.")

Anyway, let's say something like that just ... happened, and that we're not too worried about the various other problematic implications of such an event. We're mainly worried about staying warm. Let's start by compiling the sources of heat we currently enjoy, with calculations from the prolific scratchpad of my assistant Una:

Radioactive decay. Many elements on Earth—uranium, thorium, potassium, et al—decay continuously, with heat a principle byproduct of this process. Una estimated we can probably put the heat energy here in the neighborhood of 13 trillion watts.

Human-made heat. Currently worldwide energy production, including fossil fuels and nuclear (but not solar and wind—no sun, remember?), kicks in about 18 trillion watts.

Tidal energy from the moon. Heatwise, we don't get a whole lot of help from our little satellite sidekick: just 3.6 trillion watts.

So, about 60 trillion watts, give or take. Which may sound like plenty until we quantify the sun's contribution to our current heat budget: 114,600 trillion watts, or about 1,900 times what's generated here on Earth.

What happens when the lights go out? According to Una's calculations, the equilibrium temperature on the surface of the earth would, after the planet cooled fully, settle out at 43.6 degrees Kelvin, aka negative 381 degrees Fahrenheit, aka not exactly A Sunday on La Grande Jatte—cold enough that almost all our atmosphere would turn to liquid. (Hence "A Pail of Air.") And that's assuming the moon stays with us. The estimate drops one degree Fahrenheit without it.

How long would it take us to get there? Depends on a variety of factors: how the heat-transfer process changes as water vapor leaves the atmosphere, how quickly heat circulates in the oceans and up through the earth's crust, and so forth. In the best case, the average temperature drops to 32 degrees Fahrenheit in about 400 days, and to zero degrees Fahrenheit in 879 days. These averages, however, include the oceans, and the heat retained there will largely stay there, not doing us much good. If we focus instead on the 10 percent of the biosphere closest to us, we've only got about 38 days till the average temperature is 32 degrees Fahrenheit, and 83 days till it's down to zero. The carbon dioxide in the air turns to dry ice on day 236, and on day 503 the oxygen in the atmosphere liquefies.

Can humanity survive? Sure, at least for a while, but ideally we'd have a couple decades to prepare. The earth's crust is a great insulator, and we could build underground warrens that tap into buried fossil fuels for energy; we'll want to hook up some nuclear generators too. This gives us heat to warm ourselves by, electricity for charging our Kindles, and light for greenhouses. And of course there's that core and mantle heat, which obviously gets more intense the deeper we dig. At the bottom of South Africa's TauTona gold mine, for instance, nearly two and a half miles down, the air temperature is a balmy 130 degrees Fahrenheit—a good deal hotter than the recent record-setting (and lethal) heat wave in India, so at some point we may encounter the perverse-seeming situation of needing to rig up an air-conditioning system. One foresees a few other problems, too: a population of pasty depressives, living a dank subterranean existence with dim long-term prospects. Come to think of it, that sounds like the sort of society that sci-fi geeks living in their parents' basements will be perfectly optimized for. At which point, I suppose, the operating cinematic reference becomes Revenge of the Nerds.