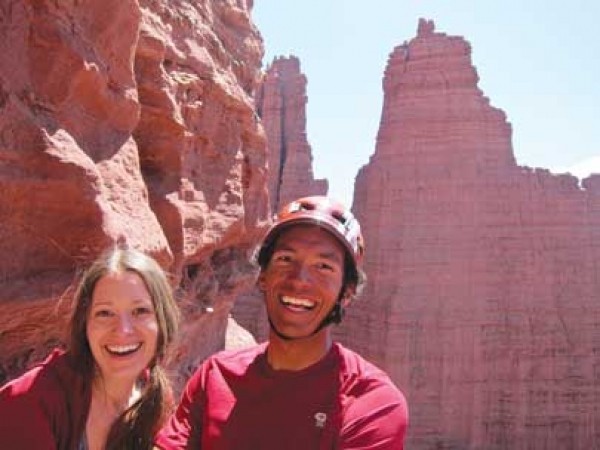 City Weekly writers often document the trials of individuals on society’s fringes. Some are victims. Some are perpetrators. Some are just trying to survive while coloring outside the heavy lines of a dominant culture—and I don’t mean only our local religious one. And a few subjects are sources of extraordinary inspiration.


Such heroic protagonists might be considered quite “vanilla” when it comes to most aspects of their lives, but, under dire circumstances, they somehow rise above adversity, teaching us all richer and fuller ways to live and love. Imagine my surprise when one such woman of steel turned out to be my youngest daughter, Amanda Catano.


Amanda’s life had unfolded mostly in the normal range, growing up with four siblings in three states, serving an LDS mission in the Philippines, graduating from BYU and being in no great hurry to get married—by Mormon standards, anyway. At 32, she was a fourth-grade teacher at Alianza Academy, a charter school in West Valley City. She enjoyed running, rock climbing and other outdoor activities. She took care of herself.


But in September, Amanda learned that the abdominal pain she’d been experiencing for months was not from having trained for and competed in a marathon. Tests revealed advanced colon cancer—something rare in a woman her age. A seven-hour surgery (it was originally scheduled for two) removed a foot of lower intestine, and an initially rosy prognosis became more complicated when tumors were also discovered in her hip and lungs. Her cancer was “upgraded” to Stage 4.


But here’s the remarkable part: Throughout her painful ordeal, Amanda has remained consistently upbeat and positive even though many in her situation would be thinking life had dealt them a crappy hand. Instead, Amanda jokes about her condition and a gradual loss of weight that has her down to 85 pounds. She remains a cheerful host to friends and family who visit her. I’ve yet to be at her bedside without needing to share the space with someone else getting cheered up by being there.


One evening, as more chemotherapy and radiation treatments were being scheduled, my phone rang, and Amanda’s boyfriend of a year and a half, Jason Dorais, a resident in emergency medicine at the University of Utah, quaintly asked permission to marry my daughter. I said that witnessing him at her side at every possible moment throughout her misadventure had already proven he’s a young man any father would be proud to have as a son-in-law.


Not long after, he texted that Amanda had accepted. They were essentially announcing to the world that they’re going ahead with life together no matter how long or short it might be.


The Deseret News and KSL 5 both covered their unusual engagement. National and international media outlets also found something moving in the story of this couple who, despite some inconveniently attached medical equipment, will marry on Dec. 21, a day that seems rife with significance.


Some people see this final recorded day on the Mayan calendar to portend the last day of existence for humans or possibly even the Earth before it gets smacked by some invisible planet or by an actually-known-to-occur gamma-ray burst from a far-off supernova. Some consider the ending of that ancient calendar to signal a new beginning for a more enlightened humanity freed from the smallness, selfishness and competitiveness that have all too often defined our species’ history.


But in the Northern Hemisphere, Dec. 21 is simply known as the winter solstice—the longest night of the year. By choosing it, Amanda and Jason are demonstrating that they’re willing to start their marriage at the darkest possible point and move forward from there.

Whatever the outcome of the standard medical procedures that have been used so far, as well as the alternative therapies they’re studying and beginning to employ to halt the disease and boost Amanda’s own physical resources to fight it, this couple is saying yes to life regardless of its duration or even its outward quality.

It’s been an additional inspiration to watch their friends and family rally to help defray the impact of her loss of income, the medical costs not covered by insurance and the expenses of a wedding. Contributions to an online fundraising site Amanda’s sisters set up have been generous.

As I’ve witnessed those who are moved by situations like my daughter’s, I’ve been heartened that, despite the mostly self-inflicted ills that continue to plague Homo sapiens who fight for turf on this round space rock, some kind of Christmas spirit really does exist. People usually are compassionate and consider themselves fortunate to be able to help others in difficult circumstances, and life can be good no matter how long or short or how easy or tough it turns out to be.