Plus: Ragin' Cajun Redneck Gators, The Heart She Holler 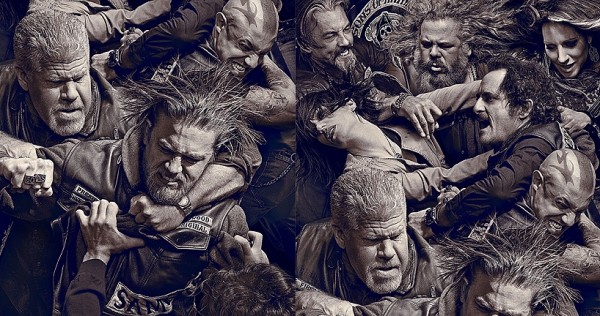 Season Premiere: Apparently, Tara (Maggie Siff) didn’t catch Orange Is the New Black before she was tossed in prison—the terrible haircut is optional. With his old lady in the joint, it’s up to Jax (Charlie Hunnam) to hold his motorcycle club together and take care of his two sons, the latter task mostly falling to the motley It Takes a Village crew of bikers and porn starlettes who makes up SAMCRO Daycare. Clay (Ron Perlman) is also behind bars, but probably not for long, as Season 6 big bad Lee Toric (Donal Logue at his most menacing) is ready to strike any deal it takes to destroy Jax and the club for their inadvertent role in his sister’s murder. The 90-minute season opener, “Straw,” is so loaded with violence and cable-testing imagery—some of the worst being inflicted on showrunner Kurt Sutter’s own recurring character, Otto—it seems like Sutter and FX are practically telling moral watchdog groups to suck it (and The Only TV Column That Matters™ approves this message). True TV and City Weekly are once again presenting Sons of Anarchy at Brewvies Cinema Pub (677 S. 200 West, 21+), free on the movie screen, Tuesdays at 8 p.m.—you’re going to need a drink with this season.

Movie: It’s the last Syfy B-flick of the summer—and this one doesn’t live up to the idiot-genius of Sharknado, either. As you’ve probably guessed, Ragin’ Cajun Redneck Gators is about killer swamp-chompers; what you can’t possibly surmise is how they got that way: “Contaminated moonshine dumped in a Louisiana swamp turns the bayou’s gators—and the people who eat them—into deadly mutants.” Yes, alligators are a delicacy in the South—do you think Syfy just makes this stuff up? The “Sy” stands for syience!

Boardwalk Empire
Sunday, Sept. 8 (HBO)
Season Premiere: Last year’s psycho villain Gyp Rosetti has been dispatched; one of this season’s potential antagonists is a far more subtle kind of weirdo: Federal Agent Warren Knox (Brian Geraghty, The Hurt Locker) isn’t just the newbie fed he appears to be, that’s all I’m sayin’. Meanwhile, Nucky (Steve Buscemi) cautiously gets back to Atlantic City business; Al Capone (Stephen Graham) expands his in Chicago; Nucky’s now-ex Margaret (Kelly Macdonald) is nowhere to be seen in the season premiere—meaning, there may not be a likeable character left on Boardwalk Empire. It really is the new Sopranos.

The Million Second Quiz
Monday, Sept. 9 (NBC)
Series Debut: NBC has a handful of promising, could-be-hit dramas and comedies coming this fall—so of course they’re kicking off their 2013-14 season with a game show. A game show hosted by Ryan Seacrest, no less, because the space-time continuum will collapse upon itself if this gelled hobbit is off television for even a moment.

The Heart, She Holler
Tuesday, Sept. 10 (Adult Swim)
Season Premiere: Between Ragin’ Cajun Redneck Gators and a second season of The Heart, She Holler, it’s an even worse week than usual for hillbillies on the TV lookie-box—or better, depending upon your social status. If only there were a mildly comedic way to tell if you might be a redneck. Anyway: When last we saw inbred man-child heir Hurlan (Patton Oswalt) and his jealous sisters two years ago, all was not well in the hick town of Heartshe Holler; somehow, things have degenerated even further since, as Heartshe has now become “the cosmic battleground of mankind’s final war between Pure Evil and Pure Awful!” TLC versus MTV? I’ve waited so long for this … [single tear].