Sandy's two-dog limit creates hard choices for a three-dog family, but it could be worse. 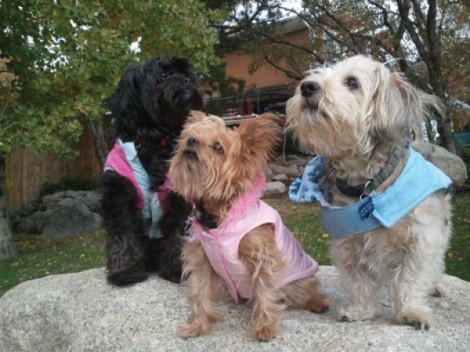 Moxie, Luna and Shayde collectively weigh about 40 pounds—even soaking wet with jackets on—and yet these little lap dogs are too much for a Sandy city ordinance that limits families to two pooches. The Shih-Tzu-dachshund mix, Yorkshire terrier, and Yorki-poodle mix are the only kids Todd and Holly Olsen have, and this summer they’ve wrestled with a number of options, none of them pleasant, that will allow them to keep their dogs.

“These are our kids,” says Todd Olsen, a photographer and ski instructor. “We pay our taxes, and we don’t have any [human] kids. … How can you dictate to me how many dogs I can have when you don’t limit children?”

They’ve been cited with violating the two-dog ordinance, and pleaded no contest on Nov. 8. They’re worried that many other dog owners are violating dog-limit ordinances without knowing it and hope to rally people around the idea of loosening the laws to allow more dogs for more people. “The ordinance is very black-and-white,” Todd Olsen complains. “It doesn’t take into account personal stories and circumstances.” Shayde came from a newspaper advertisement, but the other two were rescued from people who could no longer keep them themselves.

There’s hope, however, for the Olsens. In Sandy, unlike many cities across the valley, a “hobby license” may enable the Olsens to exceed the limit and keep their family together. They’re nervous, however, about their ability to comply with its requirements, such as building a large kennel on the property they rent.

The dispute began in May when Holly, who manages a salon, took the dogs for a walk at Sandy’s Hidden Valley Park at 11700 S. Wasatch Blvd. She let go of the dogs’ leashes to scoop a pile of poop at the same moment that a Sandy Animal Services officer appeared. Holly was cited with three counts of dogs running at large—for which the Olsens already paid $150—and for having one too many dogs.

Todd Olsen says they were unaware of the two-dog limit. They never had the dogs licensed—if they had, they would have been informed of the limit. “We’ve had the dogs for 12 or 13 years, or so. They’re little, indoor dogs. I completely never thought about licensing them.”

A two-dog limit is typical in counties, cities and towns along the Wasatch Front, says the Utah Humane Society’s investigator John Fox, but many people simply try to avoid getting caught. “This isn’t new. It’s been going on for 20 or 30 years … where people [with dogs in excess of the limit] are basically living in fear, hoping that no one will come after them.” But Fox agrees that there are owners, like the Olsens, who are unaware that they are breaking the law until they either get cited or try to license their third dog. Additionally, many people simply do not license their dogs, Fox says.

Fox generally supports limits on the number of animals in one home, but is also concerned about rigid limits that don’t take into consideration the dogs’ sizes or temperaments. Ironically, Fox points to cities like Sandy that have a hobby license, which allows more dogs under special circumstances.

Director of Sandy Animal Services Sharon Dennison says about 50 residents have the hobby license, which allows a household to have up to five dogs. Owners need only construct a dog kennel and pay $70 per year.

That doesn’t quite cut it for the Olsens. First, their house has doggy doors and the dogs spend very little time outside, so they want recognition that their home already accomplishes what a kennel with a shelter from the elements would. Second, the Olsens rent their home, so they’re hesitant to spend money building a kennel of at least 48 square feet (16 square feet for each dog) to comply with the ordinance. Bottom line: They want more flexibility in Sandy’s law, recognition that their tiny pooches aren’t annoying anyone and they want other dog owners to fight similar ordinances in their communities.

Dennison, however, is proud of Sandy’s ordinance, saying it’s one of the best around. “It’s not that hard to comply with [the hobby-license requirements] … but I think [requirements are] overwhelming when they first look at it.” Dennison says even mobile, nonpermanent kennels comply with the ordinance.

For now, the Olsens are going to try to build a kennel, but they complain that they have no use for it. All it will do, Holly Olsen says, is cut out some of the area in the yard where the dogs currently run.

Sandy's requirements for having three dogs