Don't miss the fish at this Ogden restaurant 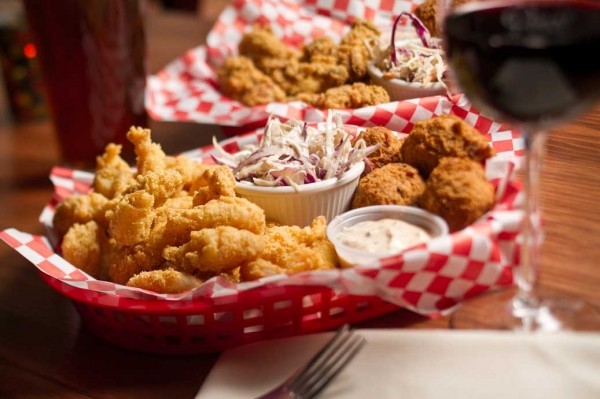 I had planned to review Ogden’s Soul & Bones BBQ back in summer 2009 but was thwarted. After a somewhat disappointing lunch at the original Soul & Bones location on 24th Street, I returned for a second try, only to find the place closed and workers carrying away restaurant fixtures. Given my less-than-stellar first impression, I wasn’t surprised the joint closed. But, Soul & Bones was just down, not out. The eatery reopened this year in a new, bigger and much better location on Washington Boulevard, complete with a full bar and good wine and beer selection.

I first became aware of Soul & Bones chef/owner “Big” John Dearmin back when he and his wife, Jennifer, were partners in the Crocodile Lounge, a short-lived Salt Lake City bar and restaurant that specialized in Cajun-Creole fare, and a place that I liked a lot. John went on to work in Park City restaurants and then toured U.S. festivals and fairs with Big John’s Cajun BBQ before opening the original Soul & Bones in 2009. With their lease having expired, John and Jennifer set out to find a new location for their restaurant, only to have Jennifer pass away unexpectedly in June 2011. It’s a sad story, but after the loss of his wife, John says he works hard to make Soul & Bones better and to keep the dream he shared with his wife alive.

And Soul & Bones 2.0 is better. It’s a big, roomy space with a long bar on the right, tables with tall chairs near the bar and regular dining tables farther back in the restaurant. There are terrific tunes playing constantly on the in-house sound system, as well as live music Thursday through Saturday, featuring the likes of Joe McQueen, Liz Woolley, Dan Weldon and many other excellent blues and jazz musicians. Unfortunately, the food too often plays second fiddle to Soul & Bones’ lives tunes and inviting ambiance.

The menu is mostly a mélange of Cajun-Creole-inspired fare and barbecue. There are classics like gumbo, etouffee, jambalaya, dirty rice and such, along with barbecued ribs, brisket, chicken and pulled pork. Deep-fried pickles ($5) and okra ($7) appetizers are pretty standard, although on my visits, some of the fried foods I encountered seem to be burned. Such was the case with my side of hushpuppies on one visit. They arrived late during my lunch: “The chef messed up the first batch,” I was told by a server. Well, the second batch was dark brown and bitter, either cooked at too high a temperature for too long, or cooked using oil that was overdue for changing.

Crawfish beignets ($8) weren’t “beignets” (New Orleans-style doughnuts) at all; they were nearly indistinguishable from the hushpuppies: orbs of deep-fried cornmeal with only miniscule morsels of crawfish nearly too small to identify. There couldn’t have been more than a single crawfish tail in all five “beignets” that made up our appetizer. Battered and deep-fried Beehive Cheddar cheese curds ($7) were a more satisfying appetizer option, served with a trio of sauces: standard remoulade, Creole sauce and a Creole mustard remoulade that I couldn’t get enough of.

Cajun-Creole items like jambalaya ($16) and crawfish Creole are only vaguely reminiscent of anything I’ve ever eaten in Louisiana, lacking a depth of flavor and balance of spices. Much better, however, is the crawfish etouffee ($15), which might not reach the ethereal heights of Paul Prudhomme’s, but ain’t bad, especially when washed down by a bottled microbrew, like Deschutes Inversion IPA ($6). Likewise, the po’boy sandwiches miss the mark just a little, too. I like the po’boy fillings such as blackened chicken ($8), fried oyster ($9), fried shrimp ($9) and especially the fried catfish ($8). What I don’t like is that the sandwiches come buried in coleslaw. Every po’boy I ever had in New Orleans was simply dressed with shredded lettuce, which I prefer, even though Soul & Bones does make really good coleslaw; I just don’t want it on my po’boy. Of course, the situation is easily remedied by simply requesting the coleslaw on the side. Unfortunately, the house fries that come with the po’boys are a soggy, limp disaster.

The barbecue at Soul & Bones? The brisket is the best option—very tender and flavorful, with just the right amount of smoke. The barbecued chicken, too, is good. The problem with Soul & Bones’ barbecue isn’t the meat; it’s that the meats—ribs, chicken, brisket and pulled pork—come slathered in a tangy tomato-based sauce that reminds me more of ketchup than anything I’d really want on my meat. It’s a pity that Soul & Bones doesn’t offer a variety of barbecue sauce on the side, that customers could apply themselves. I’d love to see a North Carolina-style vinegar sauce, for example, to douse the tender pulled pork with.

Actually, Chef Dearmin’s forte seems to be fish. The best dishes at Soul & Bones, in my opinion, tend to be his pan-fried fish selections. There’s usually a daily fish special, and I like the fact that the fish isn’t usually run-of-the-mill halibut, cod, mahi mahi, tilapia and such. Recently, we enjoyed an excellent, although overpriced ($24), fish special for lunch: pan-fried hake on a bed of creamed spinach and cumin-spiced black beans, with a stupendous blood-orange Creole sauce. Dearmin also often features fish such as speckled trout, Louisiana black drum, amberjack, wahoo, sheepshead (a type of fish) and so on. Despite its name, fish is really Soul & Bones’ sweet spot.