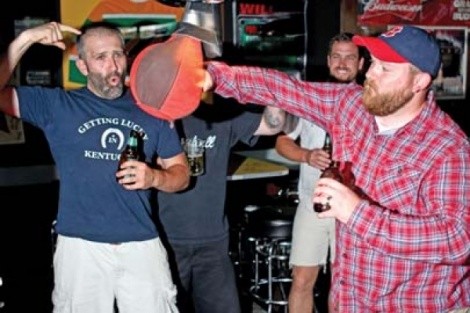 South of Downtown
The concept of “downtown Salt Lake City” is a little hazy, depending on your perspective. If you’re in Ogden or Sandy, these joints might be considered part of downtown. But for us downtown dwellers, they fall somewhere between downtown and Sugar House. We’ll call it SoDo for now.

35.1 Chuckles Lounge
A quiet spot for bellying up to the bar is sometimes exactly what the doctor ordered; there’s a low-key, sing-us-a-song-you’re-the-piano-man vibe to this neighborhood watering hole. Bend an elbow with the regulars, or mix it up with electronic darts, video games or a game of pool. 221 W. 900 South, Salt Lake City, 801-532-1721

36.8 Manny’s Too
There’s something special about the kind of watering hole where the bartender calls you “sweetie” when you order. That’s the everyone’s-a-pal feel at this low-key bar, where you get to the no-nonsense outdoor smoking patio by passing an actual pinball machine. Enjoy that drink at a leisurely pace over a game of pool, and come back again, sweetie. 1704 S. Main, Salt Lake City, 801-467-6289

37.2 Mixed Emotions
For 30 years, Mixed Emotions has served cold beer and mixed drinks to its patrons who come to the spacious bar to play pool, throw darts or just hang out. A wide variety of beer is offered, and while the club doesn’t offer a full menu, customers who need a bite to eat can chow down on a 12-inch or 7-inch pizza. Club Mixed Emotions also hosts live hip-hop shows once a week, a pool tournament on Sundays and a bigger show with a live band once a month. 1030 S. State, Salt Lake City, 801-355-8055

37.2 Duffy’s Tavern
Duffy’s Tavern is a neighborhood sports bar with pool tables, darts and numerous TVs perfect for watching any sporting event. In addition to cold beer, Duffy’s offers a full menu, and the bar also wants you to know it serves up a mouth-watering selection of sandwiches, including a cheesesteak that could be “put up against anyone’s in the city.” There are comfy booths, a jukebox to play your favorite music and free pool on Sundays. 932 S. Main, Salt Lake City, 801-355-6401, SaltLakeCityUtah.org/DuffysTavern.htm

35.0 Willie’s Lounge
It dubs itself “the finest dive bar in Salt Lake City”—which is as forthright as it is generally accurate. The blue-collar clientele can kick back on vinyl couches between games during foosball and pool tournaments, enjoying the “four for $6” draft beers. Or, test your manliness on the electronic punching bag. 1716 S. Main, Salt Lake City, 866-612-2920, WilliesLounge.net

38.2 The Republican
Voted Best True Irish Bar by City Weekly in 2007, The Republican invites patrons into a relaxed atmosphere and boasts that it is a favorite of Salt Lake Real fans. Pull up a stool and enjoy a drink at the huge 70-foot bar, or play a game of shuffleboard, pool or darts. If you’re smart, try strainin’ your cranium in the pub quiz on Monday nights. 917 S. State, 801-595-1916

38.5 The Spot
The car-suspension-threatening access to the parking area might not suggest that The Spot is also the kind of place that serves chilled wines and a wide variety of specialty bottled beers, including a $12 Anderson Valley Brewing Abbey Style Ale. You could feel just as comfortable gathering with the office pals after work or spending a weekend shooting pool or playing foosball. 870 S. Main, Salt Lake City, 801-355-7768, SaltLakeCityUtah.org/TheSpot.htm

39.9 Lucky 13
While the boys of summer play across the street at Spring Mobile Ballpark, the boys and girls of all seasons play here. It’s a sports-bar atmosphere without the inevitable sports-bar cacophony, including a comfy outdoor patio to listen to the sounds of the national pastime. If you’re feeling like a competition with your own stomach, try the foot-tall Big Benny Burger: 28 ounces of beef piled high with bacon and ham. 135 W. 1300 South, Salt Lake City, 801-487-4418, Lucky13SLC.com

41.2 Piper Down
The “olde world pub” designation it gives itself is well-deserved because Piper Down is not just a place to get a drink—it’s more of a community gathering place. Grab a bite when participating in the Geeks Who Drink pub quiz, get onstage for the multiple-Best-of-Utah-winning karaoke or test your poker skills at the regular Texas Hold ‘Em tournaments. And even if you just feel like being a spectator, you can still be among friends. 1492 S. State, Salt Lake City, 801-468-1492, PiperDownPub.com

41.5 The Bayou
It might be a bit of a wait to be seated on some nights, but that’s because Best of Utah winner The Bayou has one of the largest selections of beers in the region and is especially proud to feature a large selection of local beers. You can sip on one (or a few) of your favorite beers while waiting for your plate of etouffee, jambalaya or popcorn crawfish to arrive, shoot a couple games of pool and listen to a live, soulful jazz band tear it up. 645 S. State, Salt Lake City, 801-961-8400, UtahBayou.com

43.2 Uncle Bart’s
Uncle Bart’s might not be a large bar, but it has a faithful group of regulars who come for the casual atmosphere and cold beer. Almost every night of the week, Uncle Bart’s offers entertainment for its patrons. You can stamp your bingo card with a dauber Monday nights, wow the crowd (or maybe just embarrass yourself) with your vocal skills Tuesdays and Thursdays, listen to a live band Friday and Saturday nights or rock out during a Sunday-night jam session. 837 S. Main, Salt Lake City, 801-532-9068

44.9 Bar Deluxe
More of a venue for concerts and events than your typical let’s-go-grab-a-drink bar, Bar Deluxe still hosts a relaxed vibe and a dedicated crowd of locals. With live music several nights per week, a DJ on Tuesdays and occasional burlesque and belly-dance showcases, anyone interested in the local scene will probably find themselves at Bar Deluxe at some point. This individual will then be rewarded with an intimate stage, a full liquor selection and awesome staff—and cheap beer, to boot! 666 S. State, Salt Lake City, 801-532-2914, BarDeluxeSLC.com

45.9 The Woodshed
What can you discern about the personality of a place decorated with album covers—that’s right, vinyl album covers—from (among others) Night Ranger and Bob Seger? It’s an earthy, throwback sensibility, to be sure, perfectly suited for the live music Thursdays through Saturdays or the Tuesday and Sunday karaoke. Take your beverage—plentiful bottled beer varieties are on hand—to the economy-size patio, and rock in America. 60 E. 800 South, Salt Lake City, 801-364-0805, TheWoodshedSLC.com