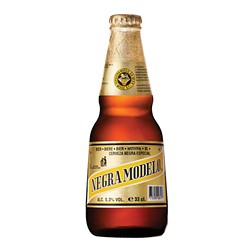 Visit any of the Mexican eateries recommended in this week's Dine column (p. 25), and you'll be able to order up a Mexican beer to enjoy with your meal. Now, if you've only quaffed one beer brewed in Mexico, my money says it was probably a Corona. Corona, a light straw-colored lager, was created in 1925 to commemorate the 10th anniversary of Mexico City-based brewery Cervecería Modelo (now called Grupo Modelo). Since then, it has become the best-selling non-U.S.-brewed beer both here and in the United Kingdom, and the fifth most popular beer worldwide, selling in more than 150 countries.

Among beer snobs, Corona does get a bad rap. True, it is the Budweiser of Mexico. But on a hot, humid day at the beach in Puerto Escondido or Cabo, there's nothing more refreshing. And if Corona is Mexico's Budweiser, then Sol is its Pabst Blue Ribbon. Like Corona, it's great on a hot day with a wedge of lime.

In my Mexican travels, I've noticed that the natives consume much more Tecate than Corona. To me, Tecate tastes a bit too thin and a bit too sweet. But its popularity can be accounted for, in part, I think, because it comes in cans, requiring no bottle deposit, which tends to be hefty in Mexico. Don't spare the lime when drinking Tecate; it benefits greatly from a splash of citrus. Other light lagers to sip alongside fish tacos or spicy salsas are fresh-tasting, zesty beers like Sol, Pacifico or Chihuahua.

Mexico's modern beer industry began to develop as a result of an influx of German immigrants during the later 1800s, and from then through today, German brewing styles have greatly influenced Mexican beer-making. Thanks in large part to the German influx, there were 36 different breweries in Mexico by 1918, before the consolidation of the industry took hold. Today, 90 percent of Mexico's beer market is controlled by two corporations: the aforementioned Grupo Modelo, and FEMSA (Fomento Económico Mexicano, S.A.B. de C.V.).

The German influence on Mexican brewing can be credited for one of my favorite Mexican beers: Bohemia. It's a German-style light lager that is aged longer than most Mexican beers. Bohemia has fragrant floral aromas and a somewhat nutty malt flavor. I especially like it with meat dishes such as bistec a la Mexicana and pork carnitas. Another good candidate for meat dishes, although a bit thinner, is Dos Equis XX Special Lager. However, easier to locate is the more popular Dos Equis Amber, which is a bit malty and reminiscent of a Viennese lager.

If you can find it, also try Noche Buena, a seasonal (Christmas) beer from Mexico's Cervecería Cuauhtémoc Moctezuma in Nuevo Leon. It's a fuller-bodied lager—not at all unlike a Munich Bock beer—that pairs nicely with grilled meats. The same brewery also makes a unique beer called Casta Morena—a fruity, dark ale with notes of plum, a Mexican beer made in the style of Scottish Ale.

In my opinion, though, the most interesting and flavorful beer widely produced in Mexico is Negra Modelo, from the Grupo Modelo brewery that also makes Corona. The two beers couldn't be more different. Negra Modelo is a complex beer (akin to a German-style Altbier), creamy and somewhat sweet with hints of chocolate. That subtle chocolate flavor makes it a slam dunk to drink with rich Oaxacan mole dishes, as well as with beef, lamb and pork dishes. A bit on the dark and stormy side, it's also a good Mexican beer to enjoy after dinner.