GLOW glorifies the ladies of '80s wrestling; Preacher is back and ballistic. 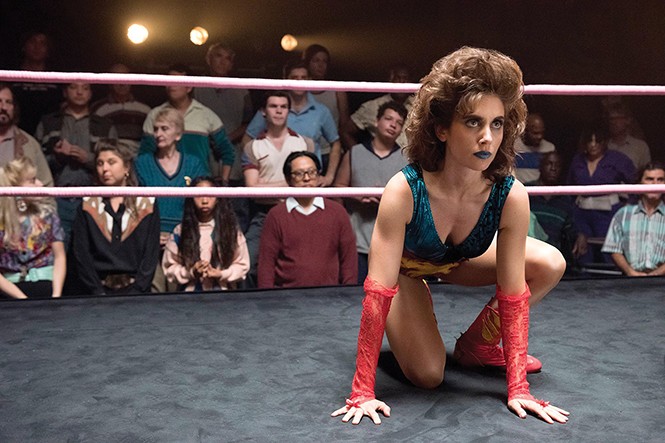 If you think adapting Stephen King's The Mist (series debut, Thursday, June 22, Spike) is a bad idea, consider this: ABC is launching a reboot of The Gong Show and a boy-band reality-competition show tonight to compete with the summer filler stinking up Fox and NBC—there's nothin' else on. King's Under the Dome, which was the same story of a small town isolated by a supernatural event, ran for three whole seasons on CBS, one of which didn't suck; The Mist doesn't have the luxury of known actors, just a crew of nobodies with zero lead-in assist from Lip Sync Battle, the only thing anyone ever watches on Spike besides Bar Rescue and off-brand MMA. But, as I said, there's nothin' else on.

Alison Brie has had memorable supporting roles on Community and Mad, but GLOW (series debut, Friday, June 23, Netflix) is her show, all the way. In GLOW, she plays Ruth Wilder, an unemployed actress in '80s Los Angeles who's desperate enough to try anything that isn't porn—even a low-budget/high-cheese all-female pro-wrestling TV show being launched by a failed film producer (Marc Maron), Gorgeous Ladies of Wrestling (which was a real thing). Like a lighter Orange Is the New Black (Jenji Kohan is a producer here, and wrote one episode), GLOW is a tale of very different women bonding in a "man's" world that does surprisingly emotional heavy lifting when it needs to. All this, and some of the worst '80s fashions ev-er. Wooo!

The last of Playing House (Season 3 premiere, Friday, June 23, USA)? Jessica St. Clair and Lennon Parham's cozy comedy about almost-uncomfortably close girlfriends and a new baby has barely survived to see a third season on USA, a cable net that's concentrating more on gritty hour-long dramas after failing to launch a string of smart half-hour comedies. Since USA is blowing out new episodes back-to-back on Friday nights, it's obvious they're done with the show because it doesn't appeal to the Chrisley Knows Best idiocracy. This could be your last chance to see a genuinely funny and sweet comedy that deserves a shot somewhere else. TV Land? Hulu? Netflix? Ugh ... Crackle? Step up.

Like Into the Badlands, Preacher (Season 2 premiere, Sunday, June 25, AMC) is an American Movie Classics ('member those cable days?) gem that just doesn't get the buzz it deserves—the same could be said of Halt and Catch Fire and Humans, but they're pretty much goners at this point. Preacher, on the other hand, is poised to blow up—in every sense—in its expanded second season, a wild ride that sees preacher Jesse (Dominic Cooper), badass Tulip (Ruth Negga) and vampire Cassidy (Joseph Gilgun) hitting the highway in search of an absentee God, as ordained in the original Vertigo comic, only to find more trouble/violence/black comedy in New Orleans. Preacher: It's hell-arious (quote me, AMC).

Why networks continue to produce reality shows wherein horny fuckwits are herded together in front of cameras 24/7 and fed gallons of alcohol is beyond me—did we learn nothing from Rape Island—I mean, Bachelor in Paradise? Anyway: Summer staple Big Brother (Season 19 premiere, Wednesday, June 28, CBS) introduces a new gaggle of vile stereotypes for your viewing ... pleasure? ... and tacks on the subtitle Over the Top because, who knows/cares? I also didn't understand why a seemingly classy lady like Julie Chen continues to host this Axe-soaked cockfight year after year, but then remembered that she's a former homewrecker mistress now married to the president of CBS. Makes total sense.

When it debuted in 2015, Younger (Season 4 premiere, Wednesday, June 28, TV Land) didn't seem like a series with legs—unless you count star Sutton Foster's, a fantastic set of stems that, as they say, go all the way to the ground. Forty-something Liza (Foster) posing as a 20-something to land a job in the cutthroat millennial world of book publishing was a cute idea, but how long could she keep the secret? Three seasons, apparently; she finally revealed the truth to her co-worker BFF Kelsey (Hilary Duff), causing a shitstorm that will allow Younger to lean more heavily than ever on the drama side of dramedy. Meanwhile, I still want a spinoff series about power hipster Lauren (Molly Bernard).