Spell Talk wants you to forget The Naked Eyes

CWMA Band of the Year changes its name. 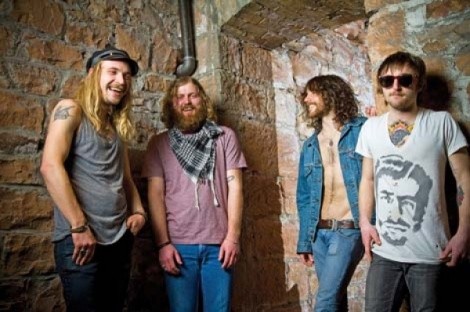 For any band still trying to establish itself, the occasional name change isn’t all that uncommon. But you can imagine what a pain it is for the group and its audience when a band becomes established and has to make that change.

Such is the case with the Salt Lake City psychedelic-rock foursome now known as Spell Talk.

When they formed just a few years ago, the band took on the moniker of The Naked Eyes, playing frequently around the city and using it for their popular debut album, Free & Easy. The band gained a strong following and exposure, and won our own CWMA competition in 2010.

But all the success and notoriety brought about a forced decision that’s now put them in the position of having to remind people who they are. That’s because the name Naked Eyes was already owned by an ’80s-era British synth-pop group famous for its one major hit, “Always Something There To Remind Me.”

“The new name came about when the band contacted us and told us they didn’t want people to get confused,” says Spell Talk bassist Jared Phelps. “And if people were getting confused, then they could take some sort of legal action.”

Now facing the task of getting the word out about the new name, the group went so far as issuing reprints of their last EP, turning it into a “new” self-titled Spell Talk release. The band also started cranking out a new set of material and planned ways to get the new name into the public eye, starting with an entirely new release, which they started working on this spring. But, knowing the lengthy production schedule and their own hard-to-please tastes, they felt a new release wouldn’t come out as fast as they’d like, so the group decided to go with a different type of album—a live one.

Spell Talk recorded the set in March, and the band made a conscious effort to make sure the set didn’t come off like just any live album. They carefully chose what instruments they’d be using, and included several new songs on the show.

“We toned everything down, featuring simple percussion, acoustic guitar, slide guitar, organ and harmonica,” says guitarist Andrew Milne. “There was a real positive vibe in the air.”

The album, Ghost Rider, was mixed and mastered from the original by Justin Langford (The Plastic Furs) and is a perfect sampling of things to come from the group.

Kicking off with “High Water,” you can hear the band’s enthusiasm gush from the speakers. It’s apparent all four members took the time to rehearse and nail every song down so that the recording sounded as good as possible. Songs like “Under Thoughts” and “Tennessee II” show the band’s ability to capture a slower pace, bringing out the rusty, winding tones from the slide guitar, while “Dirt Row” and “Causey” bring out their vitalizing rhythms and free-willed vocals that prompt you to jump up and dance.

As the members keep heading out of town for on-and-off touring—not to mention finishing a new full-length due out later this year—they have a refreshing outlook on the local scene. “We just got back from the South, and one thing I have noticed is SLC has a really great scene and it’s a honor to be a part of it. We see really amazing things happening here.”