It's Alive: Splice is a mashed-up hybrid in itself. 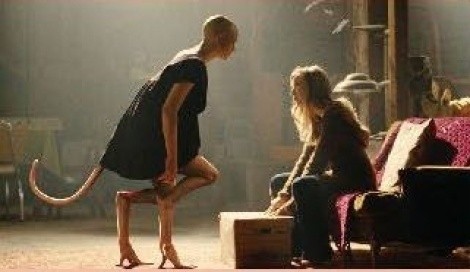 I’ll give this to co-writer/director Vincenzo Natali (Cube): His mad-scientist yarn Splice definitely isn’t a conventional “monster movie” in the sense that you might expect from the trailers and commercials. Which is fine—except that I’m not sure it’s quite successful enough at what it is to pick up the slack.

In a privately funded lab, genetic researchers Clive (Adrien Brody) and Elsa (Sarah Polley)—a professional and personal couple—are attempting to create unique life forms in an effort to synthesize new compounds for potential pharmaceutical use. But at a showcase for stockholders, one of their creations goes spectacularly wrong, leading to the possibility that their research could be shut down. Then Elsa decides to add human DNA to the mix, and before you can cry “It’s alive!” … it’s alive.

The “it” in question—which the scientists dub Dren (Delphine Chanéac)—is a nifty-cool creation, something that continually evolves until it resembles a cross between an Area 51 alien, a hot chick and a kangaroo with a poisonous spike at the end of its tail. Splice bypasses scares or gross-outs—you may be surprised by how much time passes before a human life is threatened, let alone taken—opting instead for a funky melding of medical ethics and dysfunctional-family dynamics as Elsa finds her maternal instincts kicking in for her relationship with Dren.

Eventually, a genre exercise does emerge from all the hand-wringing, complete with plot twists that are as heavily foreshadowed as they are giddily envelope-pushing. And while Splice is entertaining enough when it leaps for the truly absurd, its attempts at emotional content never really connect despite the admirably straight-faced performances. The movie itself turns out to be a spliced-together hybrid as well, with no single element dominant enough to let you get a handle on what it is.