How to make the ski/snowboard combo 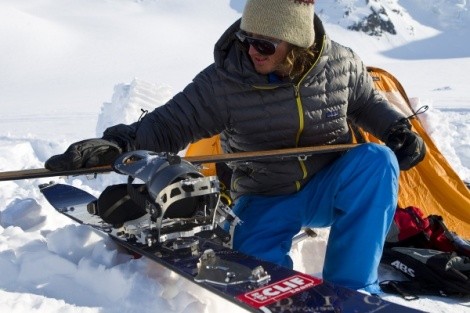 You hike up the mountain on skis; you ride back down on a snowboard. It’s a splitboard—and its popularity is exploding.

And it’s easy to see why: A splitboard finally opens up the backcountry to snowboarders. No rider could ever hop all the way to the top of a peak. Worse, walking in unpacked snow usually means sinking to the knees, making each step hard labor. With a splitboard, snowboarders don’t even need to buy a lift ticket. They can freely climb to the top of a favorite resort trail, if they have the stamina.

A splitboard is exactly what it sounds like. It has a fastening hook at the tip and tail, with another set of hooks along the board. The bindings attach with pins and can easily be changed to a ski touring or snowboard position. They’re expensive to buy—about $1,000 for versions made by gear luminaries such as Atomic, Burton, K2 and Voile. But DIY options bring the cost down by several hundred dollars for those who cut their own snowboards and use one of the kits that contain all the parts except bindings and skins. For those who buy a dozen or so lift tickets a season, a splitboard will pay for itself.

For Utah’s internationally famous splitboarder, Forrest Shearer of Cottonwood Heights, it’s not about accessing untouched powder or saving money; it’s about the environment. He feels people should green it up on snow by getting to slopes under their own power, not by riding a lift. His splitboard allows him to enjoy Alta’s exceptional terrain, where snowboarders aren’t permitted on the lifts. Shearer climbs up the trails on skis, then carves down on his board.

“This is a growing sport,” Shearer says. “It’s similar to cross-country and telemark skiing. You do need skins to climb up hills, but you can buy splitboard-specific skins. When I first started the sport, I made my own splitboards, but now, I buy them. You can buy them at any kind of backcountry ski and snowboarding place like Backcountry.com, REI or Wasatch Touring.”

The 32-year-old, a former surfer who has long called Utah home, adds, “Splitboarding has opened a new life for me as a pro snowboarder. It’s such a cool way to enjoy the outdoors and see the mountains in a pristine setting. It’s a way to learn so much more about the environment.” He belongs to numerous environmental groups, including Protect Our Winters, and in 2010 he made the incredible film Deeper.

Shearer warns that for backcountry, splitboarders need avalanche gear because wilderness terrain isn’t monitored by ski patrol and doesn’t have avalanche control. Before setting out, learn the latest dangers by calling the Utah Avalanche Center. Get recorded information for the entire state at 888-999-4019, or contact the main office at 801-365-5522 or 801-524-5304. In addition, for those buying or making a splitboard for the backcountry, go for a larger size than you regularly ride, because you will encounter deeper, unpacked, fluffier snow.

To make your own splitboard, you’ll need a circular saw, a drill to install the bindings, plus a marker pen, tape measure, masking tape, edge file and polyurethane to seal the inner edge. Shearer says, “You can have edges put on by a ski or snowboard shop. A lot of shops in town are willing to do it for you, and it doesn’t cost that much.”

One of the few places in the Salt Lake Valley area to rent splitboards is Salty Peaks (3055 E. 3300 South, 801-467-8000, SaltyPeaks.com). Although daily rental is just $40, you’ll need a credit card for a $1,000 refundable deposit, if the splitboard is returned undamaged. Salty Peaks also sells bindings and skins for do-it-yourselfers, or they will turn your own board into a splitboard and sell the bindings and skins for $855. That’s a decent price, considering that climbing skins alone cost about $170, and bindings are in the $300 to $350 range. The work is guaranteed.

If you want to be part of the biggest trend on snow, forget about new clothing. Just split your snowboard into skis.