Salt Lake City is becoming increasingly urbane in many aspects, and local sports fans are enjoying the benefits as much as foodies or fashionistas. From major-league sports to top-tier college athletics to minor-league teams, the Salt Lake Valley has it all. And close to any game, you’ll find great places to party before or after. Here’s a handy guide.


EnergySolutions Arena is home to two professional sports teams in the NBA’s Utah Jazz and arena football team the Utah Blaze, but you won’t find a lot of crossover fans. Jazz games are notoriously pricey in the lower bowl, and popular with the state’s society types. Arena football? A cheap ticket and far more populist in spirit. Both fan bases benefit from the free TRAX zone in downtown SLC, making most downtown bars and restaurants just minutes away from the arena. On the Main Street stretch of TRAX, pre-game drinks await at dives like Junior’s Tavern (30 E. 300 South, 801-322-0318, JuniorsTavern.com), Cheers to You (315 S. Main, 801-575-6400, CheersToYouSLC.com) and Murphy’s (160 S. Main, 801-359-7271, MurphysBarAndGrillUT.com), while post-game grub is available at small-plates specialists Eva (317 S. Main, 801-359-8447, EvaSLC.com) and underground sushi spot Ahh Sushi, attached to yet another dive, O’Shucks (22 E. 100 South, 596-8600).

Baseball is a love-it-or-hate-it sport, but even the utterly indifferent can appreciate the value of hanging out in the sun with friends and drinking cheap beer in the summertime at one of the most scenic ballparks imaginable. They can also appreciate the proximity of the minor league Salt Lake Bees’ ballpark to a fine array of bars heavy on the dive vibe. You’re easily within stumbling distance of Willie’s Lounge (1716 S. Main, 760-828-7351, WilliesLounge.net) and its pleasingly cheap drinks, or Duffy’s Tavern (932 S. Main, 801-355-6401, DuffysTavernSLC.com) and its surprisingly tasty pizza. You also have some nearby food establishments that will easily convince you to skip the stadium hot dogs. Lucky 13 (135 W. 1300 South, 801-487-4418, Lucky13SLC.com) offers what some believe are the best burgers in town. Be forewarned: The Lucky 13 patio is so comfy in the summer, you might not bother giving up your spot to hit the game across the street. Piper Down (1492 S. State, 801-468-1492, PiperDownPub.com) has a wide array of bar-grub options right around the corner on State Street. And if you really want to class up your day at the ballgame, stroll down to Meditrina (1394 S. West Temple, 801-485-2055, MeditrinaSLC.com) for small plates and some house sangria. 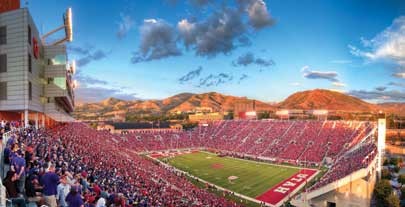