Is there gold in the sky? 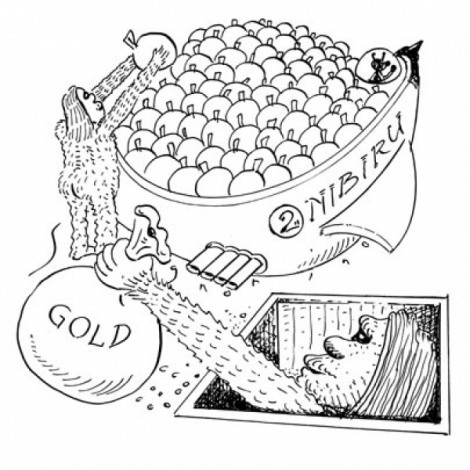 On the History Channel’s Ancient Aliens series, they said aliens came to Earth to mine gold in order to protect their atmosphere. On radio’s Coast to Coast AM, they said our government is shooting gold into the atmosphere to protect us from gamma rays. How do they get the gold to stay up in the sky and not fall back down to Earth? —Jean Brown, Savannah, Georgia

Please watch the movie What in the World Are They Spraying? and try to prove it wrong. The claim: Aluminum oxide is being sprayed into the air to deflect the sun’s energy and help prevent global warming. The aluminum falls to Earth and seriously alters everything. Is this true? —Kevin Brown, Logan, Ohio

The price of gold, last time I checked, was over $1,600 an ounce. So I respectfully suggest a more practical method of protection from gamma rays would be the traditional tinfoil hat. On the larger question of the government (or somebody) spraying things into the atmosphere, whether for good or for ill, the usual reaction is to dismiss such claims as drivel from the black-helicopter crowd, which I acknowledge for the most part they are. However, it’s drivel with some basis in fact.

Here are the stories, from farthest to nearest fetched:

1. The source of the wacky yarns on Ancient Aliens is the late Zecharia Sitchin, an amateur archeologist and popular author. Sitchin claimed to have interpreted ancient Sumerian tablets telling of even more ancient astronauts from the planet Nibiru, just outside the orbit of Neptune, who arrived on Earth nearly half a million years ago and created the first humans via genetic engineering as the workforce for their terrestrial gold-mining operation. Why did the Nibiruans need gold? It seems their planet has an extremely elliptical orbit, orbiting the sun once every 3,600 years and periodically looping out to the most distant reaches of the solar system. During their long journey away from the sun, Nibiruans rely on geothermal heat to keep their butts from freezing. To conserve warmth, they inject gold particles into their atmosphere to create a greenhouse effect. This tells us that the notion of fooling with the atmosphere to control the climate goes back a long way—maybe not 500,000 years, but, judging from the publication date of Sitchin’s first book, at least to 1976.

2. Psychic medium Christian von Lahr says gamma rays will bombard Earth on Dec. 21, 2012 because 2012 marks the “midpoint” of human existence, and ancient texts tell us that “when we reach this point, it means that all the major lessons that were necessary for man to serve his purpose will have been learned.” (I get this from the Coast to Coast AM Website.) Von Lahr recommends we shoot gold into the atmosphere to protect against the gamma rays—as far as I can tell he doesn’t think the government is already doing this. Why gold? Presumably if it worked for the Nibiruans, it’ll work for us.

3. What in the World Are They Spraying? is a 98-minute documentary produced by Michael J. Murphy. The gist is that jet contrails are evidence of a secret government project to combat global warming by spraying the atmosphere with aluminum oxide to reflect the sun’s rays back into space. The stuff then drifts down and messes with life here on Earth. Skeptics have criticized Murphy’s evidence on technical grounds having to do with the significance of aluminum levels in water samples and such, but to broadly summarize, they think he’s nuts.

Maybe he is. However, another way of looking at it is that he’s just premature. Fact is, scientists have been talking for years about shooting aluminum oxide or other substances into the atmosphere to counteract global warming. For example:

4. A research team led by the physicist Edward Teller, better known as the father of the hydrogen bomb, proposed various methods for controlling solar radiation in a 1997 paper. One of them was launching aluminum oxide into the atmosphere.

5. Other scientists, as reported in this column, have proposed artificial volcanoes that would spew sulfur compounds into the air, blocking sunlight and leading to global cooling, as occurred following the eruption of Mount Pinatubo in the Philippines in 1991. Researchers in the U.K. are about to test a system that one day could use hoses hoisted by balloons to spray particulates into the stratosphere to mimic volcanic cooling.

6. There really is evidence that jet contrails have an impact on climate, although not a deliberate one. As also previously noted here, a study found temperatures were noticeably higher when U.S. aircraft were grounded following 9/11 than immediately before and after.

You’re saying: Don’t encourage these people. I have to ask: Which people are we talking about? The chemtrail conspiracy buffs, or the scientists who propose, apparently seriously, that having screwed up the planet by spewing crap into the atmosphere, we can fix things by sending up still more?