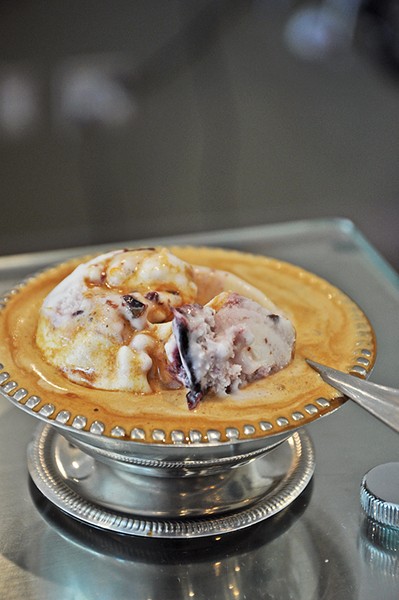 I'll always remember the first time I tasted jam made by Salt Lake City's Amour Spreads. It was during a "meet the producers" shindig at the Swaner Preserve and EcoCenter, a 1,200-acre nature preserve on the edge of Park City's Newpark development. I recall it vividly, because I'd never tasted jam as vibrant and delicious as Amour Spreads' pear lavender. I was instantly hooked.

John and Casee Francis' jam, jelly and marmalade business began with love—amour is love in French, of course—literally, at its inception. The couple was hiking during their honeymoon in Idaho and came across a 6-foot-high thimbleberry bush. "There were berries everywhere, on both sides of the road," John Francis says. They took the fruit they foraged, did a little research on the internet and began making jam in their cabin. Before long, the couple had made "three or 400 jars of jam" for friends, John says. What began as a hobby became Amour Spreads in 2011, after John left his job as an executive recruiter.

The couple's jam-making methods are also a labor of love, involving nothing more than fresh, natural ingredients, with all of the jams made by hand in copper pans. They now work with a variety of Utah farmers for their fruit supplies—everything from Bear Lake tangelos and blackberries to heirloom tomatoes grown by Casee herself.

For years, John won awards for his fiddle-playing—like the Old Time Fiddlers National Finals Senior Champion. Now, he and Casee are winning awards for the remarkable jams, including a prestigious Good Food Award for their black currant blackberry. When it comes to jam, they aren't fiddling around.

Last year, the Francises expanded their reach by opening Amour Café near Liberty Park. It reminds me a great deal of the owners themselves, and their approach to most things: It's simple, but sensational. The airy, well-lit space would be right at home in Portland or Berkeley, right down to the salvaged 120-year-old church pews.

The restaurant is open for breakfast and lunch, with a lean menu that demonstrates they're not trying to be all things to all people—and yet, everything is appealing. There is a large selection of Bubble & Brown pastries, which can be enjoyed with a range of beverages from drip coffee to cappuccinos, cold brews and seasonal housemade Italian-style sodas made with fresh fruit. I loved the fizzy, effervescent blackberry soda during a recent visit.

The staff at Amour Café is both knowledgeable and unabashedly friendly, taking orders at the counter and delivering food to tables.

My favorite menu item is the prosciutto plate ($9), one of three savory scrambled egg options; there's also a pesto plate ($8) and cured salmon plate ($10). I have never—even in France—encountered eggs that were so fluffy. At Amour, they come three per order and are steam-scrambled, resulting in light, delicious eggs that aren't greasy. The prosciutto plate comes with that trio of scrambled eggs with thin-sliced Creminelli prosciutto, whole wheat toast and house spreads.

The café also dishes up one of the tastiest grilled cheese sandwiches ($7.50) I've gotten my lips around lately, served with their signature tomato jam. Try the soup and half-sandwich option for $9. On your way out, pick up a jar or two of Amour Spreads jams or marmalade, along with a scoop of housemade gelato for the full experience.