Assaults on the quest for eternal vacation 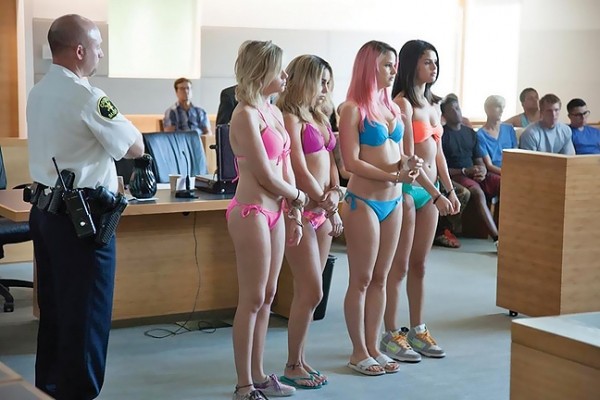 Provocateur: It’s such a loaded, even lazy term. Sure, it might seem to apply to Spring Breakers writer/director Harmony Korine as much as it would to any filmmaker. After all, he is the guy whose career launched as a teenager with the script for Larry Clark’s incendiary teens-in-trouble opus, Kids, and whose output has included a movie about pranksters roaming the streets humping trash cans (fittingly titled Trash Humpers). Even in his short films, he does stuff like making his “protagonists” wheelchair-bound South Africans in footie pajamas on a shooting spree. You know, like you do.


The presumption of empty provocation surrounding Korine’s work—the idea that he’s basically daring you to keep watching, and doesn’t have a thought in his head besides goosing his audience—might lead to reading Spring Breakers in all the wrong ways. Indeed, his opening sequence—a slow-motion parade of young bodies on the beach, flashing bare skin while dancing, binge-beer-bonging and simulating plenty of illegal-in-multiple-states sex acts—feels like a brazen dare: “Go ahead, take me seriously. It’s really just all about the T&A here.”


That impression continues with the casting of his four lead actresses as a quartet of college friends who desperately want to head to Fort Lauderdale for spring break. Troublemaking ringleaders Candy and Brit are played by High School Musical’s Vanessa Hudgens and Pretty Little Liars’ Ashley Benson; Disney Channel ingénue Selena Gomez plays the Bible-studying Faith. Korine even casts his own wife, Rachel, as the final member of the four, Cotty. Ah, what a marketing tease: Come on in and see your innocent pop-culture dream girls lose their innocence.


But Spring Breakers isn’t about losing innocence; it’s about losing a grip on reality. Early on, as the girls realize that their collected financial resources aren’t enough to get them to Florida, Candy, Brit and Cotty decide to rob a restaurant (with squirt guns) to make up the difference. “Pretend like it’s a video game,” Candy recommends before the robbery, “like you’re in a movie.” And when we eventually see the way the heist went down—Korine initially shoots it from a distance, as Cotty circles the scene of the crime in the getaway car—we realize that they are playing the kind of badasses they’ve seen in media. They use the conventions of one kind of fantasy world to enable them to get to another one.


The problem with that fantasy world, as Spring Breakers unfolds, isn’t so much that it exists, but that those who dive in want it to exist without limits. As they revel in their party nights, the girls start to talk about never wanting to leave, about abandoning the tedious life they left behind to live together in paradise. “Spring break forever” becomes a kind of mantra, a desire for a perpetual life of consequence-free pleasures—living 24/7 in that opening montage of sun, sex and flaming youth.


Things get a bit more real when a would-be rapper/drug dealer who calls himself Alien (James Franco) enters the picture to bail the girls out of jail—while, paradoxically, also getting more tied up in fantasy. Franco is pitch-perfect as Alien, showing off his wads of cash and armory of weapons to Candy and Brit while talking about how he’s got Scarface playing constantly on repeat. He’s living a different kind of media-fueled hedonism, and as the girls are folded into his world, we get brilliant sequences like Korine scoring a crime spree to the sugary pop of Britney Spears’ “Everytime,” and a climactic pink-neon-lit shootout that feels like a Miami Vice outtake.


It would be easy enough to shrug it all off as yet another one of Korine’s alarmist warnings that the kids aren’t all right—a spring-break Reefer Madness where he wants to wallow in debauchery while wagging his finger at it, too. But Korine edits Spring Breakers into a surreal dream state that mimics its characters’ blissed-out conviction in their own invincibility; it’s too hard to find focus on real life in the middle of the pursuit of perpetual fun. If there’s a provocation here, it’s a poke to make you understand that something toxic happens on the road from wanting a vacation to wanting your world to be spring break forever.