About Endlessness
Over the course of 20 years, Swedish filmmaker Roy Andersson has remained committed to his stylistic gimmick—master-shot tableaux of simple situations, often building to absurdist punch lines—to the point where it's not clear what more he might have to say within this framework. Once again, his episodic scenes aren't really connected to any overarching narrative, though a couple of characters—including a minister despairing over his loss of faith—do recur at various points. Mostly, however, we have moments in the lives of everyday people, here supplemented with the voice of an omniscient narrator (Jessica Louthander) whose observations at times step on whatever simple emotion might have been found in a bit like a father pausing during a downpour to tie his young daughter's shoes, or a woman arriving at a train station to find no one waiting for her. At their best, Andersson's meticulously constructed shots can hit their black-humored marks, or capture something painterly in a scene of people transfixed by falling snow. At their worst, those shots can start to feel like someone doing a parody of a Roy Andersson movie. Available April 30 via SLFSatHome.org. (NR)

Four Good Days
Addiction stories are, unfortunately, all too common both in real life and in movies; this one finds enough spiky complexity to undercut the more obvious rhythms of family melodrama. Writer/director Rodrigo García casts his Albert Nobbs star Glenn Close as Deb, whose 31-year-old daughter Molly (Mila Kunis) is on the latest of many attempts to kick a decade-plus-long opioid addiction. The narrative focuses on a week-long span as Molly tries to clear her system of drugs to be eligible for an opioid-blocking medication, and García effectively captures how the years of Molly's addiction have left Deb unable to trust her at all, and practically wishing she could stop caring about her troubled daughter. Yet rather than making Deb a saintly mom, Close's performance adds a dynamic of guilt over the choices Deb made during Molly's childhood. García chooses perhaps the most prosaic manner possible to reveal that history, and you can almost predict where the final shot will take place as soon as a specific prop is introduced. There's still a lot of humanity here in two people figuring out if it's ever too late to give one another one more chance. Available April 30 in theaters. (R)

Limbo
It's not easy to combine deadpan humor and earnestness when dealing with a hot-button issue, and writer/director Ben Sharrock teeters awkwardly back and forth across that line. On a fictional island off the coast of Scotland, several immigrant asylum-seekers—including Syrian-born Omar (Amir El-Masry) and his Afghan roommate Farhad (Vikash Bhai)—wait for resolution of their status, unable to work or travel anywhere else. Most of the narrative is built around Omar's complex feelings about being separated from his parents currently living in Istanbul, while an older brother continues fighting in the Syrian civil war. But El-Masry's often-impassive performance frequently doesn't work with the more serious material, while providing a perfect counterpoint to the more humorous scenes like the ongoing classes in Western cultural norms taught by a well-meaning local couple. There's a lot of material to unpack in the struggles of immigrants to assimilate in places that don't always want them, while still worrying about those they left behind. And it's not easy for that material to coexist peacefully with punch lines about what an unwelcome sexual advance looks like, or getting so caught up in watching Friends DVDs that you start arguing about whether or not Ross and Rachel really were on a break. Available April 30 in theaters. (R) 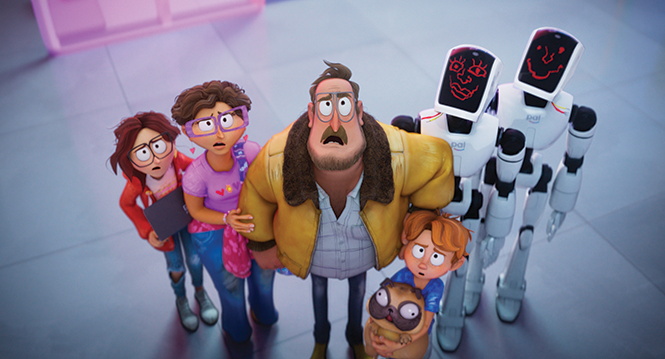 The Mitchells vs. The Machines
Credit to co-writers/co-directors Michael Rianda and Jeff Rowe for putting in the effort to give their lively CGI animated adventure a visual sensibility that doesn't feel copied-and-pasted from the work of their animation brethren. On the eve of her long-awaited departure for college, teenager Katie Mitchell (Broad City's Abbi Jacobson) ends up on a cross-country road trip with her family—dad Rick (Danny McBride), mom Linda (Maya Rudolph) and younger brother Aaron (co-writer/co-director Rianda)—just as a tech company's new AI robots are preparing to conquer humanity. The narrative through-line is a nice effort at real emotional content, built around the conflict between quirky and creative Katie and her frequently non-supportive dad, though it never quite finds its tear-jerking climax moment like top-tier Pixar. Still, the chuckles come fairly consistently, while Rianda and Rowe build the look of their action scenes in particular around Katie's own amateur filmmaker aesthetic, full of hand-drawn hearts and rainbows. In a story about someone longing for her own individuality to be appreciated, it matters a lot that The Mitchells vs. the Machines tries for its own individuality. Available April 30 via Netflix. (PG)