Prepare your skis for wacky condition 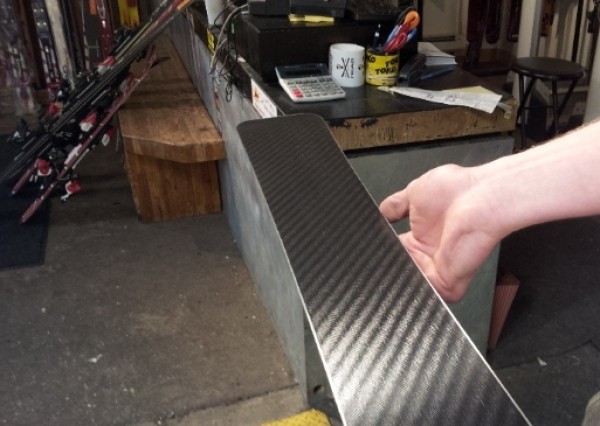 Wait ... spring skiing? But we haven’t had winter yet!


That’s right, and we might as well give up waiting; 2012 is the year winter forgot. But one wouldn’t think so by talking to a tourist. “Wow, Utah really does have the best snow,” said the out-of-towner sitting next to me on the lift. His family chose Utah after hearing about last season’s historic snowfall.


Though mountain-wise natives disparage current snow levels, locals haven’t stayed away. Resort parking lots are full daily. But this month is when numbers start to thin because it’s usually warm and dry enough to go biking or golfing.


Yet those who hang it up right now are missing the true delight of skiing at this time of year, probably because they don’t know how to avoid those herky-jerkies where the snow grabs the bases, interrupting momentum and requiring a quick balancing act.


There’s a solution to this—three solutions, in fact. But first, the science: Resort snow has been churned over and over nightly by grooming machines that repeatedly leave a thin layer of machine oil and gas residue. Meanwhile, the plentiful pine trees have begun releasing pollen, which is extremely sticky. The combination of pollen, oil and various chemicals make a substance that attaches to the bases of your snow gear like a magnet as you ride over it, eliminating a lot of glide and slowing you down. Spring snow is also wetter. Moisture grabs at the now-sticky base, creating suction that causes fast deceleration for a few hundredths of a second before releasing the base—the dreaded herky-jerkies.


But there are solutions. The first is the easiest: Buy some Teflon-based overlay at a shop and rub it over your bases before every run. Con: It’s a pain in the butt to have to keep doing this with every run, and these overlays dry bases so badly that you’ll have to wax them after a day or two on the mountain.


Second solution: Keep a plastic card in your pocket, like an expired credit card. When your skis start slowing down, use the card to scrape off the gunk. Con: It takes time, it takes effort and it, too, is a pain in the butt to have to scrape so often.


Third solution: Get a spring base grind. Jeff Butz, owner of the extremely popular Podium Ski Service in Park City, says, “The two things that will help you in spring conditions are base structure and, of course, the right wax. A spring structure helps break up the surface tension of water under the base.”


Unlike the bland grind for the hard and dry snow found at the beginning of the season, a spring grind uses deep straight lines to break wet-snow suction. Jonny Moffat, ski and snowboard tech for Jans Rennstall Tech Center at Park City Mountain Resort, says, “Structure is like the tread on the tires of your car. You’re just trying to displace water under the ski. If you try and ride with the factory grind (that came with the skis), you’ll stick really bad.”


A basic tune with a stone grind, edge sharpening and wax job averages a little over $40. If your base has deep dings, they should be repaired so water doesn’t get inside the core and cause your gear to warp. A full tune includes everything in a basic tune, plus base repair and the grind structure you request. Moffat says,

“A really good structure is more important than even the best wax.” Full tunings average between $50 and $60, but reparing a badly damaged base may add to the cost.


If you do your own waxing, don’t automatically go for yellow, Butz advises. “Snow conditions are all over the place right now,” he says. “There’s no one answer to what wax to use. It depends on when and where you’re skiing.”


Right now, snow is frozen in the morning, then warms to hero snow that allows you to snowride like a god. It gets a bit slushy in the late afternoon. As time goes on, the hero period between ice and slush gets shorter and shorter. So, quick: Get your gear prepped for spring and sample the joys of spring snowriding before the lifts shut down (see below for closing dates).


This is the best part of spring skiing and snowboarding: Many resorts start lowering their lift-ticket prices right about now. The tourists are gone; the price is affordable. Click the links below for details.

Get Out skiing, ski resorts