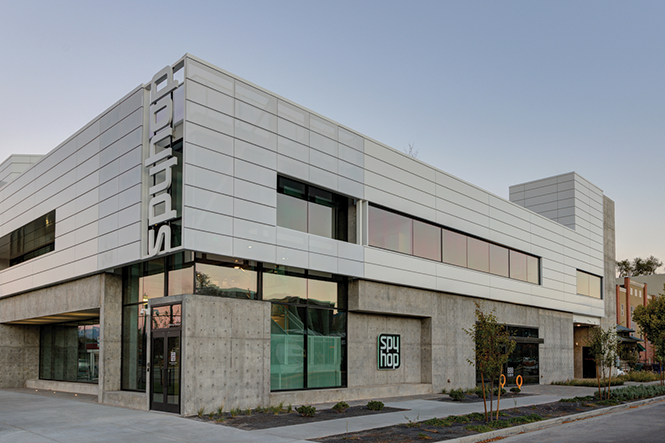 Schools of all kinds have struggled with the many "hows" of this past pandemic year, and that doesn't exclude organizations like SpyHop, Salt Lake City's longtime music, film, audio and design center for youth. Director of Marketing and Community Relations Larissa Trout says, though, that the local non-profit quickly developed a beneficial system of response—one that hinges on simply showing up for their students, and building an environment in which students can show up, too.

"Not speaking for all of them, but I think our students across the board, they need us," says Trout, just shy of the March 13 anniversary that she recalls as being the last day at SpyHop-as-it-was. "The message has always been there that young people need a positive adult role model. They need mentors, they need somebody in their corner who they can be their true selves with, and a pandemic doesn't change that. ... They continue to show up with us."

One thing the students expressed to their SpyHop mentors was their gratitude that SpyHop, too, had shown up in the immediate aftermath of last year's initial shut-downs. Part of their speedy response was owed to a January 2020 warning from a Singapore-based health worker friend of Executive Director Kasandra VerBrugghen.

"She had let Kasandra know, 'You need to be paying attention, this is coming,'" Trout says. "It gave us enough of a heads-up that, mentally at least, we had kind of shifted to a place where we were like, 'Does everybody have a computer they can take home? Can we let all of our kids have all the gear that we'd normally let them use?'" Come March, SpyHop was able to transition all in-person programming to online formats, swiftly re-connecting students with their mentors via Zoom—but more importantly, giving them a place to talk to their friends, to "just deal."

Within a week, they launched several new program models with online formatting in mind, including their Rewired Workshop and its virtual programming, Art Shop's on-demand tutorials and Beat Challenge. "There was no question, we just did it," says Trout. Planned events, like the capstone showcase for their Woodshedding class (which teaches songwriting skills) had to be reworked to digital, which was what led to their first Twitch stream. A pieced-together collection of video performances filmed by the students, often on their own smartphones, Trout says with a chuckle that it was "very endearing because it was very authentic."

It was also such a success that they turned to it again for the album release of their Musicology students. Led by local musician Cathy Foy, the class was one of the hardest to adopt to the pandemic, since it relies on bringing students together to learn to be in a band. However, last year's band, The Blue Collar Lovers, were eventually able to resume work once summer 2020 came around, releasing their album Mean Machine and celebrating it on a Twitch stream that was viewed by more than 100 people. "We did a really great video piece introducing the students and Cathy, we played their music. We have all kinds of music come out of our programs ... and this one was so authentic [because of] these students and their voices and what they had to say. And it wasn't as 'Debbie Downer' as what I thought it could have been."

All of this access—to classes, to gear and to community—has been, Trout thinks, a boon to the kids who are still with SpyHop. "Kids are resilient, but they've been impacted deeply. We see that, we see it in their attitudes, the work they're creating," she says. "I'm glad they're with us, because I'm less worried about them. I worry more about kids who don't have access to what we're doing, all those students we know are falling through the cracks."

SpyHop has been trying to fill those cracks by loaning gear and tech to students for free, as well as making their brand-new building at 900 S. 200 West a donation center for their Tech Liberation project, in which they take used laptops and computers and refurbish them for students to keep. The stunning new SpyHop building has also been used for student spotlights. Making use of windows that face out onto the sidewalk on 900 South, this winter they began projecting students' visual work out onto the glass from inside, accompanied by audio installed on the second floor.

The programming returns on March 15, screening weeknights at dusk to 8 p.m. until March 26. And excitingly, the building will open for real people soon—their rooftop venue will soon become active as a new event space, and they're opening up to in-person classes thanks to the space's handy HVAC system.

"June 7 will be the first day that we have students in our building," says Trout. "We are more than ready to overcome the next hurtles with COVID, and recognize that we need to be open, it is time, we can do it safely and we can invite students into our space and utilize our incredible resources."

In the meantime, their students are still busy. Don't miss their next virtual showcase when Woodshedding students play on March 11 at 7 p.m., at twitch.tv/spyhopproductions.