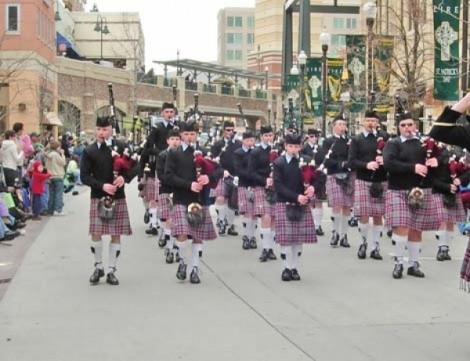 Opportunities to wear 30 pounds of wool while blowing like hell on a bagpipe don’t exactly abound in Utah.

That’s why Salt Lake Scots Pipe Band manager Ian Williams and his fellow bagpipers look forward to the St. Patrick’s Day Parade each March where they get to kick up their kilts. However, the much-loved parade — first held in 1864 and operated annually since 1978 — could be threatened this year due to a shrinking budget.

The Hibernian Society of Utah, the nonprofit that organizes the parade, hopes the “Save Our Parade” fundraiser on Friday, Feb. 5, will keep the pipers piping. A benefit concert featuring Irish music from Swagger, The Heathen Highlanders Pipe Band and The Crawford Irish Dancers is planned at the Judge Memorial High School auditorium.

The parade — which takes place the Saturday of or before Saint Patrick’s Day — in recent years has begun just north of The Gateway mall and winds south through Gateway, ending at the Greek Orthodox Church.

The Hibernian Society of Utah, like other nonprofits, lately has received reduced funding from the Salt Lake County Zoo, Arts and Parks (ZAP) and is experiencing a decline in memberships. But what sent the organizers into a panic in November 2009 was a bill for estimated costs for the 2010 parade from Salt Lake City for $7,500. Mayor Ralph Becker, looking for dollars to fund city operations, has reinstituted an obscure 16-year-old ordinance that allows the city to charge parade, festival and event organizers for costs such as police overtime or trash collection. When the Hibernian Society submitted its 2010 specialevent application, the proposed fee of $7,500 came back, essentially busting the society’s budget.

They weren’t alone. The Days of ’47 Parade also received an estimate of costs from the city, according to Rich Sorenson, an attorney with Salt Lake City firm Jones Waldo who was hired to look at whether charging a parade violated a nonprofit’s freedom to assemble. He concluded that parades were constitutionally protected by the U.S. Supreme Court ruling of Hurley v. Irish American Gay Group, which referred to a St. Patrick’s Day parade in Boston.

“Under free-expression activity, the purpose is to engage in constitutionally protected assembly,” Sorenson says. Because of constitutional protection, parades such as the Hibernian Society’s St. Patrick’s Day Parade should be exempted from costrecovery bills.

The Days of ’47 organizers negotiated with the city in December 2009, and it was decided that parades could request a fee waiver. However, parades need to reclassify their applications from special event—which includes commercial fees—to free expression, which exempts them from the ordinance. Both the Days of ’47 and St. Patrick’s Day parades have resubmitted applications and fees have been waived.

How Are Other Utah Events Faring?

The waivers would apply to parades, but not festivals, which have also been hit hard with this ordinance. “This will be a learning process for us and the city,” says Utah Arts Festival Director Lisa Sewell. “We have tried every angle we possibly can to sway the city. They are not budging.” From her experience, the city is willing to negotiate which fees they are responsible for. Right now, those fees would be about $15,000 for the 2010 festival.

The enforcement of the rule came about because events are costing the city more in resources, says Becker’s spokeswoman Lisa Harrison Smith. But the city is working with individual groups to minimize the impact where possible, especially nonprofits.

“Some events were charging $50,000 in fees [that weren’t being collected],” Smith says. “We are not in a position as the city to pay their bill, especially under current budget constraints.”

Not all groups are suffering, but the fees could still pose a burden. The Utah Pride Festival, which includes a parade, reports it is doing well financially, thanks to strategic planning, reducing expenses and maintaining corporate sponsors, says Utah Pride Center executive director Valerie Larabee. Proceeds from the festival support the nonprofit Utah Pride Center.

Of the new cost-recovery fees, public safety fees will hit Pride the hardest.

“We have been part of a dialogue with the mayor’s staff. It’s been slow but good,” Larabee says. To take the edge off, the city has slightly modified some other costs, such as lease rates for using city property. A few weeks ago, the festival submitted its application and is awaiting the fee schedule, but whatever it is, Larabee says, the organization is committed to having the festival.

The fee waiver is good news for the struggling Hibernian Society of Utah, which is short on corporate and individual donors. (Note: City Weekly has served as a media sponsor for the St. Patrick’s Day Parade). “We’ve had this parade for 31 years, and I’ll be damned if we let it go away,” says parade cochair Greg Neville. He says that the parade will go on in 2010, and even if funding continues to flounder, the parade will continue, although it may be scaled down.

“We carry on because we’re Irish and we’re resilient,” Neville says.

The costs of the parade and accompanying events vary from year to year but usually range between $20,000 and $25,000, which covers everything from insurance policies to toilet rentals. In 2009, the Hibernian Society lost more than $4,000 putting on the parade, Neville says, which impacts this year’s budget. For instance, it no longer can afford to bring in traditional Irish performers.

Hibernian Society board member Gerald McDonough has participated in every parade since 1978, and has been a member of the Hibernian Society for just as long. However, as generational attitudes shift and the economy struggles to rebound, he sees fewer families willing to pay the $40 annual memberships. So, to keep the parade floating, the Hibernian Society has canceled other society events and reduced contributions to the Ulster Project, which brings Irish youth to the United States to learn cultural and religious tolerance.

“So now, the majority of our yearly funding comes from the Siamsa [postparade gala with Irish music, dancing and drinks],” says McDonough. The society, however, cannot continue to squeak by every year with crossed-fingers. He is hopeful that the fundraiser will help. “If we don’t come up with $8,000, we will be in trouble.”

Forlorn at the thought of Salt Lake City without the St. Patrick’s Day Parade, pipe band leader Ian Williams laments, “The green would dull, and we’d be left with a piss-poor shade of yellow beer to drown our sorrows in.” But more than a loss of color, Williams says, Utah’s Irish would lose an expression of their culture and heritage.