Bill Murray does his best with the showy antihero of St. Vincent 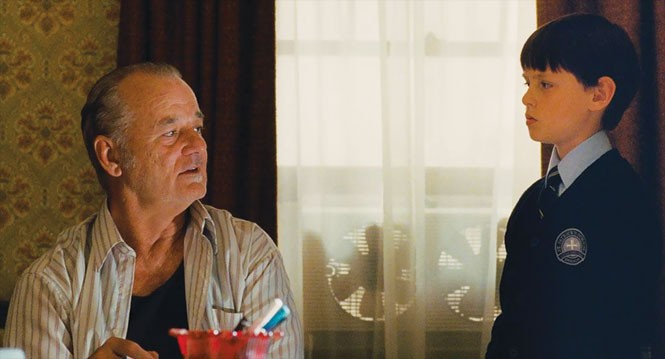 Because while a Character is created as something out of which a story emerges, a Part is created to appeal to an actor. A Part has "moments"—catchy lines of dialogue, big speeches, emotional breakdowns. Both can be executed on the page well or badly, and both can be performed well or badly, but they're still fundamentally aiming for a very different audience response. Characters may be great pieces of writing, but Parts? Well, Parts get noticed when people talk about awards.

Writer/director Theodore Melfi has given Bill Murray a classic Part in St. Vincent. He plays Vincent MacKenna, a Brooklyn native who's introduced to us as the kind of guy Charles Bukowski would think was living a bit too hard—an alcoholic in dangerous debt from gambling on horse races, living in a disastrously messy, underwater-mortgaged house, with only his cat as company. But he's still got enough life in him that he can throw down a funky solo dance to Jefferson Airplane's "Somebody to Love." Vincent's got your attention. Parts have a way of doing that.

The plot thickens when new neighbors move in next door: newly single-mom Maggie (Melissa McCarthy) and her 12-year-old son, Oliver (Jaeden Lieberher). Maggie's new job as a CAT-scan tech at a local hospital has her working late hours, so she needs someone to keep an eye on Oliver when he comes home from school; Vincent needs cash. And so Vincent comes to take Oliver under his dissolute wing.

The surrogate-father relationship drives most of St. Vincent, providing awkward moments such as Vincent taking Oliver with him to the track or his local bar, and the gradual softening of the misanthropic caretaker that is fundamental to stories of this kind. When bullied Oliver needs somebody to show him how to stand up for himself, a disgusted Vincent steps in to teach Oliver a few tricks; it's like Bad Santa, if what Bad Santa really wanted for Christmas was to be The Karate Kid.

But the problem with St. Vincent isn't merely that it's schematic; it's that it's so schematic. It doesn't take much time before we see Vincent visiting a patient in an Alzheimer's care facility, whose relationship to him is fairly clear from the outset. He looks out for the health-care needs of the pregnant Russian prostitute (Naomi Watts, accent-acting her ass off) he frequents. And we see Oliver's religious-studies teacher (Chris O'Dowd) assign the students the task of creating a biography of someone they consider a real-life modern-day saint, and it's a complete mystery who Oliver might consider as his subject if you forget the name of the movie you're watching.

The unfortunate part is that the performances really are strong enough to carry St. Vincent through most of its clunky manipulations. Murray aims for something more than "get off my lawn" curmudgeonliness, finding sparks of funky energy that give Vincent vitality beyond his asshole-in-need-of-redemption roots. Young Lieberher is also pretty solid in a convincing take on adolescent geekiness, and McCarthy nicely underplays the role of a struggling mom trying to figure out her new identity. When those three are playing off one another—the less said about Watts' thankless role, the better, really—St. Vincent hits more than a few funny, satisfying moments.

But there's a degree of calculation at the heart of this movie that makes it impossible to become immersed in it, no matter how sloppily appealing Murray may be in individual scenes. The whole thing is built to reach its crescendo during Oliver's school assembly presenting his report on "saints among us," where our emotionally wounded antihero will realize that somebody gets him, having found his humanity in scenes that might as well come with a sign reading "LOOK FOR HUMANITY HERE." Where actors get a chance to disappear into Characters, St. Vincent shows us what's expected to happen when actors get Parts: They stand at center stage, receiving an award, waiting for everyone to applaud.