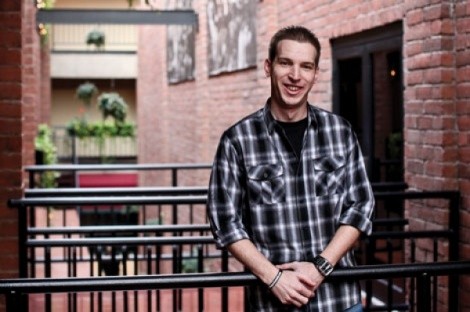 John Hilder is a comedian from Sandy whose potty mouth led him away from Utah and the LDS Church to Las Vegas to pursue a stand-up comedy career. Hilder now lives in Salt Lake City again and will be performing at Wiseguys Comedy Cafe Trolley Square (650 E. 500 South) Friday, Jan. 21-Saturday, Jan. 22. Hilder talked to City Weekly about his comedy roots and how he’s actually not a black sheep.

When did you decide to become a stand-up comic?
I think it was my junior year in high school that I realized what I wanted to do. My brother was on a Mormon mission at the time, and I just felt directionless. He called me one day—which he shouldn’t have been, ’cause he was on a mission—but he told me that I’d always been funny, and he thought that would be a good idea for me. He told me just to Google “how to tell a joke,” and that’s how it escalated. I hated high school; I ended up dropping out and getting my GED because I hated it so much. I ended up cutting classes to write jokes. I didn’t actually get onstage until I was 21. I was writing jokes for four years before I stepped on a stage. And then instantly found out that they weren’t any good.

Why did you take an edgy route instead of embracing Mormon comedy?
I never had the idea of taking an edgier route. And if I’d started [in Utah], it might not have happened. My move down to Vegas was more for a change. I’d only known Sandy. In Vegas, you start out in the most hostile circumstances you can imagine. You’re forced to become an edgier comic than you would be if you were starting out in a fairly friendly comedy club.

Are you too edgy for Utah?
It is a little bit edgy for Utah. I started in Las Vegas, which gave me that initial edge; that might make me a little rough for some people in Utah, but Utah is who I am as a person. That’s where I was born and raised, and that’s influenced my comedy as much as anything—maybe to the extreme of filth, trying to get away from what I grew up around. I think it can definitely be a little bit much for some people in Utah. For a lot of people, I think I’m exactly what they’re looking for.

What was your family’s reaction to you becoming a comic?
Shockingly good. Everything I ever read or researched about standup before doing it was to expect a complete lack of support from family and friends, to hear everyone tell you that you’re insane. My family couldn’t be more supportive. They were happy I finally had a direction in my life. My dad’s a judge [Robert Hilder, 3rd District], my mom’s a teacher and I’m a comedian, so the apple fell far from the tree, but somehow it didn’t make me a black sheep. My dad even came down to Vegas and saw me at a horrible dive bar at 2 in the morning. He usually goes to bed at about 8 p.m. It was pretty incredible to see him out there keeping his eyes open that late in a seedy bar in Las Vegas.

If you’re from Utah, how come I’ve never heard of you?
I don’t think I’m viewed as a local comic. I’m not there that often. I’ve been pretty fortunate to get a decent amount of work outside of the state, which is fantastic, but it’s given me no opportunity to get any kind of local presence, where I actually lived and grew up and know and love people. It’s a double-edge sword because I’m fortunate enough to be out living my dream, working as a comic, but there are people I went to high school with who don’t have any idea that I do this.