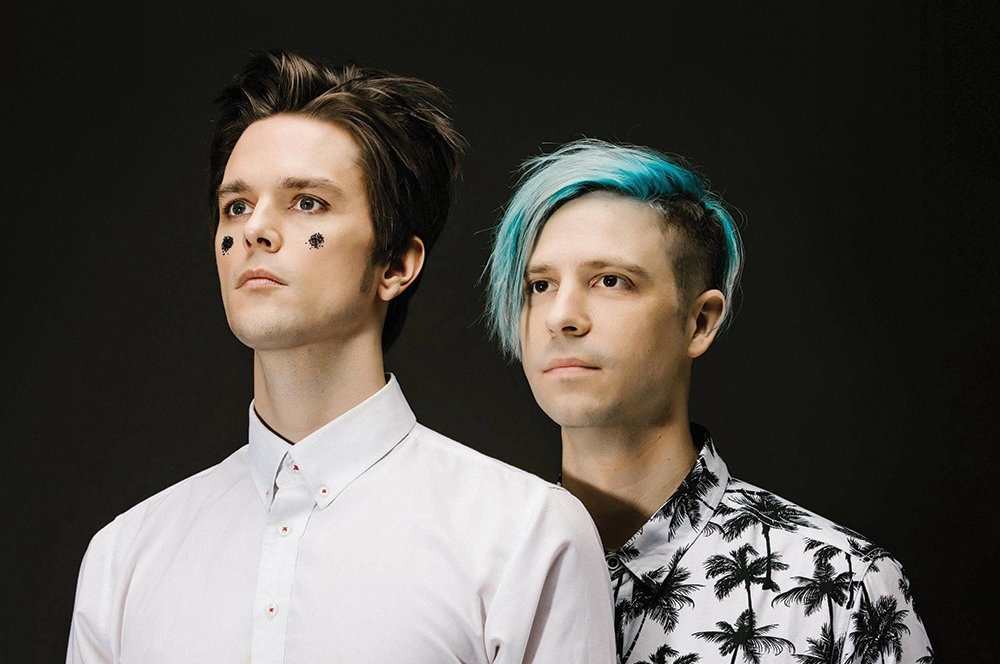 For a musician, moving from an established, successful outfit into new, untested waters is a major risk. Fickle fans often turn up their noses at anything deemed outside the orthodoxy. The "former member of" media angles get old quickly. And the pressure to follow up one hit with another can wear down even the most seasoned veteran.

That's why Utah natives Dallon Weekes and Ryan Seaman kept their '80s-inspired glam rock project I Don't Know How But They Found Me (styled as iDKHOW) a secret for as long as possible. In 2017, both musicians left their longtime bands—emo-pop superstars Panic! At the Disco for Weekes, and post-hardcore favorites Falling in Reverse for Seaman—after nearly a decade each.

Weekes, who grew up in Clearfield, and Seaman, who grew up in Park City, traded radio airplay, commercial success and sold-out arena tours for a bare-bones existence they went to great lengths to hide as they honed their synth-driven, panoramic sound. "I've seen this movie before, you know?" Weekes muses when asked about iDKHOW's origins. "People from successful bands go out to start side projects all the time, but you can't make anybody care. The biggest challenge for a band like us was to build credibility."

Instead, Weekes and Seaman made their debut appearance at Emo Nite Los Angeles in December 2016, working out propulsive early singles like "Modern Day Cain" and "Choke" while refusing to even confirm reports of iDKHOW's existence. "We wanted to circumvent people looking at us and going, 'You only got here because you came from that' as honestly as we could," Weekes says. "We didn't want to exploit the fans of [Panic! At the Disco and Falling in Reverse] and say, 'Come look at this new thing we started!' It would have been easy, but it also would have been disingenuous."

Once Weekes and Seaman made their departures from their previous bands official at the end of 2017, iDKHOW finally went into overdrive. The alt-rock icons at Fearless Records won a bidding war of sorts by promising the band complete creative control, which led to the November 2018 release of 1981 Extended Play, a bubbling cauldron of swirling space rock, atmospheric art pop and sardonic lyrics. After the New Year, the EP hit No. 1 on Billboard's Heatseekers chart and quickly started accumulating alternative radio airplay.

Their rise was accompanied by a tongue-in-cheek backstory about iDKHOW being a forgotten 1980s cult band resurrected by archival recordings on YouTube. That biography spoke not just to iDKHOW's creative influences—astute listeners to "Choke" will surely pick up the nod to the 1982 classic "Come On Eileen"—but also to a time when music discovery came not through streaming algorithms and social media recommendations, but through old-fashioned passion. "You just don't really see that anymore," Weekes says. "Nostalgia gave birth to the idea of the band"—Weekes was born in 1981, when MTV began its decade-long reign as a musical tastemaker—"but looking at the modern music landscape, you're constantly being sold something. It gets so exhausting. I didn't want to be a part of that. I wanted to step around it."

Weekes acknowledges the role that Salt Lake City played in iDKHOW's attempt at relative anonymity, pointing to revered local bands from years gone by like Starmy, Rotten Musicians and Tolchock Trio. "So much amazing talent came out of this town, even if they maybe never got the chance to stand on a national or worldwide stage," Weekes says. "Presenting our band as something from 30 years ago that never had a chance and just got forgotten about is inspired by the time we spent hanging out in Salt Lake City and Provo. It's a pretty common story, and we wanted to retell it in a semi-fictional way."

As iDKHOW grows, maintaining that aura of joyful mystery is a must for Weekes and Seaman. On their upcoming national tour, they'll make a stop at Phoenix's Big Surf Waterpark before moving on to Atlanta's popular Shaky Knees festival and shows at major venues like House of Blues (in Houston and Dallas), Bowery Ballroom in New York City and Lincoln Hall in Chicago. But first, the band will perform right here at home with an April 25 tour kickoff show at In the Venue.

"Initially there was no Salt Lake City date on the tour, and that was unacceptable to us as Utah boys," Weekes says. "We let that be known to the booking agent, label rep and management, but it wasn't really a priority for them. So we set up a secret show at Kilby Court, just to have some fun in our hometown, before the whole team got word of that and said, 'I guess they really mean it—we better book a Salt Lake City show.'"

Although Seaman still lives in Los Angeles, Weekes moved back to Salt Lake City in 2018 with his wife and two young children. He says he's enjoying the chance to get reacquainted with his old stomping grounds, even if dad life keeps him from attending as many local shows as he'd like. Next up for iDKHOW is the debut full-length that Weekes and Seaman hope to finish in 2019, this time with an increased production budget so they can inject their decadent glam-rock jams with even more visual polish. The band's backstory will evolve too, Weekes says, reflecting a shift from secret side project to successful main act.

Still, iDKHOW aren't going to forget their roots anytime soon. Swearing by the simplicity of their two-man setup, Weekes says that he and Seaman still believe it's the music that matters. "We made our own thing for ourselves, playing in secret and denying our own existence for a year," he laughs. "We wanted to see whether the art we were making could stand on its own. Now that we know it can, we never want to do the same thing twice."