Fans out in full force in Florida 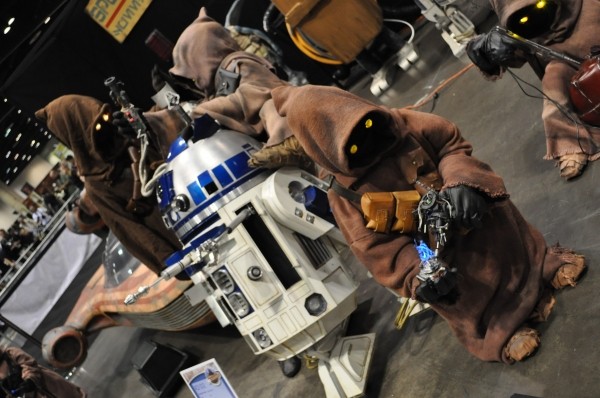 Every so often since 1999’s release of The Phantom Menace, Star Wars fans have been gathering at official Star Wars conventions called “Celebrations.” On Aug. 23-26, Star Wars Celebration VI was held in Orlando, Fla., to much fanfare.

Since Star Wars Celebration is a convention devoted to just one thing, it brings out only the most ardent and enthusiastic fans (like myself) and gives us a place to share in our love of the deep mythology that George Lucas gave us, starting 35 years ago. These conventions also bring out the actors behind all of our favorite characters. I was able to rub elbows with the likes of Mark Hamill (Luke Skywalker), Ian McDiarmid (The Emperor) and Daniel Logan (Boba Fett), among many others. At one point, I even got into a drunken argument about the prequels with Anakin Skywalker himself, Jake Lloyd. It was a little bizarre—but that’s a story for another time. George Lucas himself showed up and made mention of the fact that there might be a new kids-oriented Star Wars show in the works.

For fans of the television show The Clone Wars, Star Wars Celebration was the site of the red-carpet premiere of the season five opener. Darth Maul (voiced by Star Wars superfan Sam Witwer from Being Human) is back for revenge, marauding the outer rim with his brother, Savage Opress, in an effort to destroy the Jedi and bedevil the days of the Sith. The premiere ended on a cliffhanger that’s going to leave me hanging until the season starts Sept. 29. At that screening, it was also announced that The Clone Wars is going to be switching times and will premiere on Saturday mornings instead of Friday nights.

Perhaps the biggest news for many is the announcement of Star Wars: Detours, a new comedy show from the minds of Robot Chicken creators Seth Green and Matt Senreich. The show has been a well-known secret for years, but this is the first time any footage has been shown. Detours feels like an animated sitcom, set during the time between Episode III and Episode IV, where the first Death Star is under construction and the cover story is that it’s a giant mall. Naturally, the stormtroopers there feel like they’re on the worst duty possible and are nothing more than glorified mall cops. It also features a young Princess Leia as a spoiled brat of a senator on Coruscant, and Han Solo and Chewbacca, the world’s most hilarious heterosexual old married couple.

Detours was entirely financed and produced by Lucas Animation, so there is no television network involved yet. At least one season is completed, though. The footage they showed (which can now be viewed online) was hilarious. It’s Star Wars in a way we’ve never seen it before.

I also took to a stage on the final day of the convention to present a panel—including director Kyle Newman (Fanboys), Clare Grant (Team Unicorn) and author Pablo Hidalgo—on fans and their love of the prequel trilogy. We spent an hour answering fan questions and elevating the prequels to their rightful place. And even better news about the prequels was released: We’re getting Attack of the Clones and Revenge of the Sith back on the big screen in 3-D next fall, back to back.

I’ve been to all but one of the Star Wars Celebrations held in the United States—I missed the fourth because I was working on a documentary—and they’ve all been some of the most cherished experiences of my life. If you’re feeling adventurous, one is being held in Germany next year. Consider it, here or there, because the force of Star Wars is alive and well, and it will be with us all—always.