With all the crazy stuff they're likely texting, it's no wonder the Capitol Hill goons want some privacy. 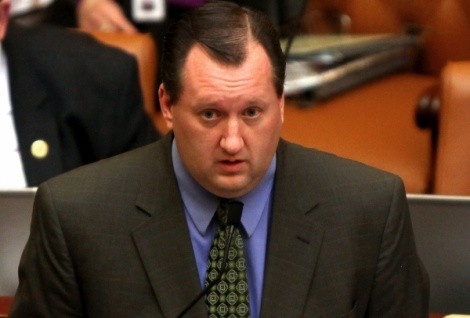 In a recent episode of HBO’s Big Love (very nearly based on a true story), Utah’s newest and only honest state senator, Bill Henrickson, was grousing about how his public admission of polygamy was seriously harming his stores. Protesters, ostensibly camped out on marching orders from their local LDS bishops, were causing anyone who didn’t previously know he was sleeping with three women to shop elsewhere. Bill proclaimed that his Murray store was in special jeopardy because Murray is a heavily Mormon community and, well, they just aren’t going to shop with a Non-Mormon Mormon like Bill Henrickson.

I live in Murray. So it was news to learn that the Murray I’ve lived in off and on since about 1975 is so heavily LDS. Murray has about a dozen bars and, until recently, a really nice strip joint. It’s long been known as a blue-collar place where immigrants who worked  in the old Murray smelter populated nearby neighborhoods. Forgive the row of car dealerships just past 5300 South on State Street, and Murray is an attractive place to live—it’s centrally located, has TRAX stops, parks, its own school district, cops and firemen and its own utilities.

For continuing coverage, go to
CityWeekly.net/HB477

Especially appealing to me is that I’m represented in the Utah Legislature by two Democrats: Mark Wheatley, who lives just around the corner from me, is my state representative. Gene Davis, who has served in the Legislature since Utah was granted statehood, is my state senator. I know and like both these fellows. Sunday morning, I learned that each had voted in support of HB477—the bill that would eviscerate once and for all any notion of fair play in Utah politics. Well, let’s just say, I was a little pissed.

You would be, too, if you paid the high ransoms that City Weekly does to get even the simplest public record from such insecure windbags the likes of Mark Shurtleff—whose office delights in stalling and overcharging City Weekly and, in so doing, ended up botching a recent GRAMA request of ours by tossing in some records we didn’t ask for. If you read “What You Don’t Know About Me Could Hurt You: Overburdened Utah regulators can’t keep the bad doctor away” [Sept. 23, 2010, City Weekly], that’s where that story came from. I take the position that it’s the Mark Shurtleffs of the world who are the problem. However, my representatives voted with the Republican majority to make such GRAMA requests by the media and private citizens even more difficult.

So, I snapped off a couple of e-mails. Depending on where one grew up, a person might claim that my letters to each—CC’d to Utah’s Democrats on Capitol Hill—were unprofessional and harsh. Perhaps, and tough. Or they could accurately reflect the reaction of thousands to the open disdain our elected officials have for the common citizen. To his credit, Wheatley got back to me quickly and acknowledged he regretted his vote, which he admitted was made in haste after some bad advice and cast without a proper vetting. OK, I can live with that—for nearly 27 years now, this paper has wondered why it is that, come the end of the legislative session, another liquor bill was passed with little or no input from citizens or the liquor industry.

And for those 27 years, we’ve kept saying that Utahns need to wake up because all those bills did was establish a course on how to become elected into a dominant voting bloc—by running hard against liquor and high on morals—as well as set the template for passing damned near anything with just a few winks, nods and a secure back room. We warned that once legislators tasted the abuse of power, they would become more powerful and more abusive and find new targets. And they have. Which prompted me to ask Sen. Gene Davis the following questions:

Why didn’t you pick up your government-provided phone and make a free call to me for some insight? Did you speak to or consult with any persons in the media at all? Who and when? Exactly how is the public better served with this bill as law? And finally, Chris Buttars did better than you on this one. How does that make you feel?

That’s right, the left’s favorite whipping boy, Sen. Chris Buttars, R-West Jordan, cast the only Republican vote against HB477. Unreal. HB477 is currently amended thanks to public and media pressure. Watch everyone take credit for that turnabout—especially the big guns who didn’t stand up a few days ago but want to look like heroes now. Why, even Davis is against the bill now, and he told me himself in a generic, canned response I got Tuesday.

We’re left to wonder who provoked chubby, unknown Utah County representative John Dougall, R-Highland, to present this bill in the first place. He hasn’t said a peep since the bill was pulled from the governor’s desk—well, not counting his busy Facebook page, that is. That’s it—let’s just Facebook friend our politicians and dialogue that way. Or how about Twitter? Not. It’s those danged Twitter direct messages, text and instant messages that HB477 wants to especially protect from public view, no matter that our taxes pay for the devices that send and store them.

Maybe they don’t want you to see texts like these that are currently rumored to be circulating on Capitol Hill:

Dang! Henrickson’s 3rd sis wife is hot. Makes my 2nd look like an old maid and she’s only 19. #biglover

Psst. Am I for this bill or not? Fwd me voting memo. #churchoutofpolitics?yeah, right.

Why does AG Office call me Wall-E? #DougallforSenate