Old-school ways are kept alive at Beltex Meats and Tradition. 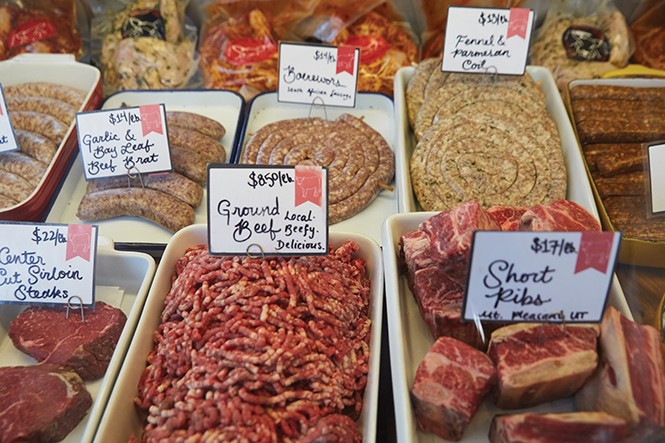 The corner of 900 South and 500 East in Salt Lake City is quickly becoming very flavorful, steeped in tradition and the newish "roots" culinary movement. In that vicinity, Beltex Meats butcher shop and Tradition restaurant are next-door neighbors. Both are welcome additions to the thriving SLC food scene.

Hailing originally from Miami, Philip Grubisa has worked as a chef—most recently at The Farm in Canyons Village—but he has butchery in his bones. Three years ago, he could be found at the Downtown Farmers Market selling brined pork chops and country paté. That business was so successful that it led Grubisa to open his own artisan butcher shop, Beltex Meats, and to supply local chefs and retailers such as The Market in Park City with his high-quality meat products. Brent Whitford of Red Bicycle Breadworks uses Beltex sausage for some of his take-and-bake pizzas, and Chef Briar Handly puts Grubisa's products to work at HSL, as does the newly opened Tradition for their "pigs in a blanket" dish. Many other Utah chefs turn here for their meat and pork products, especially charcuterie.

Beltex is the only butcher shop I've ever encountered with a bookcase and sofa. In that regard, it's quite nouveau, with more eye appeal than the typical meat market. But Grubisa believes in traditional ways of butchering and curing meats, beginning with utilizing the entire animal. "At the end of the day, our waste baskets are very light," he says; virtually every part of the animal is used. Stuff that might not be quite fit for human consumption is turned into gourmet dog treats, or donated to Tracy Aviary to feed vultures and other animals. In addition to sought-after cuts such as center-cut pork chops and rib-eye steaks, Grubisa and his staff are educating consumers to appreciate lesser-known cuts like beef gooseneck (from the bottom round) and products such as pork butter.

Beltex sources everything regionally, including animals from producers like Christiansen Farms and Pleasant Creek Ranch, for its whole-animal butchery. Not only is the quality of the locally raised animals of the highest order, but according to Grubisa, it's also much more cost effective to buy and butcher an entire hog, for example, than to purchase boxes of chops, sausages, hams, bacon, etc.

You'd probably be surprised at how small the curing room is—no bigger than a walk-in closet. But it's there that Grubisa experiments with different yeast cultures, molds and fermentation techniques to create his world-class salami, chorizo, prosciutto, pastrami, ciccioli, hog's headcheese, kielbasa, capicola and many more artisan charcuterie items.

During a trip to Italy, Grubisa was pleased (and reassured) to find that generations-old, family-owned artisan butchers were using the same traditional methods that he was implementing in Utah. Unlike mass USDA meat producers, however, he doesn't want every batch of salami, for example, to taste identical. Making charcuterie is as much a science project as it is an art, and he enjoys working with various mold and yeast strains to produce a unique "terroir." However, as they age and evolve, one batch of salami might taste different from the next. That's part of the excitement of small-scale, artisan butchery.

In addition to its wide range of meat products, Beltex also sells excellent ramen and other types of broth, plus gourmet sandwiches on Saturdays. But don't dilly-dally—they sell out quickly.

Just a handful of steps from the butcher is its new neighbor, Tradition. Boasting "comfort food and cocktails," it has strains of the South flowing through its veins, as you'll quickly surmise by glancing at the appetizers. Included is a contemporary spin on classic fried green tomatoes ($10), which comes with chipotle aioli, cilantro pesto and chili jam. Other hearty starters include pan-fried funeral potatoes ($9), fried okra ($9), fried goat cheese with watercress ($13) and clams with fried fingerlings, peas, carrots, leeks, scallions and bacon with white wine-cream sauce ($16).

Is everything fried at Tradition? No, but they do take frying seriously here. Classic Southern-style fried chicken ($20) is given a contemporary ass-kicking: crisp fried chicken confit with Thai basil slaw. Chicken and dumplings ($19), too, has an Asian tilt to it. I was surprised at the fiery broth seasoned with togarashi chili spices. The dish is delicious, but might more properly be called "dumplings and chicken"; while the chicken morsels were scarce, the biscuit-style dumplings were plentiful. It's a very satisfying dish that I'd happily order again.

Chef Kendra Pugh prepared a wonderful customized version of their Arctic char fish and chips ($20) for my wife, who is trying to eat gluten-free and asked if it could be made sans the standard tempura coating. We were happily accommodated with a beautiful piece of seared char accompanied by lemon aioli and fantastic tallow-cooked fries.

Tradition was bustling on the night we visited, and the communal-style tables were mostly filled. So we grabbed a couple seats at the bar, where I was delighted to find one of my favorite restaurant people—Natalie Hamilton, formerly of Finca—working as bar manager. She's as good as it gets.

Beltex Meats and Tradition are both mixes of old and new, uniting modern techniques and flavors with old-school values and quality. Everything old is new again.