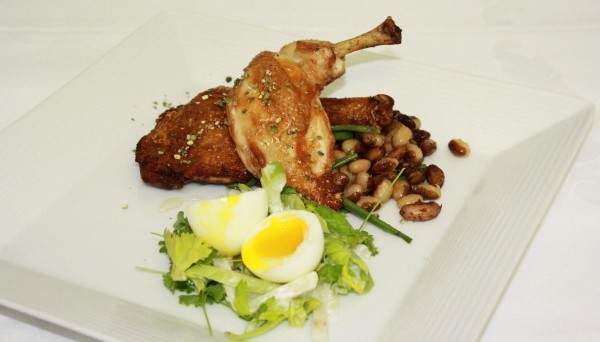 For the past 15 years or so—since he took over the reins as executive chef at Deer Valley’s Stein Eriksen Lodge—I’ve been following Zane Holmquist’s evolution as a chef. Recent meals at Stein’s afforded me the opportunity to check in once again on Holmquist and his culinary team.

If you’re staying up at Stein’s, you might want to luxuriate in the opulent accommodations and enjoy an in-room breakfast. Or, you could wander over to the Glitretind restaurant. The options are abundant at either venue, and range from housemade granola ($10) or scrambled egg whites with garden tomatoes and Utah feta cheese ($15), to Stein’s signature Norwegian potato & bacon pancake ($16). Whatever else you indulge in for your morning meal, I recommend ordering a side of country breakfast sausage. It’s Chef Zane’s (as he is known to everybody) own recipe and incorporates pork from local Tooele hogs, thyme, wine, shallots and spices—a luscious sausage link.

You might be surprised to find deviled eggs on the menu at a fine-dining facility like the Glitretind, but one of the things Holmquist enjoys is surprising people. So, he includes items like deviled eggs, but a decidedly upscale version: boiled eggs stuffed with cold-water Norwegian shrimp salad, served with Norwegian smoked salmon and toasted rye ($13). The pastrami sandwich ($16) is also anything but pedestrian. It starts with Snake River Farms Wagyu corned beef, which is cold-smoked at Stein’s for a few hours before it’s seasoned with a secret spice rub and roasted on low heat for 10 to 12 hours. It’s served on pretzel bread with housemade stout mustard and a relish of English origin called chow-chow; it’s a helluva sammich. Stein’s version of “pork and beans” ($14) is extraordinary, too: roasted pork belly with Great Northern beans cooked in molasses, mustard, tomato paste, brown sugar, onion, jalapeño, chipotle pepper and bay leaf. It’s not your daddy’s pork & beans! You might want to enjoy it with the “$20” mac & cheese, which is really only $13, but Holmquist says it tastes like it should cost $20. I thought it tasted like a million bucks.

But where the Stein’s kitchen really gets to strut its stuff is at dinnertime. Holmquist just recently launched his summer menu, and it’s brimming with temptations. For example: Ã¼ber-tender pork cheeks, anybody? Holmquist’s pork cheeks ($13) are braised in pork fat (the process called confit) for eight hours, then served on a bed of pea tendrils, fresh peas and pea puree. Yes, it’s as delicious as it sounds. But then, so is the buffalo carpaccio with horseradish & white-bean puree, caper salt, organic olive oil and micro oregano ($15). In fact, this dish was the favorite of both my wife and I, and pretty well encapsulates Holmquist’s current cooking.

Like most young chefs, when Holmquist started at Stein’s, he was brash and brimming with confidence. He still is, and I mean that in the most positive way. However, I’ve watched him mature, and, like many great chefs, head in a “less-is-more” direction with age. When Holmquist was younger, I felt like sometimes there was too much going on in some of his dishes. Now, his food is wonderfully complex, but not overly complicated or convoluted. He finds the best ingredients—working with more than 60 different food purveyors to stock his kitchen—and then allows them to sing. I think the current Glitretind menu is the best I’ve seen through the years; there isn’t a dud on it.

A good example of Holmquist’s less-is-more approach is the summer halibut dish ($33). It’s a generously portioned fresh halibut fillet that is quickly pan-seared to give it a beautiful golden crust, then roasted to medium. It’s served on “melted” tomatoes—the melting brings out the natural sweetness of the tomatoes—along with a salad of young kale, steamed sunchoke, lemon oil, salt and pepper, and garnished with green basil salt, which is made in-house. It’s a remarkably simple, yet remarkably delicious, dish and also happens to be gluten-free.

I decided to pass on the Kobe pot roast ($28) in favor of the MÃ¸sefund Farms pork tenderloin ($31), after Holmquist told us about MÃ¸sefund Farms. A property owner at Stein’s named G.C. Andersen, after spending many years traveling Europe, set out to single-handedly revitalize the dwindling Mangalitsa breed of pigs by buying all he could find in Austria and moving them to his farm in Sussex County, N.J. The free-range hirsute hogs graze on chicory, clover and local nuts, primarily. Well, Holmquist was right to rave about these pigs. I rarely order pork tenderloin in restaurants because it’s inevitably bland and overcooked. But this pork was seared and served pink on a bed of sweet potatoes rÃ¶sti; it was simply the most flavorful pork I’ve ever eaten. Accompanying that perfect pork was Brussels sprout leaves that were blanched and seasoned with Slide Ridge honey wine vinegar, along with crunchy Snake River Farms Kurizo cracklings, made from Basque-style chorizo. Impressive.

The duck & waffles ($37) was equally impressive: a kicked-up version of chicken & waffles featuring Muscovy duck breast from California’s Grimaud Farms, duck-leg confit and crisp waffles made with wild rice, malted flour, butter and eggs. The duck is finished by braising it in Vermont maple syrup, which lends a nice contrasting sweetness to the rich duck meat. Another winner.