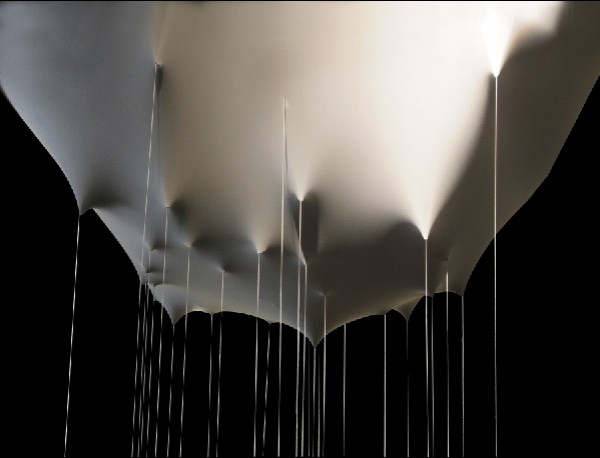 Artworks tend to include the imprint of the personality and social development of the artist, on some level or another. For installation artist Stephanie Leitch’s new work “Untitled Apogee” at the Utah Museum of Contemporary Art, the shape of the work itself took on a kind of psychological geography. Specifically, it’s an artistic reaction to the LDS culture of Salt Lake City, where she was raised.

As she describes it, “I come from a postmodern Western state formed out of the desert by utopian hands. Our valley bowl is marked by the same hand, divided and structured in a defined moment in an idealized grid. My brain is ingrained with this rigid grid; my subconscious can replicate its contours.

“I grew up in a primarily ‘social’ LDS family,” Leitch says. “We attended church, but there wasn’t intense indoctrination in the home, and I was free to pursue my own, often divergent ideas.”

Leitch has exhibited a number of installation works, most recently “Untitled Congregation” in April 2013 at Nox Contemporary, consisting of 6000 LDS Sacrament cups full of water, arranged on the floor of the gallery. Her fascination with Mormon symbology is due to its mix of the sacred and the mundane.

“I think I’ve always been influenced by the spaces of worship and LDS architecture in particular,” she says. “Regarding chapels, there is something about the proliferation of practical and somewhat mundane structures aiming for a higher purpose; I enjoy the dichotomy and intersection of the temporal and spiritual aspects.”

For “Untitled Apogee,” she uses fabric, string and video projections to create a topography of the area, suspended from the ceiling to create an inverted map of 617 steeples of the Mormon chapels and temples in the Salt Lake Valley, extended down to the floor.

“The title comes from a visualization of extending lines from the tips of church steeples seen throughout the valley and connecting them to a flexible atmosphere, defining a relationship of distance between the two planes,” Leitch says. “I imagine the points of origin, and their limits to have spacial, gravitational relationships like heavenly bodies. The lines are anchored to the base and weighted, further reducing the length of the apogee and increasing the surface area of the atmosphere. An inverted topography is then created, reversing the heavens and earth.”

Her body of work is remarkable in its unity of theme and style. This work is a continuation of a series that began with the piece “Untitled: Fielding,” in which she repurposed covers of used LDS priesthood manuals featuring a portrait of the bearded Joseph F. Smith that were headed to the recycle bin.

“That was the first piece which directly drew upon a specific relic of LDS material culture and re-appropriated it for aesthetic ends,” she recalls.

“Untitled Apogee” may have its closest parallel among Leitch’s other works in “Untitled Edifice,” in which she projected video of other pieces of LDS architecture, inverted and lowering themselves onto the facade of then Ephraim-based CUAC, itself a historic pioneer building.

She recalls the origin of “Untitled Apogee” from a very specific moment: “There was a particular instance a couple of years ago, while traveling around, observing the white steeples at the foci of every neighborhood; [it] elicited a visceral reaction that I knew I wanted to make a piece about.”

Her reaction, in a strange way, paralleled that of the early settlers: “This valley was chosen for its geography, it was planned and filled with ideals, as embodied in the structures of worship. I am mapping this out and making it a sculpture that can exist unto its own.”

Leitch had a very specific vision in mind when designing the piece. “I imagined the scaled mapping of the Salt Lake Valley fitting proportionally in the space. As in many of my other pieces, I am essentially connecting the ground plane to the ceiling, engaging the whole space as a field, allowing the viewer to circumambulate. The body of the viewer and its navigation of the space also informs the scale of the work.”
She believes her installations could add to residents’ understanding of their environs. “We live in this setting, and are familiar with the constructs around us. I want to heighten an awareness of the aesthetic potential of our circumstances.”

Upcoming works will look at different aspects of these issues. A May installation at the Salt Lake City Library, she says, will be exploring horizontality as opposed to verticality.

“As a whole, I think I’m still fleshing out this body of work and there are the seeds of new projects in the same vein still waiting to be realized.”