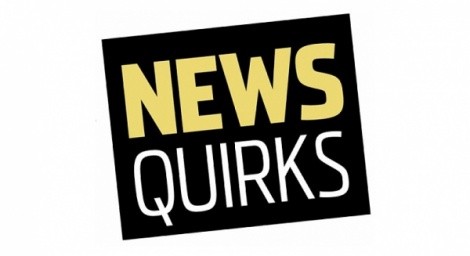 Curses, Foiled Again
Camden, N.J., police Sgt. Jeffrey Frett, 40, plotted an early retirement by having his wife meet him while on patrol to shoot him in the leg so he could claim he’d been the victim of a random shooting. The scheme unraveled after a plainclothes officer passed the couple and noticed the wife’s van. A few minutes later, the officer heard Frett’s voice over the police radio reporting he’d been shot, and then saw the van drive by. He gave chase and captured the “assailant.” Meanwhile, because her aim was off, she’d only shot Frett’s pants leg. Frett later pleaded guilty to making a false police report, lost his job and forfeited his pension. (Cherry Hill’s Courier-Post)

• Robert Williams was arrested after he applied to join the San Diego Police Department and answered yes to two questions on his application about having had sexual contact with a child and viewing child pornography. Police searched his car and apartment and confiscated computers and hard drives. Williams released a statement objecting to being arrested for “telling the truth during the hiring process,” and declared he “is seeking expert counsel, pro bono.” (San Diego’s KGTV-TV)

Stimulus Package
One consequence of the deadlier-than-usual tornado season in the United States has been record-breaking sales for the roughly 100 companies that sell safe rooms and storm shelters. Prices range from $3,000 for a concrete bunker to thousands of dollars for elaborate steel rooms. Not all shelters being sold, however, meet proper safety standards in a field that is largely unregulated, according to Ernst Kiesling, executive director of the National Storm Shelter Association. Noting “almost anyone can start up a shelter business and build shelters,” Kiesling said some shelters on the market are little more than septic tanks rigged to accommodate people or use materials so flimsy that a high wind can rip off the doors. (The New York Times)

Slightest Provocation
Authorities accused Ilona Sales, 62, of beating her younger sister at the home they share in Plainfield, Ill., when the two fought because they couldn’t agree whether to set the thermostat at 67 or 68. Will County Judge Brian Barrett found Sales not guilty because he couldn’t tell which of the sisters started the brawl. (Chicago Tribune)

• Police arrested brothers Jonathan R. Pippert, 32, and Jared J. Pippert, 27, at the home they share with their mother in Sheboygan, Wis., after they fought over a bottle of shampoo. The Pipperts agreed the fight began when Jonathan took the shampoo from Jared’s room while Jared was sleeping, but each insisted the other one threw the first punch. (Sheboygan Press)

• Karl Ludwig Eichner, 68, was arrested in Naples, Fla., after being accused of attacking a woman with his swim noodle and then punching her in the face because she threw his watermelon into the Gulf of Mexico. (Naples Daily News)

Definitionally Challenged
New York’s Court of Appeals ruled that Margaret Groninger couldn’t sue the village of Mamaroneck after she fell on ice in its parking lot because the village neither caused the ice nor received prior notice about it. In her appeal, Groninger noted that state law lists only six municipal locations requiring advance notice of defects: sidewalks, crosswalks, streets, highways, bridges and culverts. Four of the court’s judges said the village parking lot counts as a highway for “functional purpose,” while the three dissenting judges declared the statement to be so obviously untrue “as hardly to merit serious discussion.” (Associated Press)

Guilty Bystanders
After Raymond Zack, 53, walked into the ocean in Alameda, Calif., intent on killing himself, he stood up to his neck in the frigid surf 150 yards offshore for more than an hour while at least 10 police and firefighters stood on the shore, with about 75 beachgoers, watching until he eventually drowned. “We’re not trained to go into the water,” police Lt. Joe McNiff said. Fire Chief Ricci Zombeck, noting that budget constraints prevent the fire department from recertifying its firefighters in land-based water rescues, said, “If I were off duty, I would know what I would do,” but he added that his on-duty response was to stay “within our policies and procedures” to avoid opening the city to liability. Firefighters wouldn’t even go into the water to retrieve Zack’s body, instead waiting until a woman in her 20s volunteered to swim out and bring the body back to the beach. At a packed city council meeting after the incident, Alameda residents declared they had lost faith in their first responders. (San Francisco’s KGO-TV)

Culinary Adventures
Following the National Transportation Safety Board’s conclusion that Canada geese caused the forced landing of a U.S. Airways jet in the Hudson River by getting caught in its engine during takeoff, New York City announced plans to capture geese flocking around LaGuardia and Kennedy airports and send them to Pennsylvania to be cooked to feed the poor. “Rather than disposing of them in landfills, we wanted to make sure they do not go to waste,” an official of the city’s Department of Environmental Protection said. (Reuters)

•: Fifteen percent of British consumers responding to a survey admitted serving dinner guests food that had fallen on the floor, and 10 percent knowingly served them food well past its sell-by date. Another 13 percent said they had accidentally poisoned themselves and their guests with their cooking. According to the poll commissioned by Italian pasta maker Giovanni Rana, 5 percent of the respondents admitted defrosting food by using irons, hairdryers, tanning beds and other alternative heat-generating appliances. (Reuters)

When Guns Are Outlawed
A woman robbed a bank in Longmont, Colo., of an undisclosed amount of cash by threatening to infect the teller with AIDS if she didn’t hand over the money. Police official Jeff Satur said the woman, between 55 and 75, coughed frequently into a blue bandana during the holdup. (Reuters)

• When a 44-year-old man answered the door of his home in Stafford, Va., a man wielding a chain saw came at him. The resident went back inside and closed the door, but the man with the chain saw broke into the home and chased the resident, who defended himself with an aluminum baseball bat, hitting his attacker in the head and jabbing him in the midsection. The attacker fled but was later arrested and identified as Douglas Edward Turner, 31, according to Stafford Sheriff’s Maj. David Decatur, who explained the attacker was upset with the resident about a woman. (Fredericksburg Freelance-Star)