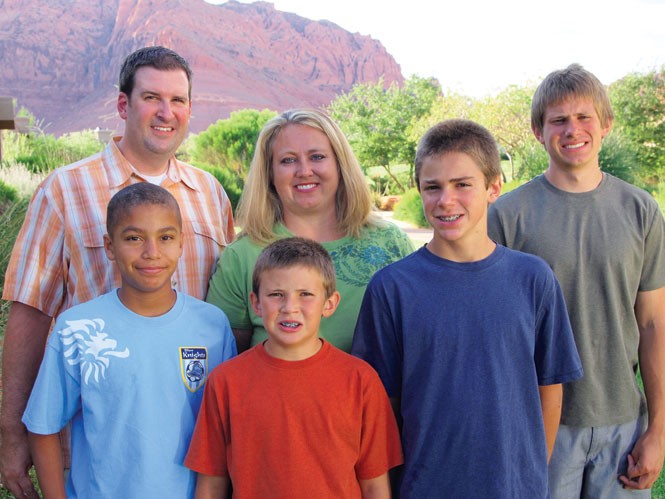 A stack of ratty street-urchin pants stands as a testament to Melissa Ford's school involvement.

Ford learned how to sew the pants when she helped design costumes for a Clayton Middle School production of Oliver!

"I probably made a hundred pairs of orphan pants," Ford says.

Ford, a mother of four who's campaigning to represent the east bench in District 6 of the Salt Lake City School Board, also has more experience in parent-teacher associations than you can shake a ruler at. And she says her involvement in the school system has helped her learn that small changes can make a big impact, including fostering a culture of involvement and success between students and parents.

Those orphan pants and other behind-the-scenes volunteer efforts, Ford says, helped the annual Clayton play become more than an average school production featuring a handful of students. In recent years, productions have included as much as half of the student body, which averages about 750 students annually, performing in The Little Mermaid, Joseph & the Amazing Technicolor Dreamcoat and others.

It's a simple way that students, parents and the community can get more involved and strengthen ties with one another, Ford says, and it's those kinds of efforts that she would prioritize if she were on the school board.

Ford is keeping her focus hyper-local, she says, unlike her opponent Weston Clark, a former chair of the Salt Lake County Democratic Party, who'd like to use the position to lobby the Legislature or other levels of government.

"It's not supposed to be about politics," Ford says "It's about the students."

Ford has been active in her four children's schools since she moved to Salt Lake City in 1999, when her husband's work brought him from Washington, D.C., to the Beehive State.

She says she first realized the value of school boards in the early 2000s, when the district sought to change the boundaries for the local elementary school but not the middle or high schools. It was a small move on the boundary map and would only have affected about 10 kids in Ford's neighborhood, but she thought it would be a negative for those kids—including her own—to have to say goodbye to their elementary school friends and make all new friends at the next grade.

So, Ford says, she gathered some signatures, told the district that the boundary shift wasn't fair, and the board agreed.

"Every thing I've done involved with the schools since then has been to give me the experience to serve on the school board effectively," Ford says.

And she's done plenty with schools in her district since then. She's served on the Bonneville Elementary Parent Teacher Association since 2000, including as vice president, and has been co-president of the Clayton Middle School Association since 2012. Since 2011, she's been active with the Salt Lake City School District Community Council for East High, which decides how to spend state trust-lands money, and has been the council's chairwoman since 2012. She also coordinates ski and snowboard trips every season for students from Bonneville Elementary School, is active in the East High Football Boosters Club and has also been involved in the Joint Educator Evaluation Committee.

Having kids in the school system has helped her stay passionate about education, and so have the perks of being active in the community, she says—like the salary paid out in smiles and high-fives from elementary school kids.

Ford has strong opinions about the Common Core, citing a fondness for benchmark standards while also not being crazy about penning in how teachers instruct their classrooms, but says she's realistic about what she and the board could do about it.

"Like it or not, I don't feel like as a board member, I would be able to change the fact that Utah has adopted the Common Core," Ford says in a statement on her website. "But the school board should and will influence the actual curriculum that is being taught to ensure that all students reach the benchmarks of the Common Core."

But Ford says that being realistic about impact doesn't mean that anyone's throwing up their hands—her recent experience with Clayton Middle School, she says, is an example of how simple programs can have ripple effects in the community.

When Ford came on as co-president of the Clayton Middle School PTA, she says, the association's budget was about $11. There wasn't even money enough for a fundraiser, so she helped roll out a Cash for Clayton campaign that told parents that if every one of them donated $20, the association would have more than enough to provide services.

The simple campaign garnered roughly $12,000 that was then able to help fund service efforts, like a Christmas store for students with disabilities and a Community Caring program to stop bullying and promote inclusiveness in the school. Money also went to support the annual school play that includes more than 300 students acting, singing in the choir and helping in other roles.

The annual production, Ford says, is a perfect example of a program that's helped promote a culture of involvement. The play helps students who might not otherwise be performers get out of their shells and gain confidence, Ford says, and also involves the community. The play often has more than 100 volunteers—and not just parents, Ford says, but also those who are simply active in local theater and arts.

Ford says that parents can also get involved in small ways that can have a ripple effect. She's an advocate of registration forms that offer a variety of volunteer options for parents, whether larger responsibilities like supporting the play or simply committing to one hour a year. Starting somewhere with volunteering is the perfect way to help parents get more involved with their students' academic life, she says.

Ford's seen this all firsthand, and says that one of her favorite memories from her children's education is when her son played King Trident in the Clayton Middle School production of The Little Mermaid. It brought her otherwise reserved and somewhat shy son out of his shell, she says, showed how much a community can do for their children, and also reminded her of where home is.

"I've been here in Salt Lake City only 14 years," Ford says. "I didn't grow up here, I didn't go to high school here. I wasn't connected before, but this is my home now ... because of that involvement."