Streaming makes music easy. That's how it should be 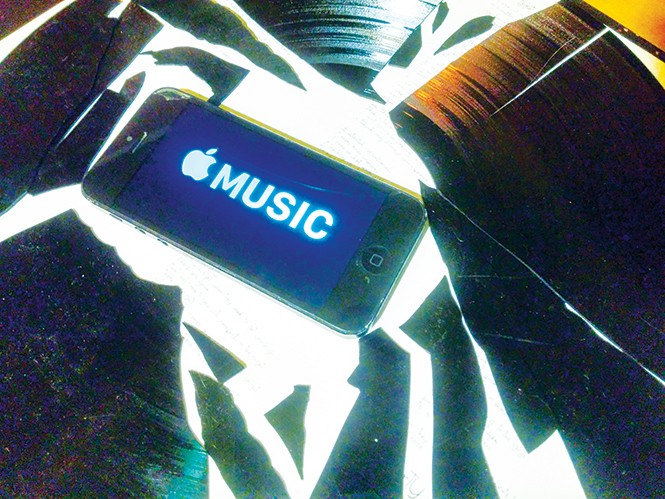 To understand where I'm at with vinyl, you have to understand a 1966 British movie called The Family Way. I've never seen it. That's not important.

What is important is some enterprising producer of the film decided to release its soundtrack with Paul McCartney's name prominently emblazoned across the album cover, ensuring the Beatle member's name would prompt a few extra purchases of what turns out to be a purely instrumental soundtrack. McCartney sings nary a note.

I can assure you—the trick works. At the 2015 Record Store Day in April, among the exclusive 7-inch singles and limited-edition picture disc pressings, I found The Family Way, once again touting McCartney's name in bold letters. But this time, on the back, it had that extra sprinkle of legitimacy: "Limited Collector's Edition."

That distinction has sharpened for me in the past few months. I, like many others, signed up for the free three-month trial for Apple Music, the new streaming service that lets you listen to Apple's music library for a monthly subscription. Now that my trial is almost up, I've quickly discovered how easy it is to discover new artists, to finally listen to that one album I've been curious about but never brave enough to buy. It's easy. I somehow forgot discovering music should be easy.

Apple Music costs $10 a month. So does Spotify Google Play Music. So does the cheapest version of Tidal. Amazon Prime's yearly subscription averages $8.33 a month. Either option is dramatically less expensive than buying vinyl, which—according to the RIAA—averaged $23.84 per record in 2014. That is unsustainable for the average music lover.

Yes, I get it. It feels nice to buy vinyl. All that stuff people say about it being fun to hold the art in your hands, to physically drop the needle onto the record and hear what's engraved on it? All true. You experience the music, right?

Well, here's another experience. A few weeks ago, I saw a picture of Billy Corgan glumly riding a train ride at Disneyland. I laughed, shared it on Facebook with my older brother, who first introduced me to the Smashing Pumpkins, and then got on my Apple Music app and listened to Mellon Collie and the Infinite Sadness for the first time in probably 20 years. It was one of the most enjoyable album experiences I've had in a while. So, yeah. I stream music now. I'm not ashamed to say so.

And maybe you don't have a smartphone. Maybe you still buy CDs or cassettes. Maybe you honestly, truly, deeply cannot part with vinyl. That's fine. What I'm really railing against is music classism—a perverted idea that your tastes are somehow more legitimate because of the piece of technology attached to your headphones. That's a really stressful way to listen to music.

A wall full of records is still cool. If you can afford it, collect away. But let's stop pretending that every music lover has the money it would take to make that happen. The rest of us are just trying to listen to as much as we can because that's what we love to do. We don't need a wax trophy to prove it.