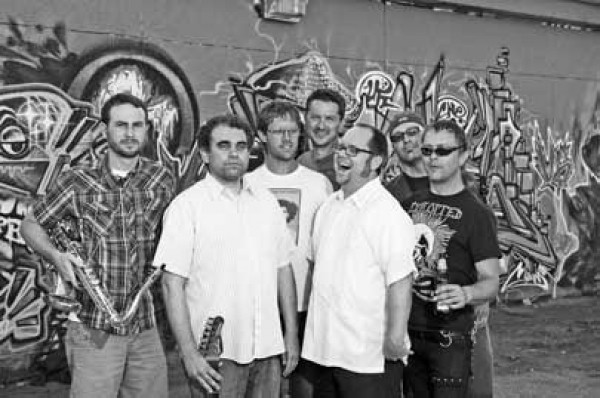 A little over 20 years ago, Provo was endearingly called “The Ska Capitol of Utah”—and its renown in the genre extended nationwide. Scooters and two-tone were abundant in Happy Valley, and the music wasn’t only a popular genre at the time, but a “wholesome” excuse to be rude boys and girls skankin’ to the beat.

As many of us 30- and 40-somethings remember, two bands, Stretch Armstrong and Swim Herschel Swim, dominated the scene. They haven’t played together since the ’90s, so this weekend’s reunion show will be nostalgic for old fans and, of course, the bands, but will also hopefully lure a new, younger ska audience to enjoy the energetic, horn-laden, bouncy shenanigans.

Both bands had insane followings for local acts, and many hearts were broken when each split up. Swim Herschel Swim disbanded in 1993, and Stretch Armstrong broke up in 1997; both were at the height of their respective musical careers. It was the first huge wave of Utah County music getting big, and many fans hoped they would sign with a major label and become famous, like many of the acts they had opened for—the likes of Special Beat, Fishbone, The Mighty Mighty Bosstones and No Doubt.

It was a difficult, but necessary, transition, says Stretch Armstrong’s lead vocalist, Scott Van Wagenen. “Sometimes I regret it, but I was not meant to be a touring person,” he says. “Many of us were getting married and starting families. Some band members wanted to take it further, and others were happy with the success we’d had and were ready to move on.”

Stretch Armstrong got its start in 1990; after the founding members moved from San Diego, they were quickly inspired by Swim Herschel Swim. “We knew we needed to introduce Provo to another ska band,” Van Wagenen says.

As time went on, they also took on several new names—Stretch and Stretch Magnifico, among others—as the result of a lawyer’s advice to avoid any lawsuits from the company that made the Stretch Armstrong action figure, from which the band took its name, Van Wagenen says.

They slowly built their catalogue from Fishbone, The English Beat, Joe Jackson and The Jam covers to include three LPs and one EP. From the early material, it’s easy to hear strains of Elvis Costello—whom Van Wagenen cites as his primary influence.

It was always a kick in the pants to dance to Dan Nelson, Sterling Acomb and Brian Rowley’s fun, sharp horns, bassist Darren Hutchison’s animated playing and Van Wagenen’s campy dance moves as he wore his signature pork-pie hat. If there were a symbol of ska, it was that fedora-like hat. If there were a dance, it was the skank—which looked like you were picking up coins while running in place. Ah, the good ol’ days, when life was easy.

Swim Herschel Swim was ska punk to Stretch Armstrong’s jocular ska pop. Swim’s slightly darker, more biting lyrics had fans hooked and inspired pits for skanking and/or slam dancing. If you don’t remember the jump-to-try-and-hit-your-head-on-the-ceiling-inducing “Shut Up,” listen to it again. This sonic testament embodied the movement. But, alas, it couldn’t continue.

Members of both groups went on with their lives, and now enjoy “everything from still playing music in other projects to making beer to making TV commercials,” Van Wagenen says.

Now that both bands have had a 15- to 20-year break, they’re probably well-rested and ready to give it everything they have to reignite that early Utah County ska scene, if only for one night. Fans can expect the classics and, perhaps, a few surprises.

“Stretch Armstrong will play songs from every release we had,” Van Wegenen says. “Some of those songs we haven’t played in 15 years, so we are excited to see how they turn out.”Â