An artist and his subject collide in Final Portrait. 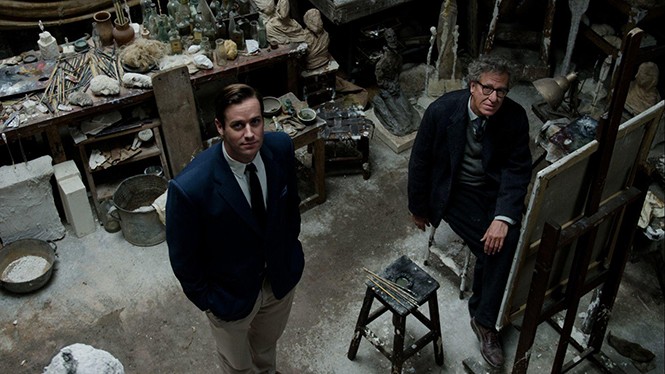 In 1964 Paris, Swiss artist Alberto Giacometti (Geoffrey Rush) invites a friend, American journalist James Lord (Armie Hammer), to sit for a portrait. Lord is about to fly home to New York in a few days, but Giacometti promises that this favor to him will require "two to three hours, an afternoon at the most."

Spoiler (not really): It takes quite a bit longer than that.

Writer-director Stanley Tucci's, well, portrait of how friendship is tested between the always irascible Giacometti and the usually unflappable Lord begins as a bleakly funny gloss on the clichés of temperamental creative genius. Rush is a crotchety delight as the self-described "neurotic" artist who proclaims that portraiture is "meaningless ... and impossible" (even as he engages in the form) since photography became a thing, and despairs that his work is never finished, even stuff that he's shown publicly. Both director and actor play the artist's self-doubt, even at this late stage of a hugely successful career, as part of the bitter humor; Rush's constant anguished refrain of "Oh fuck!" as he sits at the easel is funnier than it has any right to be.

But there's also sly irony: Any creative person, no matter how successful—including, I am certain, Tucci and Rush themselves—can give in to insecurity about their own talents. And ifPortraitdoesn't have a lot of sympathy for Giacometti and his wildly swinging moods, it certainly has a touch of self-deprecation to it. Among other of the film's aspects, the grays of its palette, echoing the clay of Giacometti's studio and the paints of his pallet, seem to speak to a certain misery of spirit.

The near-farce ofPortrait's first half, though, slowly morphs into something almost genteelly warped. The artist reveals some startling violent fantasies to Lord, while Lord—suffering from the "physical and psychological strain" of posing—seems to become infected with Giacometti's capriciousness and cruelty. Is his art worth the pain he inflicts on everyone around him? His wife, Annette Arm (Sylvie Testud), takes the brunt of it, as he ignores her in favor of his prostitute mistress, Caroline (Clémence Poésy). Only his brother, Diego (Tony Shalhoub) seems immune—but then again, he's another artist. Is his art worth his subject turning on the people waiting for him back in New York? As Lord postpones his flight again and again, his calls home to announce the delays become increasingly unpleasant to the unseen and unheard significant other on the telephone, as he defends the notion that the art must take priority over everything else.

Must it, though? It's left to you to make that decision. We see the portrait of Lord taking shape throughmanyiterations here, and you can see the actual painting atthe website for Christie's auction house, which says it's "among the best known of [Giacometti's] works on canvas." You can read the memoir Lord wrote about this experience, which surely influenced—but is not the sole source for—Tucci's script. Perhaps Tucci's uniquely cinematic take on this singular moment in the artist's history—one of his last works before his death in 1966—will help you decide.

Tucci's script might almost work as a mostly two-man stage play, but how he deploys the camera's perspective could only be done on film. The camera gets so close to Hammer's unnaturally still face as he poses, but this isn't a replication of human intimacy, as a filmic close-up usually represents: Rush's Giacometti is sitting across the studio and doesn't have this view of his subject—at least not visually. As the painter translates what he sees into impressionistic brushstrokes on the canvas, Tucci's eye—wielded by cinematographer Danny Cohen's camera—is Giacometti's imaginary one. "You have the head of a brute," he tells his subject. (The handsome Hammer, not a bad stand-in for the handsome Lord, doesn't look like a brute to us.) But Lord also shouldn't worry about this because "I'll never be able to paint you as I see you." What value does his interpretation of Lord have, then?

The eternal question of all art, then, is here inFinal Portrait: What's itfor? What does itmean? Does it mean anything at all? Wisely, Tucci declines to presume he has all the answers.