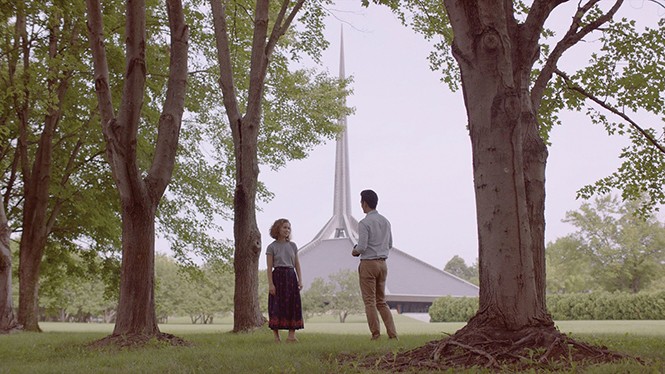 "I was going for something subtle," 20-year-old Casey (Haley Lu Richardson) says to her mother (Michelle Forbes) early in the quietly masterful drama Columbus. She's talking about a recipe she's made for dinner, but it's hard not to smile a little at whether writer/director Kogonada—a critic and video essayist—is taking a little poke at likely reactions to his debut feature.

Because Columbus is the kind of movie that will never inspire a must-watch reaction in somebody who asks, "What's it about?" You could tell them that it's about an unlikely friendship between two very different people, and maybe you'd get a flicker of interest. Then you'd say it's also about the improbable wealth of modernist architecture in the small Indiana town of Columbus, and just wait for their face to go blank.

Columbus is nominally about those things, but the "what"—as is the case in any great work of art—is infinitely less important than the "how." It's a masterwork of cinematic composition that's also a profoundly human narrative. Like the study of architecture itself, it's not just about cold structures, but about the way those structures tell a story, and provide a shape to the people who move within them.

At the center are Casey and Jin (John Cho), who meet under unexpected circumstances. Casey, a year removed from graduating high school in Columbus, works in the local I.M. Pei-designed public library, putting off her own life and her fascination with studying architecture to keep an eye on her mother, a recovering meth addict. Jin has arrived to attend to his estranged father, a renowned Korean scholar of architecture who collapsed and fell into a coma on the eve of a lecture there.

On a superficial level, it seems that Casey and Jin might bond over their respective parent issues, and indeed both of them are—consciously or unconsciously—looking for someone to talk to about their frustrations. But Kogonada repeatedly complicates their interactions, whether through Jin's curt manner or simply through the manner in which he films them together—often separated by fences, or placed on opposite sides of the picture. Forming connections isn't easy for these two people, and Columbus repeatedly finds the placement of characters in the frame accentuating their isolation, especially when Kogonada shoots Jin reflected in mirrors for entire scenes.

If that all sounds chilly and remote, nothing could be further from the truth. Kogonada anchors Columbus in the two central performances, and while Cho is good as Jin—particularly in awkward scenes with his father's colleague, Eleanor (Parker Posey), for whom he has long carried a torch—Richardson is a revelation. She radiates an intelligence that's also edgy and insecure, reacting defensively when her co-worker Gabriel (Rory Culkin) comments about her lack of college education. Whether she's speaking or simply contemplating a favorite building, there are layers built into every look.

Kogonada captures this quality in her work most beautifully in one of the most breathtaking pieces of directing you'll see all year. As Casey and Jin talk about one Columbus landmark, he catches her lapsing into docent-speak, and pushes her to speak from her heart about why the place moves her. Kogonada cuts to inside the building, looking outward through the glass at Casey; we're unable to hear her speak, only watching her face as she begins to explain something about which she feels passionately. Richardson's performance is stunning, thanks in part to a director who knows how to capture her in repose, and just as well when she dances, furiously and drunkenly, in front of a car's headlights.

There's another self-aware moment in Columbus, as Gabriel explains to Casey something he had read about attention span, and how an inability to pay attention to something—whether it's a book, a video game or a movie—is more about interest in that thing than about an inherent character flaw in the observer. Maybe it's a nod by a filmmaker to the reality that a movie about two people sharing a brief connection in a city of magnificent buildings isn't going to be everyone's cup of tea. It's a tale of personal uncertainty set in a world of monuments to solidity. There's an ocean of beautiful humanity there, if you're comfortable with a movie that's going for something subtle.