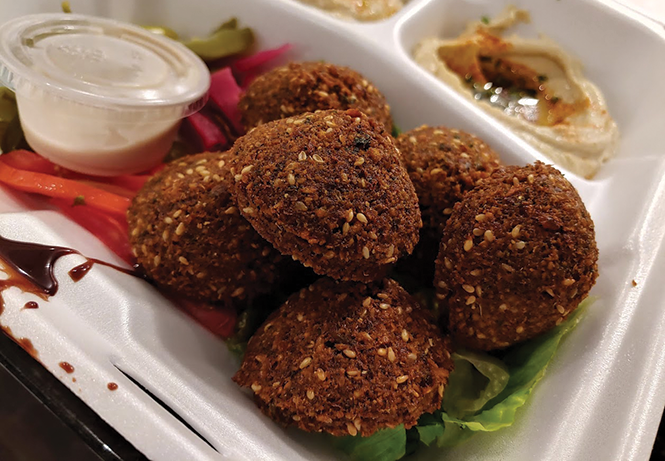 It seems fitting that, after extolling the experimental virtues of West Valley City in last week's issue, I would stumble upon Beirut Café (1326 E. 5600 South, 801-679-1688, beirutcafe.com) on the other side of the valley. Nestled deep in a sleepy Cottonwood suburb, this fast-casual Lebanese restaurant that shares a space with a Farr's Ice Cream shop is one of the most unexpectedly charming developments on the East Side. For the past year, Beirut Café has been serving up Lebanese and other Middle Eastern favorites for the neighborhood, and its proximity to an ice cream shop means there's no stopping you from buying a scoop to put on top of your baklava.

Beirut Café opened as part of Sunburst Car Wash and Food Mart's recent renaissance—the new digs are most impressive. As family and community are deep within the DNA of Lebanese food, this quaint spot feels like a perfect fit for Beirut Café. It's near businesses that generate lots of foot traffic, and its proximity to Cottonwood High School makes it a perfect destination for extracurricular dining—and a perfect hideout for students who feel like cutting class.

With casual neighborhood traffic making up a good portion of Beirut Café's business, its menu is packed with grab and go options like the chicken or beef shawarma ($7.49). A peek behind the counter reveals the signature stack of skewered meat luxuriating in the heat of a vertical rotisserie. This is the key to any good shawarma, and your order comes freshly sliced from this hypnotic cone of slow-roasted meat. There's no clear winner between the beef or chicken—I'd go as far as to suggest the chicken for lunch and the beef for dinner, but one should always listen to their heart when it comes to shawarma.

For those after more of a sit-down meal, the mixed grill ($15.99) and the falafel plate ($12.99) go very nicely with an order of baba ghanouj ($4.99). The Lebanese penchant for herbs and spices takes front and center with the skewers of chicken, lamb and slightly spicy kafta served on top of rice and grilled onions. Again, it's very difficult to determine which protein is the MVP, since they're all so lovely. The grilled chicken can be a bit dry at times, but the flavors it gets from its pre-grill service are just right. Lamb always brings more natural flavors to the table, and the ground beef mixture known as kafta is a tasty mix between a sausage and a meatball—let's just say it's a good thing they offer all three on the same plate so you don't have to choose.

The falafel plate at Beirut is solid—nothing spectacular, but exactly what you want when you're craving those yummy, deep-fried medallions of chickpea heaven. I did think the use of sesame seeds in the falafel's crispy exterior was a good call—they add a bit of extra nuttiness to the starchy dish. I found that ordering the falafel plate along with the baba ghanouj was a good way to experience Beirut's Lebanese dip game, since the falafel comes with hummus and a tahini sauce. I had a great time breaking the falafel in half and coating each bite with something different.

Hummus and baba ghanouj are strong indicators of a Middle Eastern joint's grasp of flavor and texture, and the Beirut team knows exactly what they're doing. Their hummus is on the creamier side and a bit heavy with its garlicky flavor, both of which I really like. The baba ghanouj—a blend of smoked eggplant, tahini, olive oil and lemon juice—is also silky smooth, and doesn't skimp on the tart aftertaste imparted by the lemon.

One misfire on my visit was the meat pie ($4.99), a pizza-like flatbread topped with tomatoes and a seasoned mix of finely ground beef and lamb. The meat topping was overwhelmingly monotone, and the tomatoes didn't quite manage to spruce up the flavors. It's something I'd be willing to try again, but I feel like the spinach and cheese pie ($5.99) is the way to go here.

Regardless of the entrée you get at Beirut Café, you really shouldn't leave without a piece of homemade baklava ($2.99). It's got just the right consistency, and it has a lovely burnt caramel finish on top of the traditional flavors of pistachios and syrup. If you're after a more regal dessert, the cheese kunafa ($4.99) will not disappoint. It's a sticky mix of cheese-filled phyllo dough that has been soaked in syrup hit with rose water and orange blossom, and topped with pistachios.

Visiting a place like Beirut Café is one of the absolute pleasures of covering the local food scene. Not only does the food deliver, but it's always fun to see an established community get a culinary jolt from far beyond its borders.