Utahns are looking for the sweet life

As we sit outside on a bar patio in downtown Salt Lake City in mid-July, Ron’s wedding band keeps a rhythm as he taps his fingers against his glass of Diet Coke. Staring down at his drink, he struggles to explain why he’s been cheating on his wife of 30 years.

Ron (not his real name), who’s in his early 60s, owns a local business, from which he says he makes roughly $300,000 a year, and currently dates a pair of sisters in their early 20s. He is what popular culture has dubbed a sugar daddy, and here in Utah, Ron is not a singularity. In fact, the sugar industry is booming in Utah.

We don’t always like to talk about it, but it’s tough to ignore the fact that money, power and sex have always been in bed together, even in a place like Zion. Think back to the 1983 film Scarface, when Al Pacino’s character, Tony Montana, said, “In this country, you gotta make the money first. Then when you get the money, you get the power, then you get the women.”

You can call it whatever you want: a mutually beneficial arrangement, friends with benefits or even prostitution. A sugar-daddy relationship is, at its core, fundamentally simple. Typically, a lonely guy will meet a young woman on a website (like SeekingArrangement.com) and arrange to meet in a public place. There, they’ll discuss how much money the “sugar baby” expects for an allowance. If they like each other, they’ll go on dates and, in the end, the woman is financially stable and Mr. Moneybags gets companionship and, usually, discreet sex.

“It’s prostitution just as much as being married is prostitution,” argues Ron. “If a woman is married, isn’t working and is being supported by her husband, there’s a trade-off. A long-term arrangement with a mistress isn’t a lot different than a marriage, except you don’t fight as much.”

Believe it or not, Ron’s feelings on monogamy are actually pretty normal. “That’s what men are hard-wired to do. They’re genetically hard-wired to get their seed out to as many places as they can,” says Gary Klein,* a Salt Lake City clinical social worker and licensed therapist. “Now, that doesn’t mean it’s OK to get married and fool around; I’m not saying that at all. But I will say I think that lifelong monogamy is unnatural. I don’t think humans are designed for that, and there’s a fair amount of research that backs that up. It’s a societal-imposed institution.”

Ron has a more direct take: “Let me put it this way,” he says, leaning across the table, “if you can fuck it, fly it or float it—rent it, don’t buy it.”

Ron’s been dating his two sugar babies for almost a year now. He buys them gifts, dinners, a foreign car and gives them an allowance of $24,000 a year ($12,000 each). In return, he dates each sister—separately—a couple of times a month.

To the average person who doesn’t pay for sex, $24,000 is an insane amount of money. So why purchase something that people can get for free? For sugar daddies, it’s not so much about the sex as it is the power.

“Men who are economically or politically powerful are often interested in engaging in these kinds of sexual-exchange relationships,” says Elizabeth Clement, an associate professor of history at the University of Utah. Clement’s book Love For Sale focuses on turn-of-the-century prostitution and how American’s views on morality and sexuality have changed over time. “They don’t just want to have a wife; they want to have a wife and a mistress. It’s not like powerful men couldn’t get sex for free, but there’s something that they like about the encounter. Perhaps … expressing sexuality through money.”

For Clement, these types of relationships aren’t surprising. “Men are attracted to the physical attributes of youth. And women are attracted to power—and in particular, economic power,” she says. “What makes [sugar daddies in Utah] different is how invested they are in keeping it from their wives while maintaining this facade of respectability within the church and politically. There’s a cost to having a mistress here in Utah that you may not see in other places.” 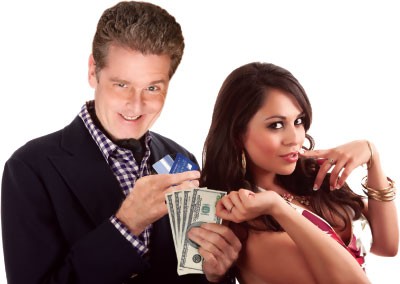 “It’s not surprising the states that are the most religious are also high in categories like this. It makes perfect sense,” Klein says. “Carl Jung once said, ‘The greater the illumination that shines on someone, the darker the shadow is cast.’ ”

Wade heads up a modern-day sugar empire and is a firm believer in his own work. In addition to SeekingArrangement, he owns two other websites of a similar nature and has written two books, one on “sugar dating” and the other on networking with the wealthy. His real name is actually Brandon Wey—Wade is a pseudonym. “It’s not legally changed, but when I started SeekingArrangement I wanted a more Hugh Heffnerish name,” he says.

Wade created the site in 2006, initially for his own use after a string of bad luck with typical online-dating sites. “I saw that there was a problem. Very attractive woman were getting bombarded [with messages] by all these men, and that’s where the idea for SeekingArrangement came about. I wanted a website where there would be more women than men. So, on SA the men pay and the women join for free. There’s roughly 10 girls to every guy on my website.”

In the past couple of years, the 42-year-old entrepreneur has appeared on shows such as Dr. Phil, 20/20 and Dr. Drew and is extremely comfortable defending attacks against the morality of his website. “Listen, wealthy men like Donald Trump, they’ve protected themselves over the years with prenuptial agreements, and I believe that when a couple meets for the first time, they ought to discuss everything in sort of an agreement form. You should really talk about what you can offer and what you expect if things don’t work out. When this happens, then the relationship goes extremely well. You don’t have the feeling of being ripped off or lied to or cheated on.”

In February 2012, Wade officially retired from the sugar-daddy life and married a sugar baby he’d met via SeekingArrangement.