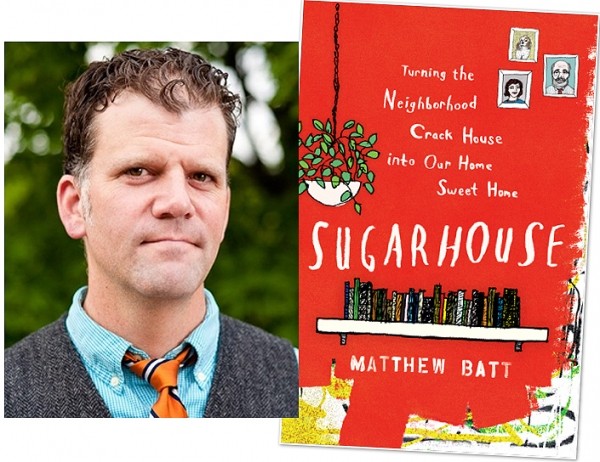 The subtitle on the cover of Matthew Batt’s memoir, Sugarhouse, reads “Turning the Neighborhood Crack House into Our Home Sweet Home.” His publisher’s attorneys might prefer that you think of the term metaphorically rather than literally.

“I’m pretty confident that if anything went on,” Batt said by phone from his home in Minnesota, “it was more a recreational crack house than an industrial lab or anything. … It had more to do with the way the previous tenants and/or owners lived—with aluminum foil over the windows and a lovely array of unfortunate-looking vehicles in front of it.”

The house in question is in the Sugar House neighborhood of Salt Lake City, where Batt was a doctoral student at the University of Utah from 2001 to 2006. Sugarhouse chronicles the efforts by Batt and his wife, Jenae, to rehabilitate the run-down property they bought as their first home in summer 2002—and does so with a hilarious perspective on the virgin do-it-yourself fixer-upper experience for an academic more comfortable with dangling modifiers than hanging drywall.

For instance, here’s Batt in Sugarhouse on trying to select carpeting: “Monsanto, I think. Mohawk. Good, strong names. Like scouts in a James Fenimore Cooper Novel. Berber? No. It makes my mouth feel regrettable. Also rhymes with Gerber, which is baby food, which you don’t want to walk on barefoot. Stainmaster? Yes. You bet your ass I want carpet that has an advanced degree in something.”

The book started as a stand-alone essay—about visiting a workshop on hardwood flooring in Sandy—that emerged from an assignment in one of Batt’s U of U creative-writing classes, right as he was in the middle of the renovations. “I’d foolishly volunteered to be one of the earlier contributors in the [class],” Batt recalls. “Literally the day before something was due, I had to shove tools off my desk to find room for my laptop.”

What began as a simple, light-hearted look at the adventures of first-time home ownership, however, evolved into a more substantive memoir. At around the same time Matt and Jenae were working on their home, Matt’s family was undergoing emotional turmoil: the death of his grandmother; health issues facing his mother and grandfather; and the realization by Matt that his now-widowed grandfather—the significant father figure in his life—had been having extramarital affairs for years.

The overlapping of those events allowed for a unique perspective that makes Sugarhouse a perceptive look at confronting an “I’m an adult now” milestone at the moment you’re realizing the human imperfections in your family members. “I think there’s something about buying a house that’s ultimately so different than renting,” Batt says. “When you really dig in financially and physically, and invest in a property, it suddenly becomes really clear that you have a responsibility far greater than a place to put your beer and nap. … It makes you more mindful of the places you’ve lived, and where you grew up, and that ultimately leads to a greater understanding of all the sacrifices the people before you made so you could live in a safe, comfortable place. It’s something I had never really thought of before.”

The process of writing about these experiences involved the challenges of writing about the intensely personal experiences of friends and family members—divorces, revelations of infidelity—as well as poking fun at personality foibles. Those potentially awkward revelations weren’t something Batt was necessarily concerned about while the book was just a project in a word processor. “[For a first-time writer], the prospect of actually getting a book into the world is so astronomically difficult, it gave me permission to write as honestly as I could,” Batt says. “When it became clearer that I had an agent and a publisher interested, I started to get a little nervous. … I used my wife as my conscience.”

Wisconsin-native Batt and his family—he and his wife have since had a son—now live in St. Paul, Minn., allowing the author a perspective on what was unique about diving into the renovation process in Utah. “Everywhere you look,” Batt says, “there’s that brave, pioneer spirit: ‘Yes is the answer; now what’s the question?’ … It’s the intersection of a really wondrous landscape and brave, but also loving and supportive, people.”

Now that the experience of writing Sugarhouse is in the rearview mirror, Batt is able to recognize how the writing process itself changed the way he thinks about the events he went through. “In so many ways, I would recommend that everybody write a memoir,” Batt says. “It really is so edifying in terms of your self-knowledge and knowledge of the story of your life.