The Gateway Mall, 90 S. 400 West, 456-0000
Visit Salt Lake City’s only downtown mall not under construction with stores such as Abercrombie & Fitch, Bebe, Bastile and more. Restaurants such as Happy Sumo, California Pizza Kitchen and Fleming’s Prime Steak House provide sustenance before you watch a movie at the MegaPlex Theater.

Trolley Square, 602 E. 500 South, 521-9877
Originally built in 1908, Trolley Square’s historic architecture is undergoing a $60 million facelift that includes a 53,000-square-foot building for Whole Foods Market. Trolley Square has about 45 retailers but could increase to 65 when the renovations are complete. A Utah Historic Site, the mall is listed on the National Register of Historic Places.

Downtown Antique District located on Broadway (300 South) between 200 East and 400 East
Outfit your life with eclectic and bohemian finds from antique stores and art galleries, as well as indie-operated clothing, book and music shops along these bustling streets.

Downtown Attractions
Cathedral of the Madeleine 331 E. South Temple, 328-8941
Celebrating its 100th birthday this year, this wonderful Catholic cathedral has been restored to its original splendor, complete with magnificent stained-glass windows and elaborate artwork. Enjoy free tours and concerts.

Gilgal Garden, 749 E. 500 South
Hidden in the middle of the city, Gilgal is known for its eccentric handcrafted stone art. There is a 25-ton sphinx with the visage of LDS Church founder Joseph Smith, depictions of biblical stories and a tribute to Masons.

Pioneer Memorial Museum, 300 N. Main, 532-6479
Operated by the Daughters of Utah Pioneers, this museum features memorabilia from when the earliest settlers entered the Great Salt Lake Valley until the joining of the railroads at Promontory Point, Utah, on May 10, 1869.

Museum Of Church History And Art, 45 N. West Temple, 240-3310
Historical exhibits about The Church of Jesus Christ of Latter-day Saints and artwork by LDS artists.

Salt Lake Art Center, 20 S. West Temple, 328.4201
While not a museum, this art center has been around for more than 75 years, is housed in a beautiful downtown facility next to Abravanel Hall and is a must-see for those who crave contemporary visualart, especially large-scale avant-garde exhibits.

Attractions Around Town
Sugar House District, 1100 East & 2100 South
As depressing as it may be to pass by the gaping hole that was once housed local hangouts such as Sugarhouse Coffee and Orion’s Music, the Sugarhouse district is still jam-packed with local businesses to support including Solissa, The Soup Kitchen, 11th Street Tattoo Gallery, The Record Collector and a slew of others. 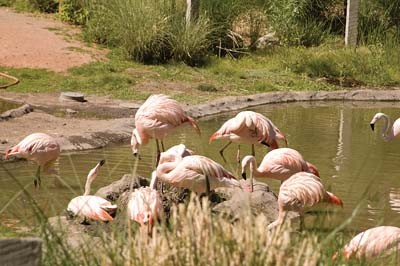 Living Planet Aquarium, 725 E. 10600 South, 355-3474
100 animal species are on display in the Marine Hall and Utah Waters Hall exhibits that include a bio-facts station, coral reefs, a shark tank and a “touch pool.”

This Is The Place Heritage Park, 2601 Sunnyside Avenue, 582-1847
Site of the Mormon pioneers’ entry into the Salt Lake Valley, the park features Old Deseret Village, This Is the Place monument, the Brigham Young Forest Farmhouse and picnic areas.

Wheeler Historic Farm, 6351 S. 900 East, 264-2241
Historic demonstrations and exhibits take you back in time. Discover the old-time farm lifestyle, once common for most families in Utah, but now largely past and gone.

Day Trips
Antelope Island, Syracuse exit on I-15 north of Salt Lake City
Hikers, horseback riders and crosscountry skiers enjoy a variety of trails on the popular island in the Great Salt Lake. Picnicking, camping, and boating facilities are also available. The island is home to a roaming herd of 600 bison, pronghorn antelope and bighorn sheep. A visitor center offers information on the island’s unique biology, geology and history.

Ogden Union Station, 2501 Wall Ave., Ogden, 801-393-9886
Built in 1924, Ogden Union Station was the center of transcontinental rail traffic for more than 50 years. Today, it is home to train and art museums, a visitors’ center, model train shop, and a restaurant.

Olympic Park, 3000 Bear Hollow Drive, Park City, 435-658-4206
The 389-acre Utah Olympic Park was built for the 2002 Winter Games for Nordic jumping and the sliding sports of bobsled, luge and skeleton. Now used for national and international competitions, it also serves as a year-round training ground for development and highperformance athletes. Visitors can tour the Alf Engen Ski Museum and take a bobsled ride of their own.