Stay inside: Here's 20 new and returning shows for the hot months 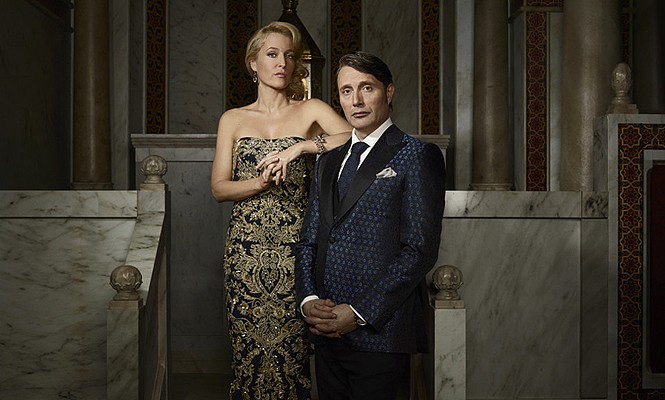 Hannibal (NBC; Thursday, June 4) Season Premiere: Hannibal (Mads Mikkelsen) and Bedelia (Gillian Anderson) are hiding out in Europe—but can the doctor keep his "tastes" under the radar? What a bore that show would be. (In Utah, Saturday, June 6 on CW30.)

Sense8 (Netflix; Friday, June 5) Series Debut: The Wachowski siblings bring their Matrix-y weirdness to TV in the tale of eight people around the world who can tap into each other's existences. Coincidentally, they're all ridiculously good-looking.

Orange Is the New Black (Netflix; Friday, June 12) Season Premiere: The gang's all back—and so is Alex (Laura Prepon), as well as new inmate Stella (Ruby Rose). Larry (Jason Biggs), not so much. Please contain your indifference.

Dark Matter (Syfy; Friday, June 12) Series Debut: The crew of an adrift spaceship wakes up with no memories, and to outside threats galore. Based on the Dark Horse graphic novel (woo!) and produced by the Stargate SG-1 team (uh-oh).

Proof (TNT; Tuesday, June 16) Series Debut: A brilliant but troubled surgeon (Jennifer Beals) is hired by a dying tech billionaire (Matthew Modine) to find proof—get it?—that death is not the end. TNT, maybe, but not death.

The Astronaut Wives Club (ABC; Thursday, June 18) Series Debut: Imagine Mad Men, but focused on the spouses of NASA heroes of the late '60s. That would be a better show than this reheated network leftover, but the fashion is sooo cute!

Complications (USA; Thursday, June 18) Series Debut: A suburban doctor (Jason O'Mara) becomes embroiled in a gang war after saving the life of a kingpin's son at a drive-by. From the creators of Burn Notice, so expect plenty of yelling and gunplay.

Mr. Robot (USA; Wednesday, June 24) Series Debut: Vigilante hacker by night/corporate IT drone by day Elliot (Rami Malek) is recruited by the mysterious "Mr. Robot" (Christian Slater) to e-destroy the company he works for. Never give up on TV, Slater.

Humans (AMC; Sunday, June 28) Series Debut: In the "parallel present" of suburban London, the must-have accessory is a "Synth," a human-like servant/friend. But what happens when the Synths develop emotions? And, since they're British, how do you tell?

The Strain (FX; Sunday, July 12) Season Premiere: New York City is being overrun with not-pretty vampires, and it's up to Eph (Corey Stoll) and Nora (Mia Maestro) to create a cure for the epidemic ... if they can keep it in their pants. NYC, you're also boned.

Sex&Drugs&Rock&Roll (FX; Thursday, July 16) Series Debut: A failed '90s rock band (featuring Denis Leary and John Corbett) gets a second shot at fame with a hot young singer (Elizabeth Gillies). This will be the second-wiggiest FX series after The Americans.

Wet Hot American Summer (Netflix; Friday, July 17) Series Debut: An eight-episode prequel to the beloved 2001 cinematic classic, all about the first day of summer at Camp Firewood—with all of the cast members anyone cares about! Bring on the short-shorts!

Sharknado 3: Oh Hell No! (Syfy; Wednesday, July 22) Movie: The chompstorm hits Washington, D.C.! Ian Zering and Tara Reid are back! Mark Cuban is the president! Ann Coulter is the VP! Like you needed any more reasons to root for the sharks.

Fear the Walking Dead (AMC; TBA) Series Debut: A six-episode flashback to the beginning of the zombie apocalypse, set in Los Angeles. No "renegade biologists" involved.