A few hints as you fill out your viewing plans ahead of the virtual festival.

Next week, the 2021 Sundance Film Festival begins—but not in any way we've ever experienced it before. The annual independent film showcase has gone almost entirely virtual due to the COVID-19 pandemic, with a smaller slate of films, and people around the world will have a chance to experience the programming from their own homes.

One thing that remains the same, however, is the question of what to watch with the time (and tickets) you have. Sundance has always been a place for discovery, including many first-time filmmakers, meaning that some of the best work only emerges once the festival has begun. So how can you get a sense for what you might be interested in?

With the caveat in mind that I've seen none of the films in question, here are some possible guidelines to consider when planning this year's festival viewing. Even these few hints might steer you in the direction that's right for you.

Familiar Faces: Premieres with big-name actors will be in much shorter supply this year, but you can still see folks you've seen in other movies. Actor Robin Wright stars in her own feature directing debut, as a woman heading into the wilderness to deal with a tragedy in Land. Mona Fastvold, who brought her psychological thriller The Sleepwalker to Sundance 2014, returns with the period piece drama The World to Come starring Katherine Waterston, Vanessa Kirby and Casey Affleck. Nicolas Cage plays a criminal sent on a rescue mission into a frightening alternate universe in Prisoners of the Ghostland, by celebrated Japanese director Sion Sono. Michael Cera, Zoe Kazan and Lake Bell are among the cast for the kooky-sounding Cryptozoo, about employees at a zoo displaying mythical creatures questioning whether the beasts should remain hidden. The Office's Ed Helms plays a man who develops an unexpected relationship with the woman hired to be the surrogate for his baby in Together Together. Tessa Thompson and Loving's Ruth Negga play light-skinned African-American women deciding in 1920s New York whether or not to try to "pass" as white in Passing.

Familiar Filmmakers: Yes, rookie directors are out in force at Sundance, but there are some with a little experience under their belt, and whose work might be familiar to those who are festival regulars (or even just moviegoing regulars). Among the more high-profile names is director Edgar Wright, although he is moving out of his comfort zone of genre pleasures like Shaun of the Dead, Scott Pilgrim vs. the World and Baby Driver. Instead, he's taking on a documentary, profiling Ron and Russell Mael of the cult-favorite band Sparks in The Sparks Brothers. Also on the documentary side, director Rodney Ascher has been at Sundance previously with Room 237, about the wild theories surrounding the 1980 film version of The Shining; here, he continues looking at strange beliefs with A Glitch in the Matrix, about people convinced we're living inside a simulation. Director Nanfu Wang, who explored a controversial aspect of Chinese political history in 2019's One Child Nation, now turns to the cover-up of the coronavirus epidemic with In the Same Breath. 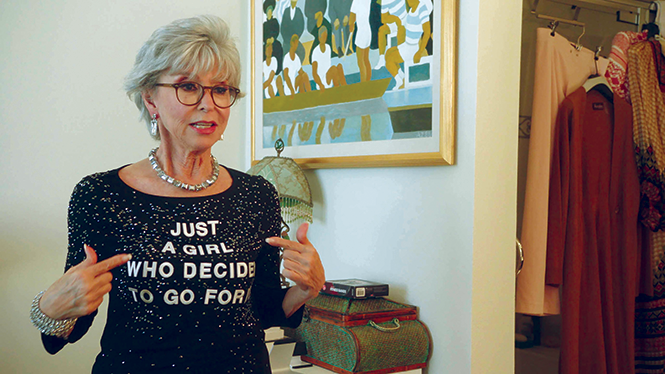 Intriguing Subjects: Sundance documentaries often provide a chance to dig deeper into subjects that are already of likely interest to you. The perils of the technological world are at the center of a pair of films in the U.S. Documentary Competition: Users, contemplating a generation of children growing up with devices always around them; and All Light, Everywhere, which explores the intersection of cameras, surveillance, policing and the justice system. On the lighter side, the history behind one of the most beloved shows in television history is at the center of Street Gang: How We Got to Sesame Street. Among other biographical profiles: pioneering diver, cinematographer and conservationist Valerie Taylor—who filmed the real sharks for Jaws—is the subject for director Sally Aitken's Playing With Sharks; beloved multi-award-winning actor Rita Moreno takes center stage for Rita Moreno: Just a Girl Who Decided to Go For It; and groundbreaking African-American choreographer Alvin Ailey is the subject of Ailey. And in a story that might feel too relevant in January 2021, the documentary President looks at an election in Zimbabwe where the principles of democracy are tested. So much for escapism!